Like most people, I want my product to either do one thing perfectly, or everything pretty well. I can’t afford an iPhone or the service plan, so I’m going the other direction and looking for a beautifully designed phone that doesn’t have a stupid qwerty keyboard, isn’t too bulky, and doesn’t have a whacky mechanism. In a perfect world, it wouldn’t have a camera or a bad interface either, but beggars can’t be choosers, right?

Any suggestions? (I’m on Verizon but would be open to switching)

EDIT: Looks like this one might be a winner if it doesn’t break on me immediately. $20, clean, and even has a few nice features on the outer screen ike caller id and touch alarm toggle. 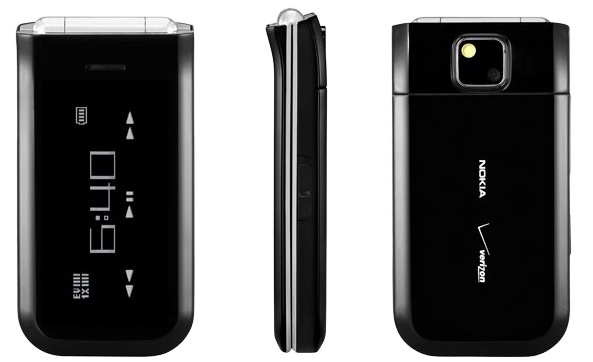 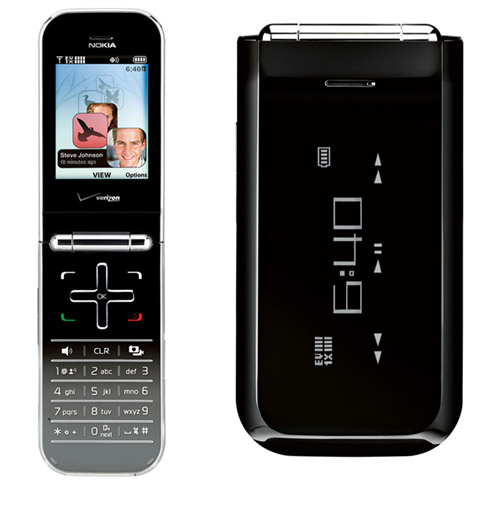 I was looking at phones a while ago with just about the same attitude as you. The phone you showed was the same one that came out as the winner for me.

Like most people, I want my product to either do one thing perfectly, or everything pretty well.

I think that is a pretty good product shopping principal, and that Nokia is very nice looking. Will be interesting to see how it feels and lasts. 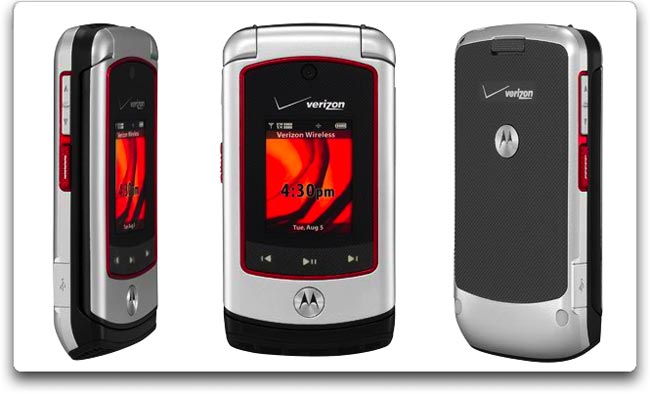 It looked great in the store, but has proven (in five weeks) to be a complete pain in the arse. I purchased it (for work) because of it’s “push to talk” feature. It has to be in my pocket because it would get ripped off my belt in a minute, but the side keys are so easily activated that it is constantly chattering away asking me for a voice command, trying to log onto the internet, or making other unintelligible noises. The face has minuscule finger detents so opening it is difficult. But at least I only paid $107 for it… . .

Funny how you don’t notice the little things until you have a device for awhile.

[a] phone that doesn’t have a stupid qwerty keyboard, isn’t too bulky, and doesn’t have a whacky mechanism. In a perfect world, > it wouldn’t have a camera > or a bad interface either, but beggars can’t be choosers, right?

Well, if it did have a camera, make it comparable to the best point and shoots in controls and quality and then it will be worthwhile. I just don’t see how a low-quality photos matter on such a crappy screen.

Sorry Cameron, mia culpa … I did not make myself clear. I was “why not-ting” why shouldn’t beggars be choosers.

My perfect cellphone would be strictly a cellphone with phone related feature (contact list, voice mail, etc.) and a calculator. And with all that extra “cost” not involved, maybe the crappy screen could be of sufficient size not to need my glasses to read it.

And again, it shouldn’t cost more than $9.95 including the charger … which is another pet peeve of mine. I have a drawer full of chargers, phone charger, camera chargers, AAA battery chargers, san diego chargers, MAKE THE FREAKIN’ THINGS UNIVERSAL! or at least adaptable with individual cord set for a particular appliance.

With the Federally subsidized LifeLine and SafeLink programs offering free and deeply discounted cellphones and minutes to welfare, and lower income individuals, this would be the ideal device to supply them.

We’re on the same page Lmo. Aren’t universal phone chargers coming out soon? I thought I heard that somewhere…

My perfect phone would probably be a gen2 ipod, with a capability to call people, without other features.

Im not too dependant on my phone, and actually dont like getting phonecalls from people i dont know or havent set up a phone meeting with. (although, at the moment, its only my parents and GF calling, hope it doesnt change)…
Got a cheap 2g Iphone from a friend, to be able to browse and get e-mails, and do not really care/use the phone function.

moto made one. I’ve always been curious about this guy…

supposedly the battery life is nuts.

#hellomoto | Discover our new unlocked Android phones from motorola and stay informed about our offers and promotions.

I pulled my new phone out of my pocket this morning to find a crack all the way across the front face.

I have no clue how it happened; if I’d taken a shot hard enough to crack the face of this phone I think I would have felt it. Too broad of a surface, insufficiently supported.

Last time I buy anything but “the cheapest”.

Whatever happened to form follows function?

Whatever happened to form follows function?

yeah, I know what you mean. 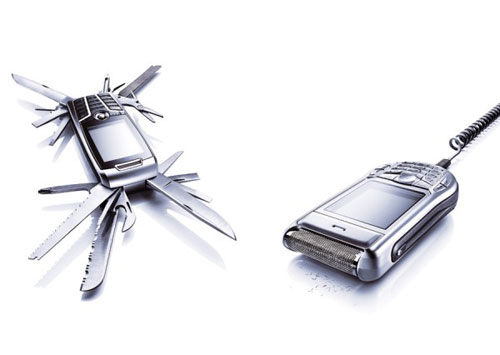 I actually bought one of those Motorola F3 phones out of curiosity as it was the only phone on the market to use the E-ink screen technology which makes battery life unbelievable for standby as the screen sucks no power! They are also pretty good to use as long as you don’t text a lot (as the screen shows one line of text, which is ok if you need to send a quick ‘OK’ but not for text talk) They are also pretty indestructible due to a simple construction and the E-ink screen, which also isn’t effected by glare. I believe they were designed for users in developing nations and places where workers would spend days and even weeks away from home without power but needed to be contacted, hence the low construction price and long battery life.


There is less chance than ever for a amazingly designed simple phone to be produced due to the “app-store” phenomenon. Why would a company spend millions on designing simplistic phones when all the money is to be made in after sales apps. The people who want a phone which just has dial and voice mail are a lost cause as:

If you were a CEO of a phone company would you cater for the poor kid with $9.95 and make him the best phone in the world that makes him use 150min per month rather than 100min. Or the richer kid who purchases a phone for $300 then spends a futher basic $40 per month on a 24month contracted network plan with an added $20 on addition apps.

So today you will find it nearly impossible to find a great simple phone as they just don’t exist, but if you really want a basic phone just go on ebay and buy a second hand 1990’s erricson or nokia. That way you are keeping a phone away from the landfill, helping out a kid buy a new ps3 and getting a good quality phone that does everything you need for little cash! We live in a society where there are more phones than people so any new device should be a well considered advanced product which can do away with other products we crave such as mp3, and point and shoot camera and toaster. Pointless object of the 20th century that have a place in the history books. Do we need 8 separate devices, isn’t that just more plastic crap?

So get an old school phone and save the planet while looking cool and retro.

p.s http://www.reghardware.co.uk/2007/10/05/post_a_phone_concept/ by priestmangoode concept phone. The only new none smart phone that could have a place in the phone world.

You know Mr., there were only two things wrong with my old war-horse of a phone; the camera had quit working (like I give a ratzass about a phone camera), the battery was a goner, and it looked like it had been drug down a gravel road (okay, that was three things). But the cost of a new conformal battery pack was like $68US. That’s nuts.

But at this point I would have been ahead of the game. At least the old phone was seemingly bullet proof; we’ll see how long the integrity of this device holds up. And speaking of Motorola battery life, there is nothing “unbelievable” about this one; thirty hours is the max. I’m extremely disappointed with this Motorola product.

At this point I’m thinking that a cellphone that uses standard AA rechargeable batteries would be the deal. I don’t really care whether it is smaller than a cigarette pack, as long as it’s durable, and “refreshable”. A new phone every eighteen months is ridiculous, not to mention environmentally irresponsible. The wall phone in the kitchen wall has been there for eighteen years; there should be an equivalent bare-bones cellular device.

I’ve never had good luck with battery life in Motorola’s. Even after the first few charges it seems like the life is cut in half. My Samsung Gleam seems to be working at about the same level for 2.5 years now. And I haven’t had anything break on it yet. And it resides in my front pocket all day, every day.

I think its aimed at seniors but…

wish they had a shot of it closed, but looks nice and simple.

Personally I’d never buy a Motorola again because of their terrible OS (The Droid is a different story as it runs Android). In terms of a phone phone, I’ve always like Sony Ericsson phones/OS.

I just don’t see how a low-quality photos matter on such a crappy screen.

I used to think the same, but sometimes the subject is more important than the quality, a bit like photo doodles.
When you see something inspirational but don’t have a real camera at hand for example.

Since my current phone’s battery can’t survive two phone calls anymore I’m looking for replacement too.
Apart from what I already mentioned it should be able to call and text, it shouldn’t be too expensive and ideally it should look good. A bit like the Samsung E590 by Jasper Morrison.

also a senior phone. Done by Ergonomidesign for Doro, a company thats started focusing on “care electronics” with great success.

But to me it looks pretty decent. cant really grasp the size though.