A New Line of Ride-on Toys

I’d think about the user semantics a little closer. A little kiddy, or me, needs to be able to look at it and in 2 secs KNOW where hands go, feet go and butt go. It’s not quite there yet. It might be as simple as color adjustments.

Your “bent plywood+ molded attachment joints + bent tubing endo skeleton” has a lot of potential to be a really elegant 3D composition, but again, it’s a lot of gestures and parts right now that seem arbitrary in relation to each other. Personally, I’d ditch the plastic “joints” and get the plywood parts to do more for you. I think the tubing frame can be simplified a lot too. I’d look at some furniture that uses bent tubing or bent rod to see how to better hit all your hard points in a more elegant way.

Some scale models with paper clips and chip board will help a lot with this distillation process.

also agreed that rear steering might be a little wonky

looking forward to see how this and the other 2 toys end up.

Thanks for the suggestions everyone.

I have started thinking of better solutions on attaching the bent ply pieces together, this concept uses wood triangles with mechanical fasteners (which I would probably hide) to complete the structure.

As far as the caster, I probably drew it a bit out of perspective (too far from the main body), it would be closer to the body of the ride on, and I was basing it on forklifts that have rear steering. From what I have seen, as long as both wheels rotate independently, I think it will steer ok. I will have to build some mock-ups and see! 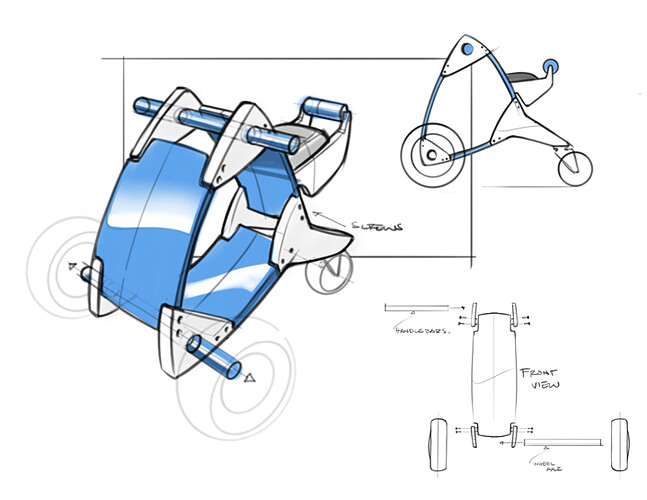 Here’s a bit more proportional side view of the new attachment system. 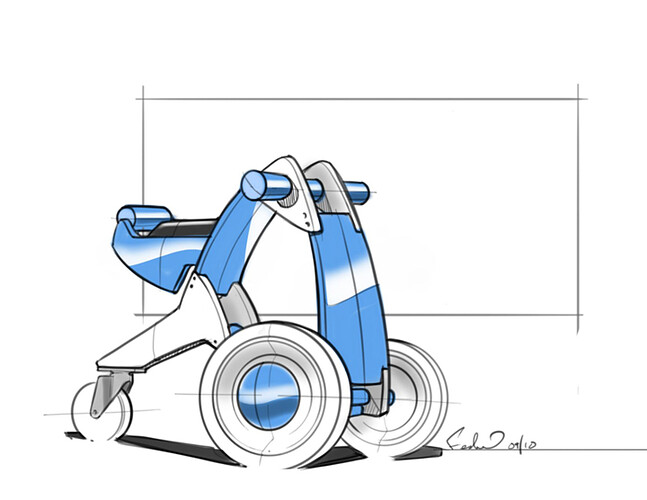 that empty space right below the seat looks like a hotspot for injuries? isn’t there some clearance (jeff told me about it last semester) for fingers? Also not too sure about the cylinder in the back. does that spin? what’s the purpose?

most of this looks nice, but the part that’s the most unresolved is the castor wheel area. if you cover that up this looks nice otherwise (although a little sharp in certain places for a kids toy)

As far as the caster, I probably drew it a bit out of perspective (too far from the main body), it would be closer to the body of the ride on, and I was basing it on forklifts that have rear steering. From what I have seen, as long as both wheels rotate independently, I think it will steer ok. I will have to build some mock-ups and see!

Yes, but on a forklift that rear wheel doesn’t rotate independent of steering. You can turn that wheel and hold it in position. With a swivel caster, no matter where you place it, it will rotate freely where ever it wants to. If you find away to link that to a steering mechanism, this concept would have much better chance of working. In my opinion.

If you’re asking a 3 year old to hop on and try to get somewhere, they might have a tough time.

First off, got sketches, nice to see this level of sketching applied to this type of product.

OK, to be critical, why molded plywood? Looks like you plan to paint it gloss, getting rid of the beauty of the materiality, and the bent arcs are so shallow, they might as well be just flat pieces of hardwood, or minimally shaped

My suggestion would be to either ditch the ply, or develop more of a reason to have it, and show it off.

Agreed that there seems to be some potential pinch points that just don’t need to be there.

I don’t mind the idea of back caster, and it could be fun, but you have to spec a caster that goes with the design and not be limited to Home Despot. Check out Doug Mockett’s online catalog, a lot of fantastic casters there.


My vote is for the hubless one

those casters are effin sweet. i think those could help resolve your back design a lot

Nurb - I think you’re taking the caster a little too seriously. As a ride on TOY, this is not really meant for going to grandma’s house down the block. I imagine this more of a toy where you just scoot around on the driveway or indoors, doing drifts and whipping around with the caster.

It all depends on the target user age. You there’s a good reason that scooters like this for 1-2 year olds have fixed wheels. If this is larger for a 4-5 year olds (or older), who already has a well established sense of balance I don’t have as much of an issue with it. I’m assuming that this is for the younger set. Am I wrong?

Nurb, My target user is an active 4-5 year old, a kid who already has a well developed sense of balance, and will want a ride on that is just one step behind a push bike.

Yo, those are some sick casters! thanks for the link, I saw that hubless one and fell in love. I was originally going to get them from McMaster Carr, but you’re right, these are more for very industrial purposes and don’t have a very pleasing look. Those Mockett ones are much nicer for this type of product.
For the front I found these never-go-flat rubber tires with a solid metal hub, they have some nice bearings so I hope to get a pretty smooth riding toy at the end.

I have noticed the pinch points and the more I draw this thing, I think the softer and kid friendlier the forms are becoming. As far as my plywood choice, it was more of a technical ability thing, seeing how we have the machinery here to make those shapes, since our shop is mostly a woodshop(not many metal tools).
But its true, if i’m going to use it it should be more apparent as to what it is. These next concepts have more of a bend, which I integrated into the “hump” shape of the gastank that racing motorcycles have, and this will technically reduce the number of parts.

I wanted to go with a gloss color way since I am taking aesthetic inspiration from fast vehicles, and from doing some existing product research, there are enough high end toys out there that are just naked wood. I want something that will appeal more to the kid, instead of just to the modern parents.

I know that I am still not there yet, but this is what its turning into, crazy different than from where I started, now with the hubless caster: 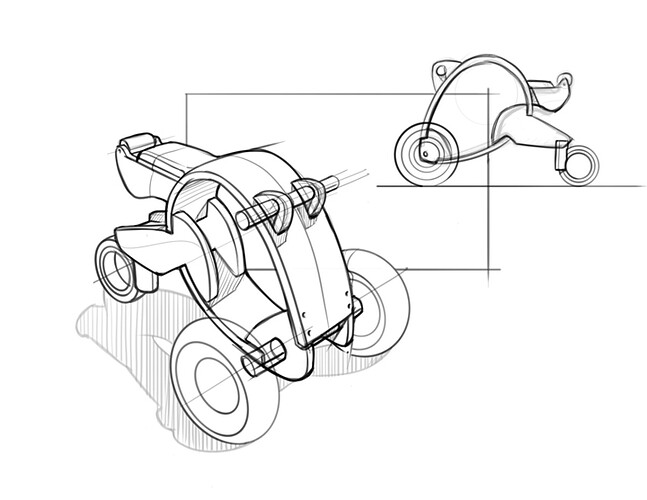 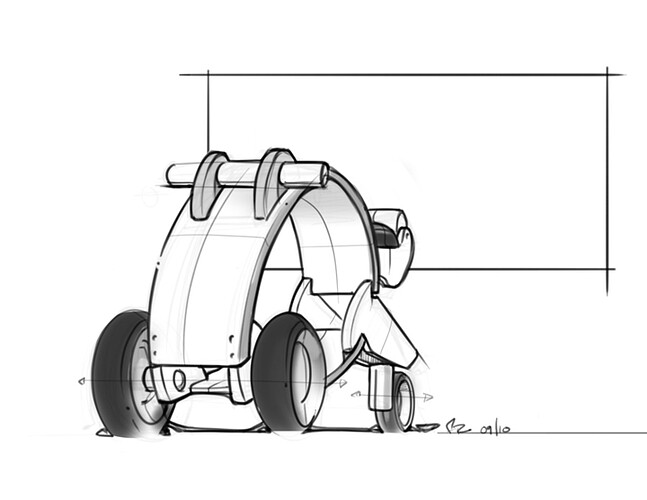 That hubless caster is so cool! Yeah the overall design is good and the sketches look really good. Are you able the integrate the backrest of the seat better so it doesn’t look so ‘tacked’ on?

True, true. The seat area in the back does feel like an add-on still, Im gonna keep sketching different forms and see how it develops…

That was totally awesome! I wonder if how many days did you make it?

Thanks for the comments guys, I had an interim presentation(I just posted it on the blog, if anyone is interested) with my classmates and received a lot of feedback as to construction methods, material choices, etc. I’ll continue ideating and will start making some cardboard and foamcore models later today.

Since I am now super fond of the hubless caster, I might as well make the ultimate ride-on. Once kids see this, they’re not going to want to ride anything else.

With the Tron Light Cycle Ride-on (props to Syd Mead and Daniel Simon), now every 4 year-old can have transportation in the grid. 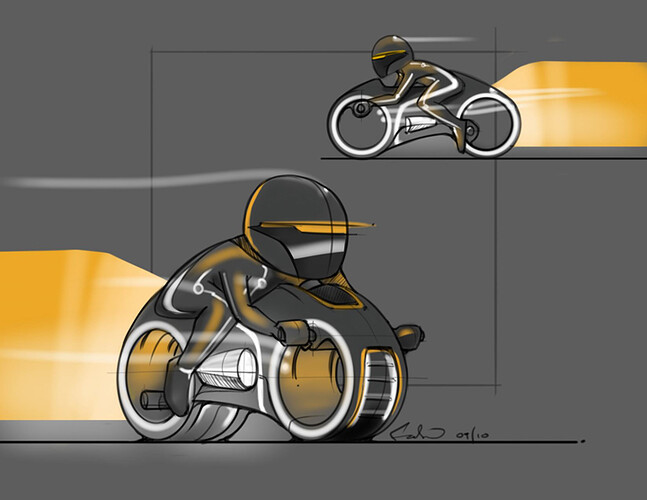 Oh boy. You should be aware of this post: The Official Hubless Wheel hater thread.

The sketches and ideas look great. I think you should start getting into a full-size mockup ASAP - even a foam core. It will definitely inform your sketching and direction.

Regarding that hubless caster, I have a few and they roll like garbage. They’re super expensive, too. I’d say use whatever is easy for a works-like model, and design your own badass caster for the looks-like model and renderings.

design your own badass caster.

yes, absolutely do this. it is the design of these types of details that separate good design from great design. you have a cool concept now make it shine with the details.

The sketches and ideas look great. I think you should start getting into a full-size mockup ASAP - even a foam core. It will definitely inform your sketching and direction…

Definitely, probably should be a foamcore mock-up or three before you get into wood…

Really digging the project. Looking forward to seeing how it shapes up.

Man I’m having so much fun with this project, if I didn’t have so many other classes I’d be working on it 24/7.

@Optimistic, You’re completely right. I was always in this mentality that I had to make my finished model look exactly like my design intention, but I think I will come up my own caster, something that fits within my design, and use a good performance, cheaper caster for the functional prototypes that I make in the end.

@NURB, I read that entire hubless hater thread, pretty funny stuff, and now agree, just because it looks cool and unconventional it doesn’t mean that it’s better, I think i’ll stick to good quality casters and wheels with good bearings in them.

As far as an update for the day, I used some Dreyfuss charts and made your typical 4-year-old out of foam core with articulating joints.
I posted a pretty hilarious video on my blog. I will use him to make sure my models are to scale so that I can then later on test them with actual, human 4 year olds. 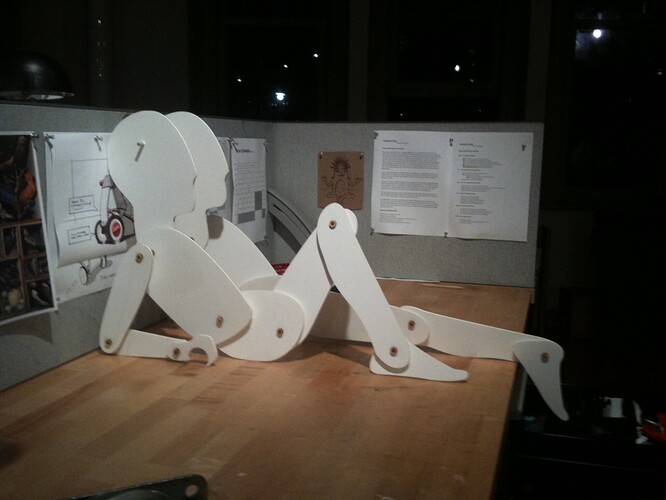