A city councilman in Utah , Mark Easton, had a beautiful view of
the east mountains, until a new neighbor purchased the lot below
his house and built a new home.

The new home was 18 inches higher than the ordinances would
allow, so Mark Easton, mad about his lost view, went to the city
to make sure they enforced the lower roof line ordinance. The
new neighbor had to drop the roof line, at great expense.

Recently, Mark Easton called the city, and informed them that
his new neighbor had installed some vents on the side of his
home… Mark didn’t like the look of these vents and asked the
city to investigate.

When they went to Mark’s home to see what the vents looked
like, this is what they found…

The City Council said the vents can stay since there is no ordinances referring to
shutter design. 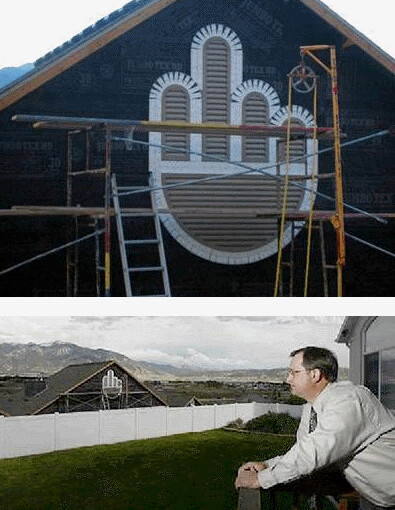 Worth every penny! Yes! These are exactly the whistle blowers I hate.

Nice!!! I currently live in a neighbor hood with an association. I used to have that next door busy body neighbor. It sucks!!

I don’t know if this is real … it certainly looks real what with all the scaffolding between the camera and the house it would have been a MF to photoshop this.

In my heart of hearts, I hope it is real. Pay paybacks SHOULD be a bitch … but you have to admit, before the new neighbor built his grand manoir, the guy had an incredible view.

Still, what goes around, comes around.

Howie Mandel recently moved into a new home ($$$) in LA. He’s already thinking of moving because one of his neighbors is an old cranky fart that keeps calling the police and city complaining about stuff.

A few months back, one of his neighbors had a charity event from 4-7 in the evening. The police were there for traffic control and the neighbor spent the whole time telling the police how they needed to shut the event down because of the noise. What a a-hole.

This is the part of government that I think needs to be reduced. Note that it’s cities and counties, not federal or state.