50th anniversary of a great car

It may go unnoticed stateside, but it is the 50th anniversary of the Citroen DS. The DS may be the most important car ever. In engineering it was a gallic triumph sporting self-leveling hydraulic suspension, semi-automatic transmission (a normal manual with an hydraulically operated clutch), hydraulic assist on steering and brakes, in-board front disc brakes, front wheel drive, fiberglass roof and aluminum hood. All of this in 1955!

On the styling front, the Citroen was so different that it seems like we still aren’t ready it. Flowing aerodynamic lines integrating beautifully with functional elements, like the rear turn signal trumpets located on the trailing edge of the roof. Inside, the DS sported the industry-first plastic dashboard. Other than the single arm steering wheel, the rest of the interior was a well-trimmed conventional interior.

Let’s hope that someone allows their designers and engineers to thoroughly rethink transport like Citroen did on the DS. 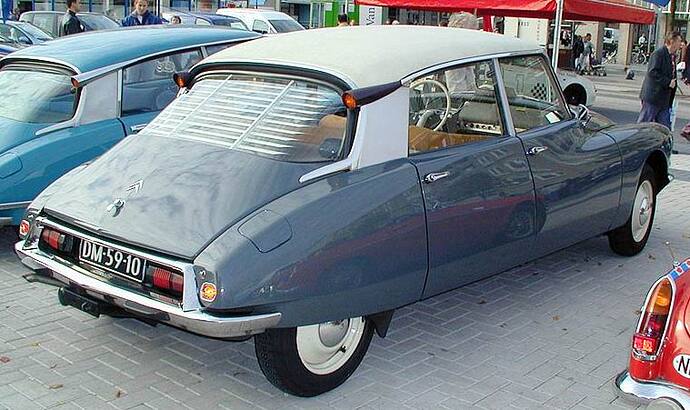 Technologically it was way ahead of it’s time.

Financially it was an R&D disaster.

Asthetically it’s nothing more than a curiosity to me.

really sweeeeet - more appealing in terms of styling than 80-90% of this year’s models. That’s right - even better than the hard edge (but transparent) tough-guyness of American styling - which I’d judge as the strongest look out there now.

Citroens of the 50 years agoï¼Œand to be rated as the classic to make on the design of the automobile, its emergence changed the automobile of the United States.I feel get hold of today to it on the market, it still has a lot of a little bit bright.