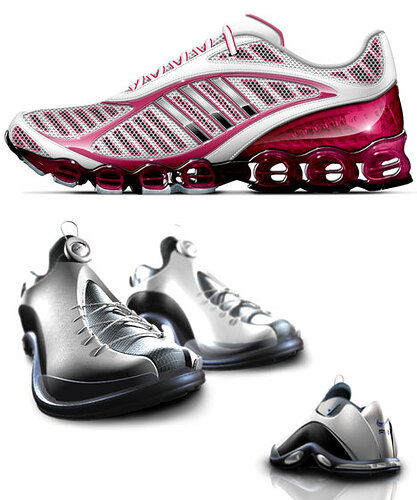 Wow, that’s a man who really knows his tools. The lateral renders are really impressive, but that perspective render of the Nike kicks, that one takes the cake right there. That can’t be PS or Illustrator?

That’s really impressive. Wondering if the sole is just a retouched photo of an existing sole. In that case I could see the rest being done in 45 minutes.

Id love to see a speed rendering of his work flow though.

I agree with billymenut, once you have the formula and experience things go much faster. I will say that those rendo’s are some of the sickist i’ve seen!!! Awesome job!! That is the difference between dabbling and getting paid for it. Well done Cheng Kue!!!

and check the model itself.
big footwear companies use to put on the shoes big logos,that means less pieces on them,cheap uppers.

what happen when firms havent got big logos? you have to find the way to complete the spaces on the shoe.

that profile design doesnÂ´t have any mistery,is quite simple.

the bottom one (perspective) is alias. The top one and others in his portfolio are PS i think, or painter? I went to school with the guy (he was about 2 years ahead of me) and he just learnt the tools on his own and became an animal. his quick viz skills are out of this world. 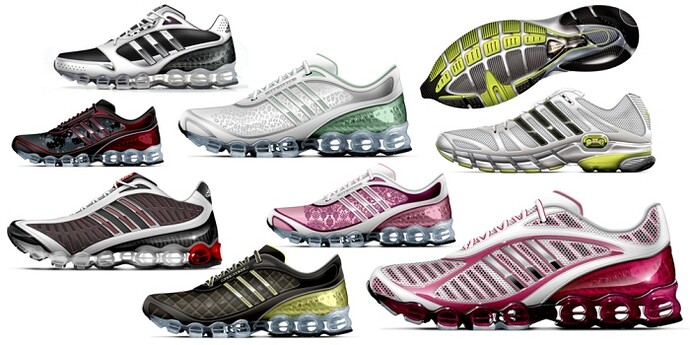 First off, sick-ass renders, for sure. Cheng has the $$ skills as the kids say.

For those questioning the time it takes to do these, I notice there is a reuse of assets among these concepts, the sole, the general line breakup and a few details. It’s more a matter of texture/pattern/color change, tweak the paths, and some fast layer styles! If he had a library of patterns/fabrics this would expedite the process further. It’s definitely doable.

There is nothing wrong with reusing parts of renderings (i do it all the time), but to those who are inexperienced, the implication that each one was done from scratch in 45-50 minutes is misleading. It may have just been read incorrectly by some.

it’s stuff like this that makes me want to just quit my job, run home, power on the computer, break up with my girlfriend and focus on hardcore improvement of my techinical skills. geez, this guy is a monster.

that’s exactly what i thought when i read the article. i mean, part of it was curiosity, part jealousy and just part astonishment. 45 minutes to crank out stuff i would probably spend a week on!

i would love love love a render demo or a step-by-step…not because i don’t believe, but his renderings are so tight that i’d love to get on his train of thought.

i’m officially starting a petition to mr kue as of right now…share some knowledge, please

no offense, but his stuff is strait up almost photorealistic. i mean, if you and me said we crank out our stuff in 45, people wouldn’t look at it and not doubt, but amount of detail he puts into his 45 puts us to shame (again, no offense, it’s just me being honest…and notice i include myself in there too). he’s not just on a whole 'nother level, he’s from another planet compared to you and me when it comes to rendering skills. and so for him to claim 45, i want to know how fast he renders and what is premade.

I agree with bennybtl, to do that pink adidas bouce shoe from scratch in 45 mins would be damn near impossible, but it looks as if maybe he tweaked a photo of the sole maybe, and the clear area where the footbed shows through on that shoe is a photograph pasted in there i think. it is possible that it is all real and not photograph retouch, but im just saying that it would take at least 45mins alone to render that outsole if it was done from scratch.

but again if he had the soel done and then just redid upper son it, then yea 45 mins is all it takes.

definately props to him! dont see too many on that par too often.

I know cheng pretty good…worked with him. The guy has some skillz! I can’t vouch for these being done in EXACTLY 45 min but I wouldn’t doubt it. Not all of these are done from scratch. There are some quick tricks and photoshop magic that Cheng is good at. 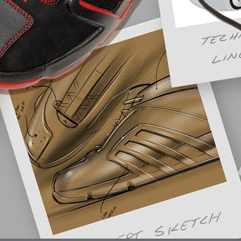 great stuff no doubt. I do somehow doubt the 45 min. from scratch thing though, not sure where that came from in the core post. I’m quite fast in Illustrator/PS, and even with the best workflow possible I can’t see these being done in 45min from nothing with no templates, outsole line-art, etc. Not trying to be a hater, but just my 0.02$ worth.

Either way, even if it’s 2 hours per render it’s excellent work! Very inspiring!

If he’s talking about each rendering of the same design but with different CMF, then yes, I do believe that 45min is reasonable.

For me, I create paths in Rhino, export them to Illustrator and go from there. So if I set up my paths right in Rhino, I can be cranking different renderings of different finishes pretty quickly. However, if you consider the time it takes to do the path and such, the very first one can take 1.5 hours or more. Every one that follows will just get quicker. It’s just the matter of changing color and texture in most cases. You just got to work smart.

some of the kids in the factories can bang out cool renderings so fast it makes your eyes water, but then they have SO MANY actions etc set up in ps its incredible. like you click on a panel or selection, hit the action you want and it’ll render each part with one click. they have literally years worth of automated actions, masks & filters all sitting there waiting for you to select and ‘press play’…

on closer inspection of this guys work i think the most logical explanation is that he is probably a cyborg, or at the very least a computer generated ‘matrix’ type entity.
definately not human.

[quote=“styleRIZAL”]it’s stuff like this that makes me want to just quit my job, run home, power on the computer, break up with my girlfriend and focus on hardcore improvement of my techinical skills. geez, this guy is a monster.


not to brag, but that is how I got good a driving. (on a track)


When I started using illustrator It might take quite a long time to get a nice render out. But now that I have been doing it for awhile it dose not take too much time at all. I think 50min is legit. As afore menchined a lot of the stuff is the same with a little manipulation.

not to brag, but that is how I got good a driving

notke brings up a great point about using the automation process that’s on PS. i mean, i’ve used it for things like making one of those collages where, from far away, it’s one picture, but when you get closer, it’s a bunch of smaller pictures…but i never thought of using it for rendering purposes.

i have yet to scratch the surface of PS and illustrator’s capabilities and potential…and that’s so scary.

back to the subject at hand…yeah, the midsoles are def pictures tweaked and there are elements of the shoe that are pictures and not renders, so i can see the 45 minute mark.

from start to finish from a blank screen though?..i won’t say he can’t do it because i don’t know the guy. besides, with all the aforementioned shortcuts and quick-renders one can do on PS, who’s to say it’s not just a few drags with the lasso, selections and clicks?

which brings up the question…when almost all of it is rendered via an automatic process, how much of it is art and skill, and how much is mechanical automation? does the automation negate or lessen the creativity and free-flowing natrure of the design and does it take away from the artist in terms of taking full credit for the beauty of the design?