4 Design Ideas for a Nike Next% Killer

Some thoughts and sketches from an article I wrote- 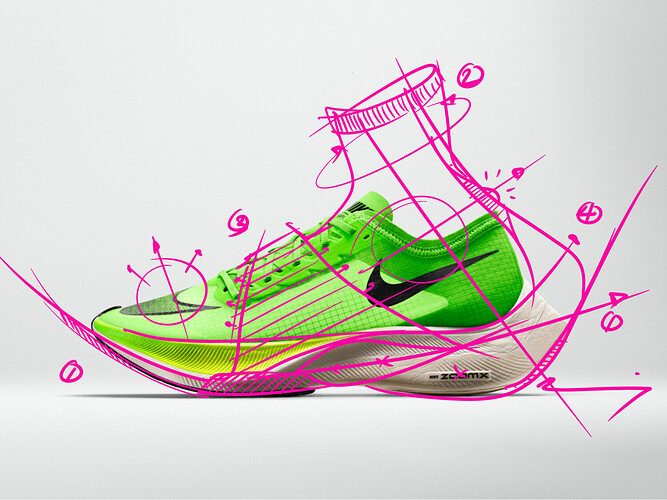 4 Design Secrets of The Nike Next% Killer — The Directive Collective

To beat the Nike at their own game, is impossible. Playing catch-up and following the same formula, but 2 years later, is a losing proposition. 4 big ideas on the future of running shoes.

As a marathon runner (@rkuchinsky on IG) and footwear designer with almost 20 years experience, it’s certainly an exciting time to be in the industry. Innovation is charging ahead and questions are emerging: how will the future of footwear change the sport? What limits, if any, should be put on running shoe design?

Even if you are not a runner, you’ve probably heard about how Eliud Kipchoge, wearing the latest pair of Nike’s prototype shoes- the “AlphaFly”- ran 26.2mi/42.2km in 1:59:40.2. Faster than any other human, ever.

While perhaps the greatest record to fall recently (along with Brigid Kosgei’s official 2:14:04 marathon in Chicago) Kipchoge’s achievement is only one in a huge list of world beating performances that all have one thing in common - Nike’s super fast, extra bouncy, carbon fiber plated shoes, that some say are too good.

Despite the fact that some athletes have complained about and questioned how these shoes affect the fair playing field, it’s no secret that running shoe companies are taking an “if you can’t beat them, join them” approach. Last week at the industry trade show The Running Event in Austin, Texas there was no shortage of running shoes featuring next generation foams with increased midsole thickness and carbon fiber plates. Saucony has one (or more), as do Asics, Brooks, Sketchers, New Balance, etc. “But here’s the thing - These shoes are already out of date, and playing catch up.”

Designing, developing and producing shoes is not easy. It takes time. I’ve brought to market over 100 shoes from sketch to shelf. From Design to Development, testing, commercialization, production and shipping the process can take easily 18-24 months. And that’s usually for a pretty straightforward style with not much new tech. I finished tech packs on new upper designs for Spring 2021 for a major running footwear brand this past August. Had these shoes been on a new outsole, even with existing technology, the designs would likely be done a minimum 6-9 months earlier to account for additional time to make the 3D CAD, injection and compression outsole molds, material engineering, weartesting, and commercialization.

If you are creating something truly new, it takes even more time. Nike announced their first “super-shoe”, the $250US Vapor Fly 4% (so-called because it allowed you to run 4% faster), in December 2016 with a sold-out mass release in May 2017. An “Elite” version was used later that year in the Breaking2 Project where Kipchoge ran 2:00:25.

Adidas announced a similar Sub2 Project in 2017 (that never happened) followed by the release of their $132US Adizero sub2 shoe that went straight to the discount racks.

As it turns out, it’s not as simple as sticking a piece of carbon fiber into some foam. In fact, contrary to popular opinion, the carbon fiber plate is not a “spring” and is likely there to provide a stabilizer function, increasing stability and controlling the loading and unloading of force provided by the midsole material (possibly providing some feel of forward propulsion). The midsole foam itself is key, decreasing overall weight, and increasing rebound. For a full scientific analysis of how this may work, I highly suggest this Real Science of Sport podcast- “The Shoe That Broke Running”.

The latest Nike AlphaFly apparently uses 3 Carbon Fiber plates with an additional Zoom air bag to augment the special React and ZoomX midsole foam materials with an additional 10mm of midsole over the already stacked the current Nike Next% released just a few months ago.

But there’s only so much midsole thickness that can be added and only so much you can control with carbon fiber plates before you have an unwieldy mess. And forget the terrible idea of trying to put actual springs on your feet. Or springs made out of plastic.

To beat the Nike at their own game, is impossible. Playing catch-up and following the same formula, but 2 years later, is a losing proposition.

To truly design and develop the next generation of performance running shoes will take a “Big Idea”. So here’s some Big Ideas…

Adidas tried to make a shoe that somehow adjusts to your gait, but trust me. It didn’t work. Most runners these days use a watch to keep them on pace and manage splits. Some runners track heart rate and power output. What if your shoes actually responded to you, as a runner in real time?

As every designer knows, ideas are one thing, but execution and concept is another. If you are looking for your own Big Idea or want to execute on these, contact me. > 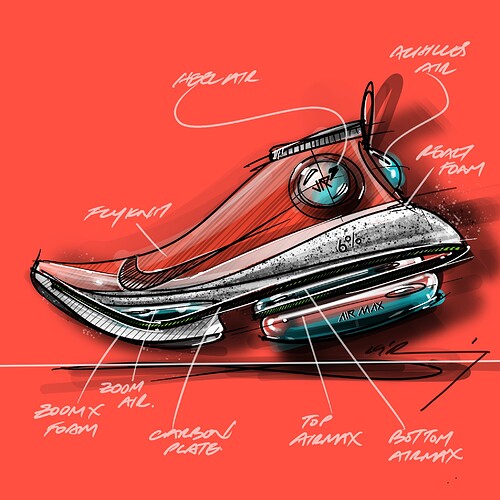 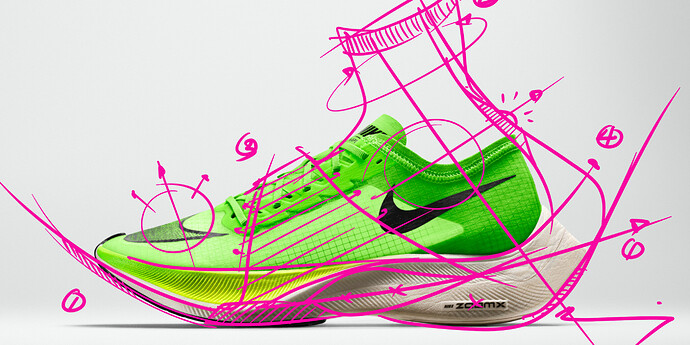