Any one know how they molded the rear housing on the new iPhone?

It has an undercut, but there’s no visible witness line (or even sink marks). I saw some images of the inside of the housing and it looked machined to thin the wall, I’m guessing to reduce sink. (Only Apple would do something so completely insane!)

The decoration is also vexing. I though the text and logo might be IMD / IML, but I’m not familiar enough to be able to tell if that’s possible given the depth of the part and undercut. The text on the housing is definitely not pad printed, which made me think IMD, but the registration of the deco around the headphone jack is too fine…I think.

Ideas? I don’t have the guts to pull/pry the housing off mine, but I’d love to know if anyone has…

Apple throughout time has had designs that defy most logical manufacturing methods (draft? Screw draft!) and wind up pushing their manufacturers to get it to figure out how to make it work. I’m sure somebody could tell you, but then they’d have their hands chopped off.

Here’s a nice shot of the interior from this teardown site: 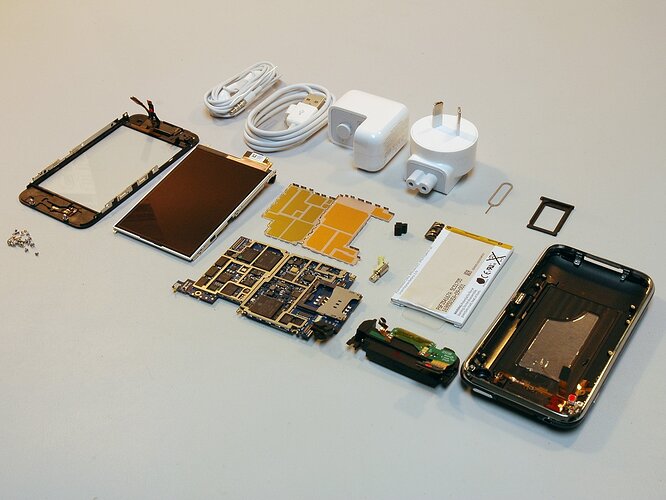 …Notice the ejector-pin markings. If there really is an undercut and its not the chrome-band that facilitates this, then there must be a jigsaw puzzle of slides involved.

I googled a little harder and found this…which seems to show that the metal band is more than a band and has a 90-degree internal profile.

…so now I think that this metal piece may be inserted into the injection mold, allowing the plastic to form around it without an undercut to worry about in the release.

Great find cg! We should routinely do a break down of an interesting product…hmmm.

A little birdy tells me:

The back case is injection molded PC/ABS with a high gloss tool finish, which is then hand polished to remove split line flashing. Speaker, mic and connector details are machined, logo is applied using some kind of PVC process, then the top coated with a clear hardcoat.

The metal bezel is glued and screwed in during later assembly.

That information is correct. It’s a clear polycarbonate that is painted black (I’m assuming white ones are the same). The Apple logo is a small sticker of some sort. It came off while we were plating the housing in 24kt gold. Talk about a pain in the butt.

The chrome buttons are molded plastic with a tiny chrome covers. Seems like they purposely made every part using the most difficult method possible.

I have detailed photos if anyone cares to see.

I would love to see the photos actually, I am very interested in the construction for this part, I have a bit of a bet going at work. How can I get them?

It came off while we were plating the housing in 24kt gold. Talk about a pain in the butt. .

Did you do that for Pharrell?

Motorola always painted with gold and silver. And so does everyone else.
It is a low cost light weight shielding method. believe it or not its low
cost because its thin. No extra part is added and the supplier of the
hosing gets to do it and ship the completed part plated and painted.