Hi, I’m new. I’ve been reading the Core blog for a while and thought I might jump into the discussions.

Sorry that my first post is so long, but it’s something I’m quite interested in.
Before you write it off as a rant (and it is to an extent), please realise that the purpose of this is not to discuss the legality or ethics of DIY gun manufacture, but instead, to look at what problems might occur if it goes ahead and how these might be prevented. If you dont want to read through all of this, please have a read from inevitability (highlighted at the bottom) and suggest how you think an open source 3D printed gun could be introduced safely.

Recently there was a post about Defence Distributed, a group who plan to release files for a 3d printable gun. 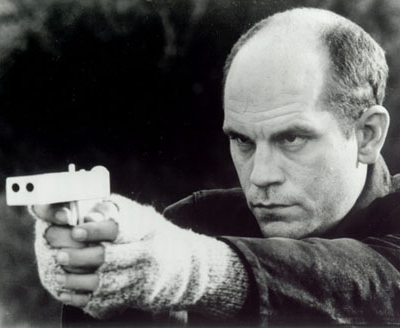 In the 1993 movie In the Line of Fire John Malkovich played Mitch Leary, an ex-CIA assassin hiding out as, get this, a design professor at Art Center in Pasadena. In the film Leary's said to be quite the modelmaker, and the plot has him cobbling...

In the comments, there was a bit of debate about the idea but also some unsubstantiated attacks on the author. This is an important discussion that the 3d printing and design industries must have. As such, perspectives are important, I feel it was unfair of some posters to chastise the author for presenting their ideas, in the same way that I would be wrong to outright say any other view is wrong without substantiating my points.

I come from a country with less of a “pro-gun” culture than the US, so I definitely understand the author’s sentiment. This will obviously colour my response to Defence Distributed’s goals, but please refrain passing judgement of my arguments until you have read through (Sorry it’s a bit long).

In terms of the legality of this endeavour, Defence distributed may not be breach of any law (although they may – see Undetectable Firearms Act of 1988). But that is not really the issue here. This project does have major implications for both the gun industry and the 3d printing industry

Technological advancements facilitate the good and the bad, but this is not a simple matter of good vs bad. Weapons are not bad, and printers are not bad because they can create weapons. People with weapons and intention to misuse them are “bad”. But people with no intention to misuse a weapon can also be “bad” if they lack training to use that weapon, but choose to use it anyway.

Certainly, if an individual wants to make a weapon they can. If they want to use this weapon for illegal purposes, they can try. Nobody is questioning that. However, outside of the realm of criminals, comparing the ability to manufacture a gun with a 3d printer as being the same a manufacturing one with a mill and a lathe is a fallacious argument. A mill and a lathe require certain skills to operate and are not easily accessible to the general public. Yes, many people have them, but they are hardly in every home. The population of 3d printers is growing by the day (and depending on which futurist you listen to, may be in many households in the next few years). On top of this, they are becoming increasingly easy to use. As I use 3D printers, this is fantastic. However, assuming that they do come into homes and these gun files are available, a serious problem occurs. Guns have a habit of being popularised by movies and TV shows as “cool”. Children are certainly influenced by this. Imagine this in the future where printers are ubiquitous (again, not necessarily far away). Children would be able to easily access these files and create the gun for themselves, printing it out on the family printer. I ran around with toy guns when I was a kid without really understanding what a real gun is capable of. Imagine this same culture when a the child can print the gun and bring it to school to show off to their friends. Without realising what they are doing, they could easily scare, injure or call their fellow students. This is especially poignant when the plastic 3d printed gun begins to resemble toy guns.

It is argued that easier access to guns will make it easier for people to defend themselves from “bad guys”. I would argue that a person who is untrained and inexperienced with a gun is as dangerous to themselves and others around them as they are to their attacker. I have no statistics to back this up and I will not insult your intelligence by making them up, but it seems a logical assumption (also, if I looked, I could probably find corroborating research). Those with a gun but who are not necessarily trained in using it or aware of safety procedures are dangerous to themselves (to use a clichéd example, the caricature of someone looking down the barrel of a gun after it has misfired or another shooting at “bad guys” in crowded areas without any perception of their surroundings). These are not simply cases of stupidity if they are not educated in proper gun care.

Assuming that a 3d printed gun can accurately discharge a bullet and can cope with the forces of said discharge, the lack of quality assurance between 3D printers could have fatal results. Poor quality prints could mean that the gun could potentially lack structural integrity and would not be able to cope with the force of the discharge. Obviously, the technology is advancing at such a rate that we do not know what it will look like in a few years. However, at the current stage of the DIY technology, there can be artefacts of the print process or the software present in the model. It is likely that these will have disappeared in a few years. However, if not, then a poorly calibrated printer could mean injury or death for the user

Also the pro-gun lobby keeps throwing around the idea that the anti-gun lobby is “scared” of guns, but should really be scared of much bigger weapons like home made bombs. I find this argument particularly frustrating. I mean, if you’re not scared, why do you need a gun in the first instance? Fear of having your home invaded is no different from fear of increased access to and misuse of guns. We are all scared, what we are scared of is not a relevant argument in any way and adds nothing of value to the discussion.

There is the argument for liberation if a government begins to abuse its populace. What despots do to their people is despicable, and they need to be removed. However, we must question whether an open source gun is the best solution to this.

Based on defence distributed and the pro-gun support, an open source gun seems inevitable. As such, while debating its value is beneficial. I feel it is far more important to start looking ahead to problems that may occur and how we as designers and reasonably intelligent people can begin to prevent these problems.

To me, the success of this project begins with education, if Defence Distributed wants to proceed with their venture, they must bare responsibility for educating the community of the potential dangers as well as safe conduct with a gun. It is not enough to release the files and hope that common sense prevails. To do this, they should work with schools, the 3d printing community, the government and the NRA to ensure that all stakeholder groups have a chance to contribute and can add their perspectives to the collective understanding of the project.

Defence Distributed are actively releasing the files and must be held accountable for providing why this is a good idea. To do this, they need to understand all the views involved. And I mean understand, not deride and sneer at. They must do more than espouse open source mantras and actively seek to alleviate concerns that might occur. They also need to reflect all views of the argument without persecution. It is important that they reflect as many views as possible to show that they understand the issues and to specifically state how they plan to deal with the problems that are raised.


My questions to you as a reader are these:

How else could this project move forward?
What assumption are you basing this on?
e.g. Whether 3D printers will become ubiquitous or not

Is there a better way to deal with despots than an open source gun?


Congratulations if you managed to read this far

atmo, a one-shot gun, meaning it can be shot only once, the barrel is ruined and cannot be fired again, is a silly waste of resources.

That said, I have no problem with people having their silly hobbies. I piss away a tremendous amount of resources on bicycles. So I am just as guilty.

But also knowing that the printed gun is an oddity at best, the usual pro/anti-gun control arguements are irrelevant. You can speculate the implications of a printed gun, but the most likely implication is that it will gain nearly zero acceptance due to its nearly complete lack of function.

“Is there a better way to deal with despots than an open source gun?”

CAD and a little (second hand) cnc mill and your much farther ahead for about the same price as a desktop 3d printer with out the worries about materials.

You don’t need a 3D printer to make an open source gun, nor machining equipment for that matter.

You could find everything you need in a big box hardware store and a weekend’s worth of effort. What would make it open source is widely distributed instructions. It could very easily be more than one use only, but it would certainly not be legal. So how is developing and distributing files and instructions for a 3D printed gun any more legal?

Granted there are plenty of legitimately manufactured firearms that have found their way to the black market, but 3D printing them keeps them completely off the grid from the get-go, do we really need/want that?