3d modeling a femur from scans

hi corofloaters, i need to model a femur from mri scans to do some fea and vibration tests on for an implant job. i have a whole series of images like the one below that are my reference for creating the model. my question is, what is a good modeling technique or software for doing this ?

i have tiffs of the files and they have an alpha channel so i’m guessing just convert them to paths and do a whole series of offset planes in solidworks followed by a loft or sweep. i’m kind of thinking of displacement maps in rhino too. the bone structure is complex with lots of amorphous cavities so i need a technique with good fidelity, if anybody knows of any for a job like this the advice or suggestions would be kindly appreciated. 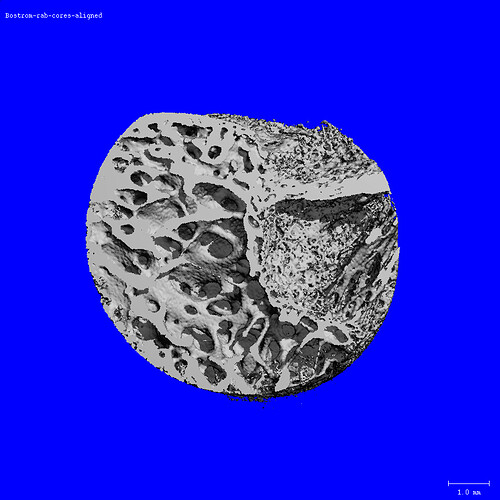 In my opinion. This is not a job for a surface modeler. If you really want to do FEA down to the bone structure level, you really would have to take a different approach.

Organic modeling internal structures such as you have in your image are not going to be obtained without months of modeling. Even then it would be the wrong tool for the job.

No doubt there are specific medical programs that can handle this kind of data. Converting it to something that a FEA program could use would be the goal. What FEA program do you intend to use??

Voxels would be the approach if I had to build it from scratch. Get the raw data from the MRI or other scan, build a voxel space definition. Build a mesh from that. Run the FEA on the mesh. The program that I would try it with would be Scan & Solve, which uses voxel reps for the FEA instead of surfaces and can handle meshes.

Here’s a start, check out 3D Slicer. That can take the DICOM data and extrapolate a 3D model.

There are tools that convert, clean, and patch surface 3D Scan data.

If you can get access to point data to generate a mesh like was mentioned, you can use something to rebuild that mesh if needed.

But this is pretty heavy, trying to do it manually will be insane, inaccurate, and most likely would generate a model so heavy you won’t have enough computing power to even handle it.

Oh my…have you verified that FEA on this kind of thing has been done? My employer tried to get FEA analysis on something not unlike that (well in a manner of speaking, significantly simpler actually)and it crushed their system and they threw up their hands. I would think analysis would have to be based on some sort of guesstimates about density.

It has been over a decade since I worked on any MR project, but iirc, the dicom data should have bone density in it. You should be able use it as an average like JimC5 wrote.

Unless of course you are trying to design custom hip implants based on patient-specific bone structure. If that is the case, you would probably be best to develop your own proprietary software for the job. Other than that, cadjunkie is correct that dicom data can be converted to stl.