Pretty pictures are not design. Software has allowed us to make a cheese slicer or a lawn mower look like a gleaming pearl with diamond accents. These petty pictures allow us to quickly scan over a student or potential employee’s design work but I think a new type of portfolio is required for the 21st century – something that captures not just the sights (with the dramatic perspectives and overstated bling) but the sounds, feel, and aura (in the sense of material culture). I can show ideation that progresses from a box to an elegant toaster. Than make the toaster look like it went to the best beauty parlor in Palm Springs. But is it a good design? Is it appealing in its real “I need to make toast at 6 am” context?

Video seems too clunky; no potential employee wants to wade through 6 minute videos, which have the potential to tell more of the design story. I have taught industrial design at the Pennsylvania College of Technology for seven years and I struggle with this question. It seems that holograms and haptics are an approach, but they are not ready. Live demonstrations of models is geographically constraining. I lean towards telling the design story with annotated pictures and audio accompaniment. Any ideas?

One time, I took a product of mine to an interview. If I was looking to hire someone, I’d like to actually touch and feel what they worked on. If it’s great, awesome. If it’s so-so, I would think it would be very illuminating of their character how they talk about it.

I love the idea of using a tablet with slide viewer that was non-linear… you could show lots of projects and then dive in on aspects the interviewer finds interesting. You could even throw it up on a projector if the screen size was a too small

Printing is always a time consuming and sometimes expensive process, and that would get around it - though I do like seeing design work that’s nicely laid out in a book (and large!)

Video seems too clunky; no potential employee wants to wade through 6 minute videos, which have the potential to tell more of the design story.

Portfolio in one hand, slide carousel in the other; Old School Hi Tech 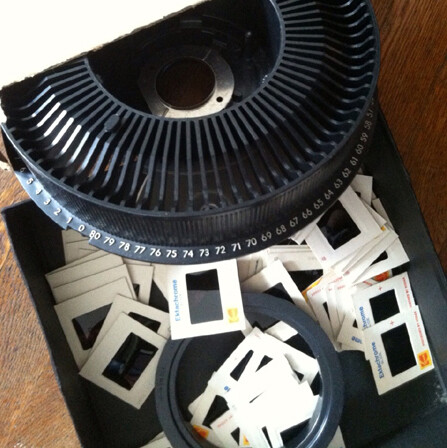 Video seems too clunky; no potential employee wants to wade through 6 minute videos, which have the potential to tell more of the design story.

Portfolio in one hand, slide carousel in the other; Old School Hi Tech

I like seeing action shots of process. If you led a team, let me see it. In some ways I feel this is just as important as sketches and other process. I want to know how you think. I care more about that then you final out put.

I used my sketchbook to land one job. It’s the best think in my opinion.

I’ll go ahead and say it: despite the importance we designers place on them, portfolios are not accurate reflections of the kind of work a job candidate can do nor the kind of worker/designer he or she is. Far from it. The design field–from the industry to the schools–places so much emphasis on the visual that the “standard” is, unfortunately, what looks good. Don Norman has written a lot about his frustration with competitions that award designs that don’t even have the product within the context in which the design is supposed to be used. Many, if not most, studios will filter candidates based solely on pretty renders. Design blogs, product catalogs, and online store websites endlessly feature products against a clean, white background as if anyone’s home is that clean. But that’s just the reality, unfortunately.

This is an easy check: ANY studio would be more than happy to hire a Jasper Morrison, a Don Norman, a Naoto Fukasawa, etc., right? Not for a design position, but for probably ANY (creative) position. I’d wager that none of them are great renderers, modelers, or even sketchers in their company/network. Probably not by a long shot. Nonetheless, they’d be great designers and contribute tremendously to the studio. If any of them were not as famous as they are but instead were young designers looking for a job at a studio, I’d also wager they’d be turned down by most of them. But they have creative vision and probably a large amount of good business sense and managerial talent. And those things, although often the most important traits, are also the most difficult to communicate, especially when as an applicant, the dynamic of the relationship is already putting you at a submissive disadvantage.

In my mind, the ideal 21st century “portfolio” will consist of 3 parts: 1. A personal referral/recommendation, 2. an initial meeting/interview, and 3. a 3-month trial period. Every item will be necessary to identify the right candidate. I don’t really need to go into the benefits of such a setup, but my point is that any studio expecting to get the “right” candidate through only the portfolio will not likely find one, and any designer hoping to get the “right” job with a portfolio will likely be disappointed.

I’d really like to see some projects where everything went wrong, and yet they still managed to come out with something half-decent. Some of the projects I’m most proud of were with tricky clients, organizational politics, etc. but they’re not “portfolio material”, and the one’s I’ve put in anyway are often skipped over in reviews.

I’d really like to see some projects where everything went wrong, and yet they still managed to come out with something half-decent. Some of the projects I’m most proud of were with tricky clients, organizational politics, etc. but they’re not “portfolio material”, and the one’s I’ve put in anyway are often skipped over in reviews.

If I were in a position to hire, I’d second this thought. A lot of job descriptions actually include “proven track record of market success” for mid- to senior-level designers. I think that’s a bit unfair, unrealistic, and a bit narrow-minded. A friend of mine who had been at Nike’s Innovation Kitchen several years ago once told me that only about one idea makes it to market once every 10 years or so. If you’re judging a portfolio on market success, I think you’re doing yourself a disservice.

Thanks for the helpful comments.

The real product is the best “portfolio” representation – but it is hard to communicate that virtually. Interestingly, the longest lived product I designed (meaning it is still being sold) is an ugly thing I designed 20 years ago for a residential application for natural gas. It works well and by that merit it has held up over time. I have been a commercial designer since the early 1980s and it is interesting to see the life cycles of my designs and I only mention the ugly gas product because it would not grab anyone’s attention in a portfolio yet it is a successful and enduring design.