It’s amazing how it looks like some boutique cottage manufacturer rather than a major auto make.

To be fair, the price of this probably won’t even pay for a semester at most private art schools

I love it, curvaceous without feeling “bubbly” or “feminine”. Miata owners may finally be able to drive in peace without any gay jokes being made!

@2200 lbs I hope they give an option with something close to 180-200hp. Rumor mill says there will be a turbo engine + an entry level motor.

I also love that it looks like they kept the wheel and lugnut size the same. Miata racers everywhere are thanking god they can re-use their wheels!

I think 5 lug wheels, although trendy, are heavier for no reason on a road car.

Doesn’t do much for me. Looks like a combo of the Subaru BRZ, the Honda S-2000 and maybe a bit of Miata.

Original one at least had a unique take on the classic British Sportscar. I would have like to see them take it back to that direction, without going retro, but maybe looking at an E-type configuration with long nose, short overhangs, etc.

Hmmm, I was hoping for something more ‘fun’. When I say that, I mostly mean the styling. Plenty of squinty eyed sports car on the road already, the Miata has always been a cheerful car to me. Oh well, gotta move with the times I guess…

I need to see it in person. Overall, based on pics, it looks like a much more memorable design. I see echoes of the BRZ and the S2000, but I think both of those are well done cars as well, so I don’t see a problem. As Paul Rand said, “don’t try to be original, just try to be good”. There are lots of squinty eyed cars but most of those are ugly and this one looks good.

Richard, I agree with you that I would have gone back to the original source, the Gen 1 Miata, which is the most iconic of them, to see what DNA could be evolved. There was a lot of vintage Lotus in that car that really worked.

i think this design is very trendy, and well done, it might date quickly though. I’m looking forward to checking it our in person though.

Remember the ?Mazda Ibuki concept? Below plus some other things that do it for me. 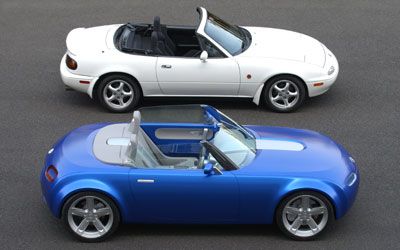 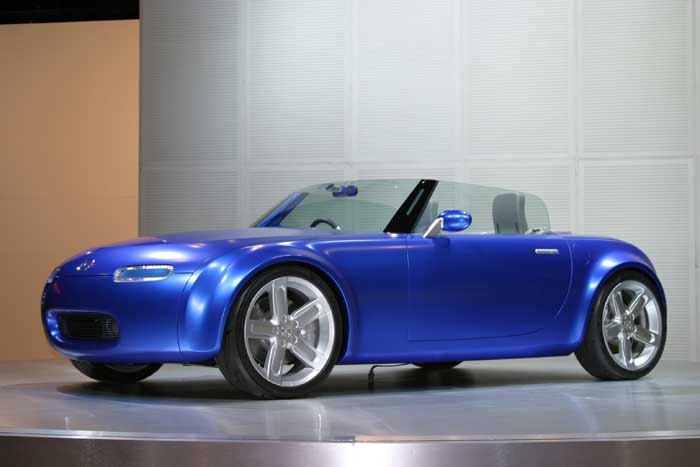 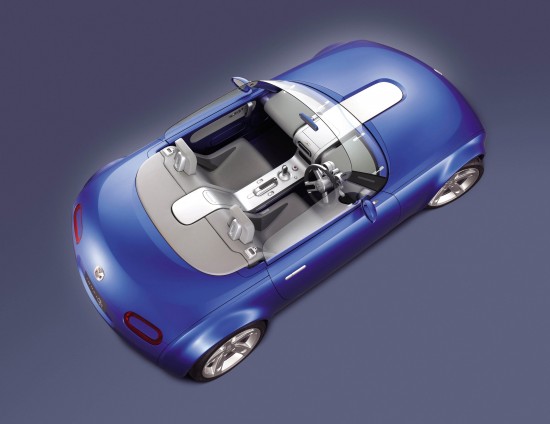 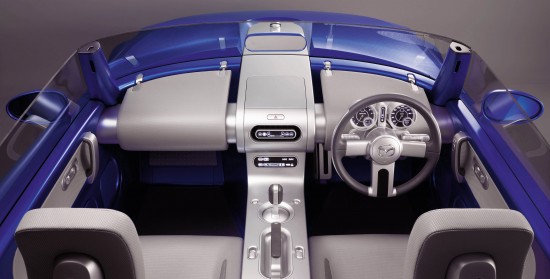 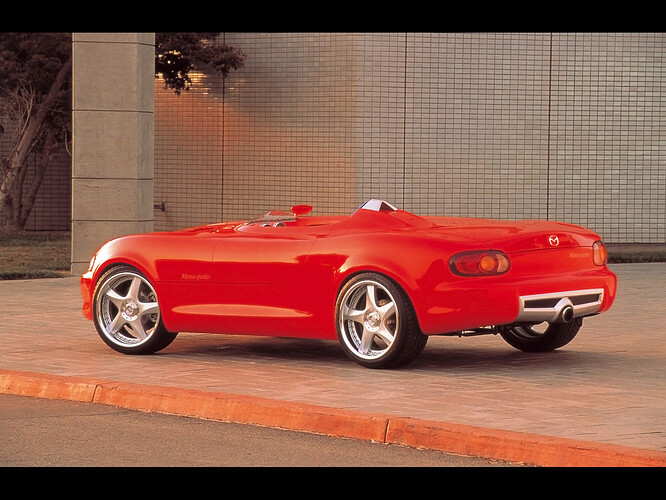 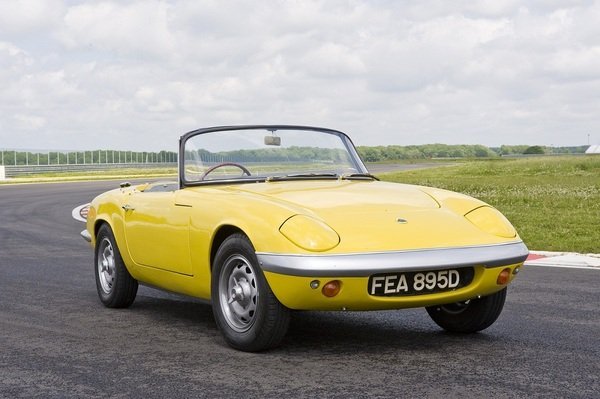 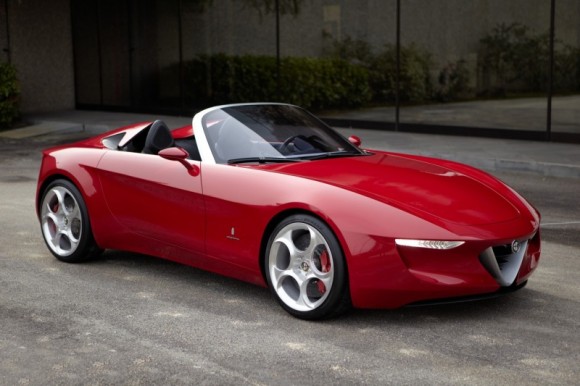 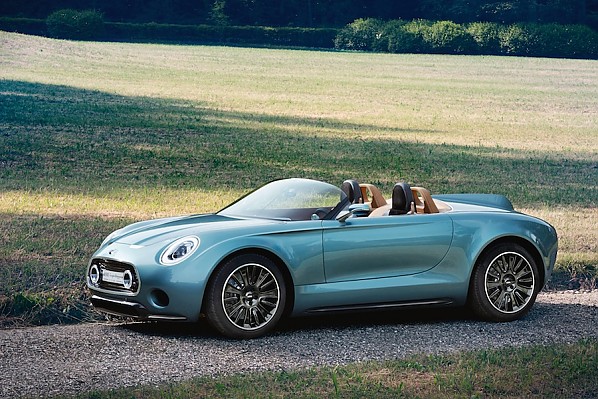 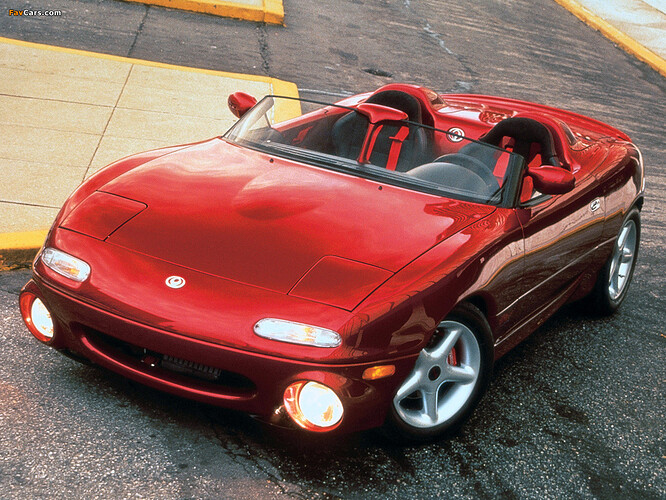 Some moons ago I had an Alfa Spider when my dad ordered his Mx-5 (that he still has).
So we both awaited this new generation with taut anticipation.

While I like and do understand what Mazda did to this I am still hoping for an Alfa version that might come very close to the Duettotanta concept pictured above. Which has become more imaginable today as some of the straying from the Mx-5 iconic egg shapes might be based in the need to do both versions well.

If Sergio really f*d up on this collab I’ll happily take the Mazda and tweak it to my tastes as everyone else
does. The squinty eyes and the logo are my only concerns. Everything else looks great and great value, especially:

When I look at old Miatas I don’t see a successful nod toward sports car heritage (in terms of styling), I see a poor imitation of it. Take an approximation of a 1960s British sports car and drown it in vanilla and as much cheapo ABS as you can muster.

Not knocking the performance or fun factor of any generation of Miata, but to me, smallness/blobbiness does not equate with iconic styling.

If you owned one, you would understand I think. It’s like an MG that doesn’t break down. The plastic is there for a reason. The interior was actually quite nice for 1989.

I see a lot of later TVR in this Miata, mho. That’s why I said it has a boutique cottage feel to it.

When I look at old Miatas I don’t see a successful nod toward sports car heritage (in terms of styling), I see a poor imitation of it. Take an approximation of a 1960s British sports car and drown it in vanilla and as much cheapo ABS as you can muster.

Not knocking the performance or fun factor of any generation of Miata, but to me, smallness/blobbiness does not equate with iconic styling.

I’d disagree, “sports car heritage” is very vague, if you take a look at the Elan posted earlier:

That was very much the design inspiration. Very simple surfacing, the pop up headlights, cute snout, super simple interior. I wouldn’t describe any part of it as blobby.

It wasn’t meant to be a Jaguar E type of Ferrari. It was meant to replicate the simple, lightweight formula and make it accessible and relevant. No one designs something to be iconic, becoming an icon is something you earn - and the Miata did just that.

If the iPod was an unsuccessful piece of sh*t we wouldn’t call it an icon, we’d just refer to it as “that old jukebox Apple tried making in the 2000’s”.

Like many cars on the street today, I think it would be very difficult to identify this as a Mazda, let alone the Miata if you removed the badges.

Mazda’s had a long time to think about the next generation.
It’s stunning how it would seem that some uncomplicated sports cars maker instead of a real auto make.

What’s up with Duran Duran at the end of the presentation? #fail

What’s up with Duran Duran at the end of the presentation? #fail

U2 was already booked…

im not crazy for it but as Yo said, need to see it in person. I was really anxious to see this car.
the rear end lights look like and angry robot and also a lesser version of the new Jag F-type rear end design to me.

Also, Why does the miata always sit on an island as far as design language at mazda? this car looks nothing like the other cars in the line currently, maybe a tiny bit in the front grille opening but thats it… i think the other cars in the line currently have much better language and more unique. i think the 3 and 6 sedan are better designed than this for what they are.

im sure performance will be amazing as always from the miata. but also agree with what was said previously if you took the badges off it wouldn’t resonate as Mazda to me. this type of car has the possibility to look STUNNING as many of the other cars posted in this thread, this does not look stunning to me, nor does it really grab me in a positive or negative way, but same could be said of past miata designs in my opinion.

Doesn’t feel very Mazda-ey. Mazda has lots of connected contours, this is very BR-Z disjointed and conflicting surfacing. They could have made it more masculine without being too generic or crease happy, IMO.

The overall stance is interesting.

I find it hard to complain about the surfacing - in this day and age it’s extremely restrained when this is what the rest of the Japanese are going for: 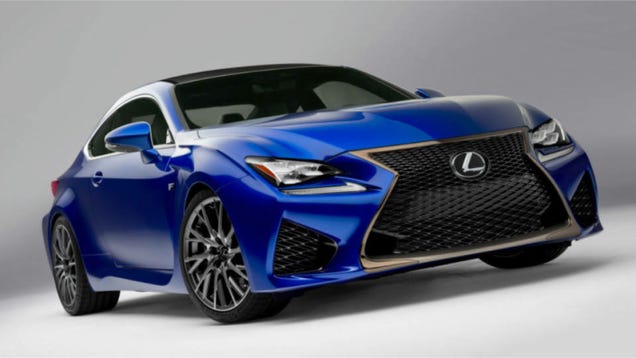