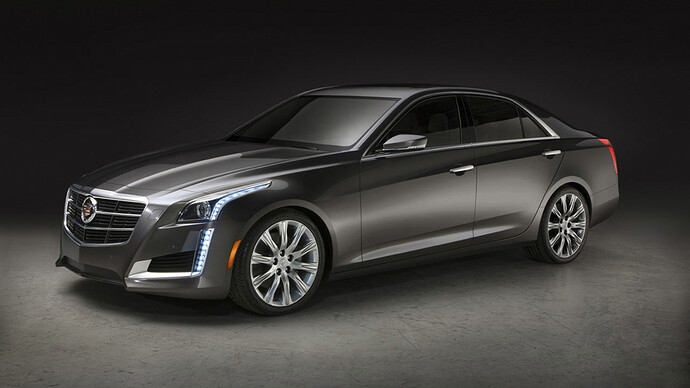 Check it out! It feels to me like the details just became far more sophisticated… along the same lines as the Chrysler 300 refresh in 2011. 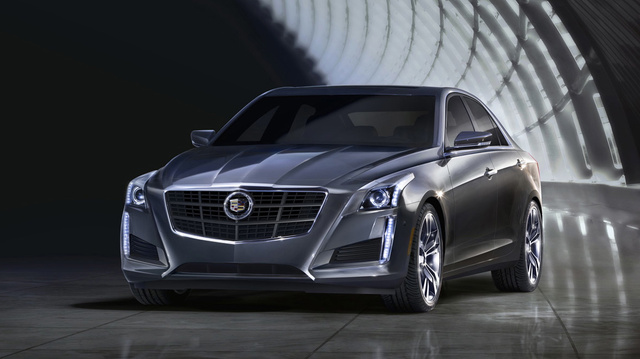 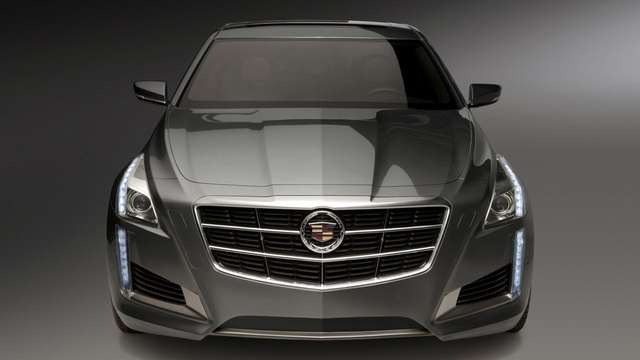 I do feel like the front-end is creeping on Mercedes (C and E-class) territory, but at the same time, it’s a very pleasing evolution from the last generation…

More pics, an article and comments here: 2014 Cadillac CTS: This Is It

But what do you think? It just needs some side-vents, right?

Also, video of it driving around for a while followed by slow still-shots and some great detail shots (around 2:30). I especially like the layers in the emblems and the Cadillac graphics on the brake calipers. The rims on this version are very cool as well.
2014 Cadillac CTS Driving Footage - YouTube!

Loving it, though I disagree with the 300 refresh comment. To me they took that car 5 steps too bland and stole the headlights from the A8… but I digress.

I’m pleased to see Cadillac embracing the Ciel concept from a few years back. Loved the sweeping lines on that car, and I love the similar headlight/front quarter treatment here. I like that it’s still a bit aggressive, but they seem to be refining that aggression.

However, I did read the other day that the average age of a Cadillac owner is around 64(!) and a 5 series was something like 49… I imagine they have a long way to go to average that age down…

I saw one on the road a few weeks ago and was really taken by surprise. It was skinned and had a cover over the front, but it was obviously a Cadillac. After I saw the press images, I was surprised at how ‘soft’ it appeared in real life (might have been the wrap on it though). The two side creases converged nicely into the rear without being overly present. It definitely grew up in size though.

I think the biggest thing that pleases me about this is that the current gen coupe/wagon will come down in price. I know what my next car is going to be (wife already pre-approved a V wagon if I can find one)

I like it. I do agree that it feels a little more mature in a similar way to the 300 refresh.

Love it: the LED lights are actually looking different. It’s about time someone really take advantage of this technology. The kept the nice interior.

Hate it: The hood looks fussy. Why put that bulge in the centre of it? I prefer the old one here.

I like it a lot. I wish the tail was a little more bold though. I could see the tail light bending back with that crease line.

Works well in photos, look forward to checking it out in person. Certainly a lot of nice details like the wordmark in the tail lamps.

Very nice. The V version will put this latest step of their VBL into full context - can’t wait to see it.

Then again, while less evolved I think the current CTSv rocks as well. A nearby chiro’ has a nice 2012 he’s been modding - when I happen upon him in Gretchen we play a little dance to see what the latest mods have done for him. That thing is sweet.

It’s really great to see the American car companies sort of get their shit together lately (last few years). IMHO Dodge and Lincoln are leading the aesthetic charge.

You don’t think Ford is leading? In terms of consistency, Fusion, Focus, Fiesta, and Escape all are nice and have a solid design language.

The Dodge and Jeep both have individually really noce products, the entire line isn’t as solid IMO. Cadillac and Buick have been making big moves. Lincoln not sure about yet. I need to see that new ride in person. The comercials are nice.

But yes, agree, it is nice to see the Americans make some moves. Would like to see some of the Japanese brands get their mojo back. They seem a little off their game right now. Personally, if I was going to go non-euro, I’d go Kia or Hyundai… Curious to see if those companies can pull off a near lux brand like Lexus/Infinity/Acura

But yes, agree, it is nice to see the Americans make some moves. Would like to see some of the Japanese brands get their mojo back. They seem a little off their game right now. Personally, if I was going to go non-euro, I’d go Kia or Hyundai… Curious to see if those companies can pull off a near lux brand like Lexus/Infinity/Acura

I think Ford also seems to be improving their quality, but I’m not a fan of the new design language; just a personal preference. The Mustang is gorgeous and I’m also a fan of that ridiculous truck with the massive FORD logotype in the grille.

Totally agree re: Japanese brands. Some of the new Toyotas have literally baffled me. And that Infiniti QX65 is just…astonishingly grotesque.

Again in agreement re: Kia/Hyundai. They’ve really surprised me. I remember the early days when both of those brands were punch lines. The newest Kias are especially pretty, IMHO.

I had a great-uncle who was on the original design teams for the Mustang and the Edsel and a few others…I’ve been meaning to root around for some of his sketches.

Ford: I think they are repositioning to a lower volume brand in NA. Right now, I think they are selling cars designed for Europe. It’s certainly differentiating them. We’ll see how big the market for Merkurs is in 2013.

Lincoln: I’m worried about them too. The new MKS was super popular at the car show. Easily the longest lines to sit in. On the other hand, the dash was crooked and the window trim was misaligned on the C pillar ON TWO CARS!!! Ouch.

Japanese: I still love '90’s Acura, Lexus and Infinitis. Now they are all rather disgusting and vanilla at the same time. 90% of the car (the middle bit) is completely anonymous. The fronts look like the brief was “be different”. Ouch.

Kia/Hyundai: Huge success across the board. They do have some weak models, but they seem to drop or redesign fast enough that it doesn’t matter. The big Hyundais are really nice today. Curious how the drive compares to luxury cars, but not curious enough to actually try.

I had a great-uncle who was on the original design teams for the Mustang and the Edsel and a few others…I’ve been meaning to root around for some of his sketches.

Japanese: I still love '90’s Acura, Lexus and Infinitis. Now they are all rather disgusting and vanilla at the same time. 90% of the car (the middle bit) is completely anonymous. The fronts look like the brief was “be different”. Ouch..

Seriously, what ever happened to the Acura Legend, or the original TL. All the new stuff looks like a generic car with some kind of weird predator or transformer mask stuck on the front end. And the Infinities went from tight and angular to melty and drippy.

Thanks for the interest; I only discovered this design genealogy all-too-recently.

This is the only sketch someone took the trouble to put on the internet, get ready for quite a doozy: 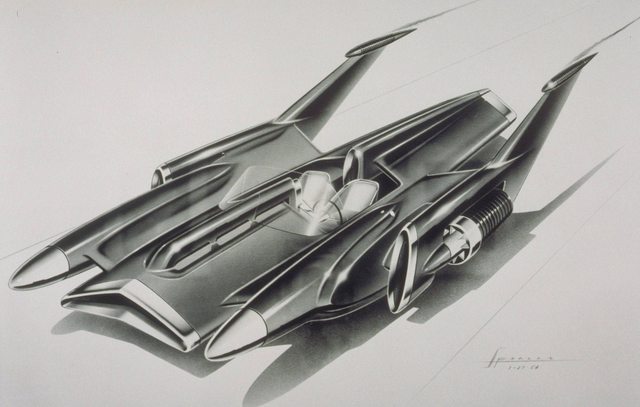 This is his Ford Volcano concept. He was also the supervisor of the clay model shop. 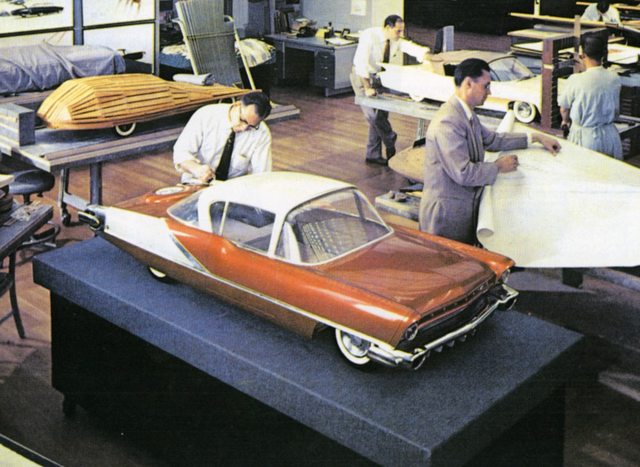 Please feel free to bombard us in there

Ford: I think they are repositioning to a lower volume brand in NA. Right now, I think they are selling cars designed for Europe. It’s certainly differentiating them. We’ll see how big the market for Merkurs is in 2013.

Ford is very public about its global design strategy, but they’re most definitely not going low volume… Based on sales to date this year and a quick look at last year’s numbers, they’ll sell almost one million F-series trucks, 1/4 million Escapes, and at least that many Fusions in the United States alone. http://blogs.cars.com/kickingtires/2013/04/top-10-best-selling-cars-march-2013.html

Whoops. Off topic. Just thought you might want to know.

Relevant:
I’m glad the V version was brought up… I almost forgot, and then saw one in the parking lot this morning. It has a very different look to it than the standard sedan:

I wonder how this will translate to the new edition…

And the coupe… oh man I can’t wait to see what that looks like though I may be waiting another year… Here’s the outgoing 2-door:

domestics: I think GM is the style leader and it’s showing in their market share. They’ve brought Cadillac back to the top by sticking with the V performance versions as the ‘aspirational’ models. More importantly, they are the best positioned in the Far East with their entrenched Buick brand following.

Japanese: I think Lexus has gone off the overly-bejeweled cliff (while Toyota continues to follow Hyundai), Acura is once again trying to figure themselves out on Honda money (and will no doubt fail once again) and Infiniti seems to continue their quiet, subtle path of making interesting cars and questionable SUVs (maybe Nissan didn’t inform Renault that they also own Infiniti?).

Hyundai: simply kicking a*s on the Japanese right now, they are slowly burying Toyota, have usurped Nissan and are seriously challenging Honda’s reputation for quality…meanwhile they’ve positioned Kia to wipe up on the low end. South Korea’s extensive STEM educational programs are creating fast-paths to success for Hyundai, Samsung, LG, etc. We are in trouble.

Euro brands: I think Audi leads the pack but I still like my BMWs

They aren’t low-volume (and never will be). However, they’ve seriously down-sized their production capacity world wide to be profitable at 1/2 the volume of a decade ago.