If you like vintage motorcycles, this cross-country race offers the opportunity to see 70, pre-1930 motorcycles of all makes in their natural habitat, the open road. And there won’t be a hubless wheel among them.

Not exactly the clandestine, WFO, “Cannon Ball” cross county races of the 70s and 80s, this “race” is organized into 16 stages of varying length ranging from 93 to 320 miles per day.

Here’s the list of cities on the route. Starting in Newburgh, NY yesterday, and ending in San Francisco on 23 September. A mid-race Rest Day is scheduled for Friday, 24 September, in Sturgis, North Dakota. The route includes less than 100 miles of Interstate travel.

My friend Darryl Richmond is piloting his 1928 BMW R52 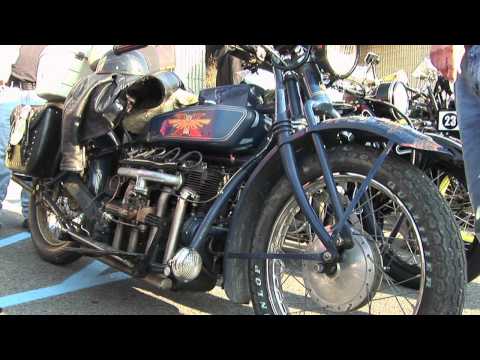 I assume he wants to refer to the motorcycle chase in “The Great Escape” or the benefits of coffee enema.

I don’t get the coffee enema reference…

I read thishttp://dangerousminds.net/comments/steve_mcqueens_1964_driving_license that said Steve McQueen used to travel around the US just riding his motorcycle, and I realized that if he was still alive he’d be in his eighties, and probably would ride in that race if he could’ve.

Sangy, McQueen wasn’t much of fan of antique motorcycles. He was more of a ball-buster, cross country rider, to say the least.

I suspect that the glacial average of 45 miles per hour would have been enough to draw him to this competition.