Have you seen this thing?

It seems like a bad time to release a 500hp, high priced sedan… from Porsche. Why can’t Porsche be left to make 911’s, Boxsters and Caymans? Do companies have to show annual sales growth even if it means extending outside of their brand boundaries? You know I’m talking about you Porsche Cayenne.

It seems like the brand would be better to build the best 911s and Boxsters/Cayans it can, and sell as many as people want and leave the expansion for other endeavors outside the brand?

Hm. Must be the first time I remember, that I do not fully agree with yo(u):

Why do you think the Panamera pushes the boundaries of the Porsche Brand Identity too much? I donÂ´t think, that the concept of “Brand” focused product developement should be that static. 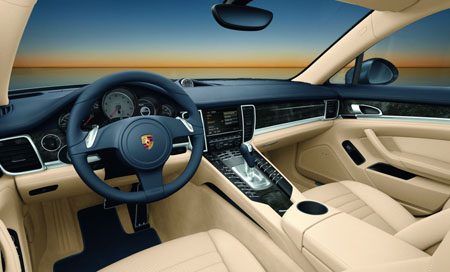 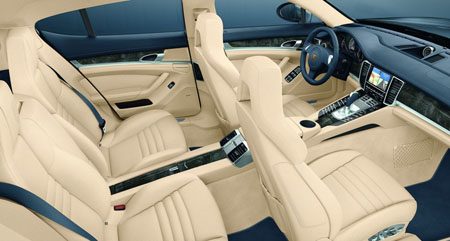 I am curious to see the Panamera in person. The details seem to be all very well executed, but the proportions are questionable.

The timing was ill fated, though. Hope they`ll live through it.

As a recovering Porsche-phile, I totally agree with Yo. Also, looking at the global economy and the recent trend in rising oil prices, it looks like a very stupid car indeed.

On the other hand…I said the Cayenne was going to be a long term failure and I’ve been proven wrong. I don’t know how, but Porsche has kept its image, even improved it, in spite of taking a p on their heritage (they haven’t run a top level Le Mans team since '98). Oddly enough, but worthy of note, more Cayennes are sold in Europe than the US. Also, seeing as they’ve been playing with this car for at least 10 years, perhaps they know something we don’t.

I think a more interesting opportunity is at the other end. Why can’t someone make a fun little RWD car for $15k-16US? Porsche started as a Beetle kit car company (more or less). I also think of the Mustang and Miata when I think of this idea. All three of these products have moved up market, getting heavier and too expensive. Why can’t Kia make something like this and the Soul?

All business plans show growth, often at the expense of the brand. I think the Porsche brand is one of the biggest examples of this. It is avery focused brand. I would not say static, but very tight. I think that is the beauty of it. It’s not my company, but I just don’t think 4 door vehicles fit the image of the brand and the Cayenne and Panamera take the brands cool factor down for me. Both are not bad designs (not great, but not bad), but even if they were fantastic, they still wouldn’t be Porsches.

On the flip side I think BMW has done a very good job. They expanded into SUVs with X5, an SUV that is in my view for sure a BMW. The 1 series fits nicely. The filled in the gaps with the 6 series. From a design standpoint, I do not like the x6, and it is a stretch, but it kind of makes sense…

That aside, the interior of the Panamera looks very nice… Jaguar should take note!

what is the question it answers?
It only makes sence if you look at how they’ve been using Porsche Design to spread the brand name across any and every consumer product category.
Ferrari has been a bit more focused in what consumer products they choose to brand (not necessarily wiser, but focused)

I find the car absolutely ugly.

what is the question it answers?
It only makes sence if you look at how they’ve been using Porsche Design to spread the brand name across any and every consumer product category.
Ferrari has been a bit more focused in what consumer products they choose to brand (not necessarily wiser, but focused)

Porsche Marketing Head: “Quick! We need a car to compete with the Quattroporte from Maserati! They’re selling those things by the boat-load”
Design Guys: “But, that doesn’t compete with any of our cars.”
PMH: “Exactly! We need one to compete with it! Hurry!”
DG: “But its going to be a bad, ugly idea”
PMH: “I don’t care!”

For reference, the Aston Lagonda concept and Rapide.

From a design standpoint the panamera seems nice enough from all the views except the back. The tail is really offensive.

I don’t think it had to be ugly though and I doubt the designers thought it would be, the end result was ugly, I’ll agree there. The profile of this car has always been awfully awkward to me, half sedan, half hatch, half wagon, pick one and roll with it! The quattroporte comes as a sedan, fastback wagon, or wagon all of them look amazing.

This just feels so heavy and unrefined. Here’s quick liquify of how I think that backend could have been helped. 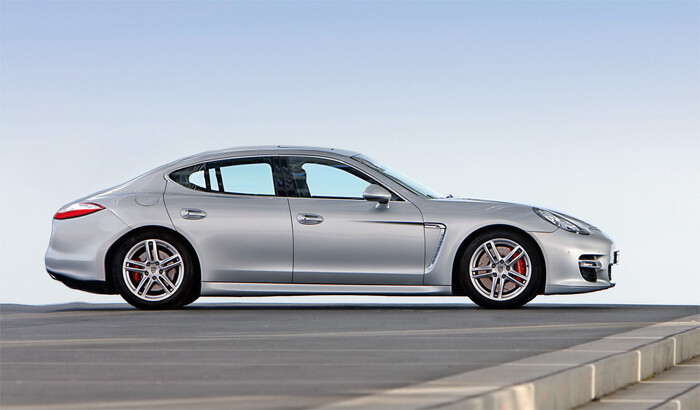 From a business perspective, can any car company really afford to just do their one thing and do it really well? I can’t think of many companies in any categories that do. Morgan comes to mind, Ferrari does, I might have said Lamborghini, but even they tested out the water with that 4 door concept a few months ago. Rolls just introduced and “entry level” model.

I have never understood the attraction of Exoticar Quattro Portes. I guess if the cash is burning a hole in your pocket, and you have to do something with it.

Just give me a $32K Crown Vic, with a couple $K in police components.

Porsche suddenly seems to think they’re in the auto business, not the sportscar business.

To Yo’s point, BMW was successful with SUV’s because they were always positioned as a general auto company. Cadillac was a bit of a stretch but it somehow worked because the Escalade (always black & tinted) had a “diplomat” feel to it.

Anyway Porsche, that thing is hideous and I think you’re stupid.

Aston Martin’s extension to the 4 door zone makes a lot more sense to me for some reason. I’ll have to put more thought to it, but the Aston version feels “right” and this feels “wrong”

Maybe not the best example because of their situation, but I think Volvo has also done a great job of line extensions… where as Saab could be a one model company, 900 (9-3) coupe, convertible, and 5 door. Done.

Ferrari has been a bit more focused in what consumer products they choose to brand (not necessarily wiser, but focused)

Really? You can get a Ferrari laptop, alarm clock, shoes (a while ago made by Fila, though now I think there are Puma ones), cell phones, etc. lots of junk made red and stuck a logo on it.

Porsche is much more disciplined. They do have other consumer products, but most match or exceed the car’s design/engineering with Porsche watches, Knives, radios and the like. Sure not a badge job.

Lambo is almost as bad with that.

That being said, I don’t think the 4 door Porsche necessarily fits the brand perfect, but already having an SUV I think it works. I do agree though that a nice small 2 seater (ie. Pontiac Solstice/Miata) in Porsche drag for under $30KUSD would fly out the shelves…

As or the design of the Panamera, for me it’s a solid “meh”.

Though not sure exactly what your angle is Mr.-914, as the 914 (your namesake) was a rebadged VW and surely not a Porsche in my books…

The Mazda RX8; not a true four door, but definitely more agreeable; perhaps because there are no aft door handles?

I do agree though that a nice small 2 seater (ie. Pontiac Solstice/Miata) in Porsche drag for under $30KUSD would fly out the shelves…

I agree, but they blew that one too; the Boxer RS60 would have been more appealing had it been packaged in a smaller Box(er).

Aston has a history of four doors:

Though not sure exactly what your angle is Mr.-914, as the 914 (your namesake) was a rebadged VW and surely not a Porsche in my books…

Richard: ouch. At least the 914 was designed and engineered by the Porsche family (Butzi on design, Ferdinand Piech on chassis engineering). That’s more than any Porsche since then.

356 I really like. Style, stiff chassis and comfortable. Hard to believe the thing ever raced. It’s feels like a reinforced Bug.

944s are seriously fast. From what I remember of my dad’s new one in '88, they were well built. Pain to work on though.

914 I liked. Funky '70’s looks, stiff chassis. It was fun. If I could afford a restored 914/6, I would have bought that in place of the Miata. Horrible build quality though, as it was made by Karmann to a price point.

I test drove a '98 Boxster before getting the Miata. I think the Miata is 90% of what a Boxster is, it’s just not as fast. I was surprised at the amount of flex in the Boxster chassis too. Also, it’s seriously bloated. Huge expensive tyres, brakes, etc. Pain to work on. The entry price for a used one is almost as low as a good as a newer Miata, but the maintenance costs are incredible. I could replace half my Miata for the price of a Boxster radiator. Insane.

From a design stand point, I stand by what I’ve said. They got lazy. They’ve been, more-or-less, resting on their name for a decade now. As much as I don’t like Ferrari, Lambo and Aston, they’ve all moved much farther in terms of design, quality and engineering in the same period. I think it’s a shame when I think of the really innovative things Porsche used to do.

I’ve never driven any of those except for a brief ride in my dads 944 (before he sold it just prior to me getting my first driver’s license, coincidence, i think not), but have drove some newer (as well as late 60’s 911/12s and I don’t think much compares…

anyhow, not to get too OT, but to me Porsche should be THE company to get back to those more minimal driver’s cars. Just looking at a newer 911/Cayman/Boxer compared to a late 60’s version makes me feel bloated…


but that’s just me. you all know i’m a sucker for the vintage…