If you have the means, I highly recommend picking one up.

Still not as sexy as the Alfa 8C Spyder.

I’m watching “Ultimate Factories: Ferrari” right now off the Nat-Geo channel. They’re showing the complete manufacturing and construction of the 599. Tivo it if you can!!!

over done, too many dimples, swoops and such…the hood scoop is tradional on a cali spyder however.

I’m watching “Ultimate Factories: Ferrari” right now off the Nat-Geo channel. They’re showing the complete manufacturing and construction of the 599.

over done, too many dimples, swoops and such

See… here’s where I give Ferrari a pass. I’ve been such a fan for many many years, way before I had any notion of car design, that I don’t really care if something is over done. I wasn’t a fan of the 612 Scag at first but it soon grew on me. Plus, that Top Gear episode where they supposedly raced the Swiss public transportation system helped.

I feel about Ferrari the same way I feel about a favorite band or singer. A new album comes out, I buy it and listen all the way through as many times as it takes to enjoy it. Call me brand loyal I guess, although I’m certainly not that way with many things.

I don’t like the California either. Here’s a couple things that bug me:

-Exhaust. It looks like they copied the Lexus IS-F with the stacked tips. Why…on so many levels? It’s not particularly beautiful and serves no engineering purpose.

-Front end. It’s actually nice, but it also looks like the Maseratti Coupe…except that was matched with an equally classy design from the firewall back.

-Funky side swoop. There is just something out of proportion here. Maybe it would look better in person.

To be honest, I think Ferraris have dropped a tad. The last Ferrari that I thought was seriously hot was the 360 Modena.

Cars like this almost always look better in person where you can appreciate their fine sense of proportion.

That said, I’m not a fan of the way the forms come together on the body side. I wouldn’t say that it was over-done, rather that it wasn’t done enough.

I see the position they are going for.

On one end of the market you have pure beauty, represented by Aston Martin, The Alpha 8C, and even the new Maserati (though not as traditional of a beauty, it is stunning).

On the other end of the market you have pure aggression, represented by any of the new Lambos, Paganini, and any of the other Boy racer types.

I think they are going for the middle ground… I think that is a hard zone to pul of though, and here it comes out a bit muddy.

I think Bugati set up in a nicer spot, beautiful, assertive, and yet somehow traditional and striking all at the same time. 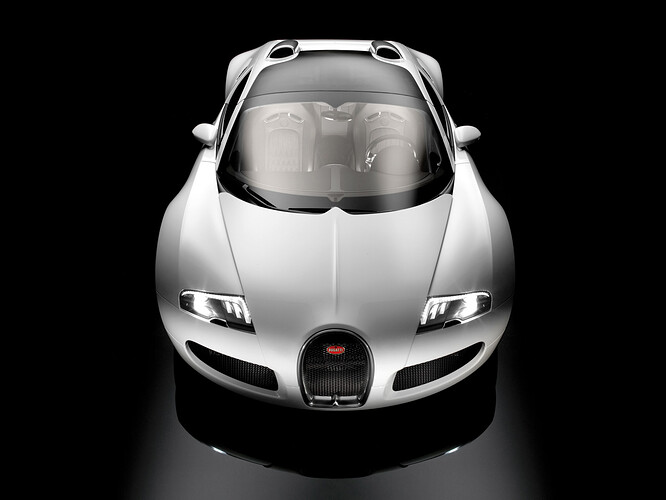 To be honest, I think Ferraris have dropped a tad. The last Ferrari that I thought was seriously hot was the 360 Modena.

The F430 does nothing for you?

I keep thinking the F430 is a Modena. Thankfully, they only evolved that design.

I saw the Scuderia by the beach last weekend

minus the day glo orange, I love the matte black on the f430 body

I like the new cali, I love topless modles, just more fun when not in use. But for the track I must have a hard top, for more fun when in use

ps to thoughs in Chicago, there was and probelly still is a Bugatti at gold coast Bentley on State. Go take a peak.