I just to update every one with my progress since leaving uni:

Back in January of this year I replied to a advertisement for a junior design position with First Brands, after the making contact I managed to get a interview at Hi-Tec design HQ.

However the job was put on hold due to recriutment complications, and luckily managed to land a temporary job with Fred Perry as a Technical product developer, working with the AW07 & SS08 footwear lines. I was working there for over 5 months learing the in’s and out’s of the sealing process and technical aspects of the footwear buisness.


Up until nowI was working as a freelance designer developing new ranges of footwear for Firetrap and Bench Clothing, designing comercial footwear ranges with the advice and help from head buyers.

I really cant explain how much effort and time has gone in to finding and nailing down this job.

I just want to scream it out to the whole world “I HAVE A JOB” because it is maybe the lowest time i have had in my life, not knowing if its worth carrying on with this passion that i have.

I will keep the forum posted with developments 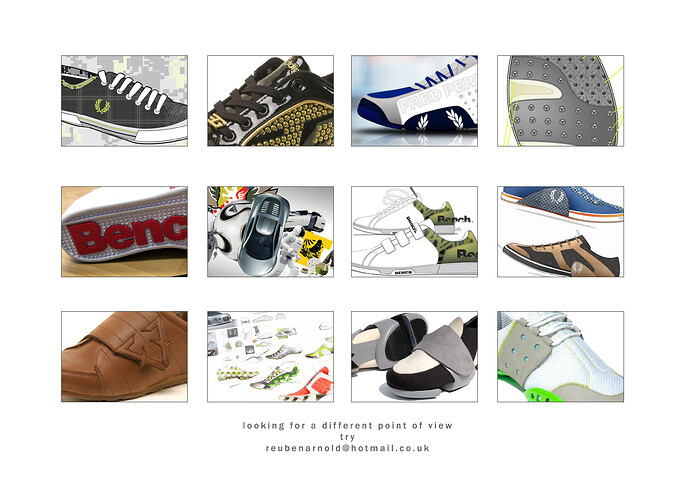 … carrying on with this passion that i have…

Fantastic. That is wat it’s all about.

Congratulations, Hotmix. It’s cool to see you shouting it out loud too.

I’ve been getting tugged around for over 2 months now, and while I know I “have” the job, I’m still stuck waiting for phone calls and paperwork…will proably still be another month or so before I can actually start working.

Hopefully it’ll all be worth it and I can shout along with you.

Say hi to Graham for me

Are you based in London or at HQ

it is about time! congratulations!!

I always knew you had ‘it’

Say hi to ‘Glamam’ for me too, <my god what is this business, like, we all know each other?>

Many many thanks to all,

It has been a long road to where I am now, but I feel like all the work and effort have paid off.

I did my 1st day on Thursday last week, i got to grips with there spec’in process and all that jazz. They have just recieved a big breif from a supplier that is worth around Â£3milo so its really important that the work and the samples are the shizznit. I have been set the task of completing around 5 new outsoles by the end of next week. Then I will be off to over see them in China in around Oct.

Its really exciting its all new and i hope that i will stay enthusiatic at all times. Its not being creative in terms of creating new concepts of footwear but its going to lay foundations that are going to give me a platform to work from.

I will keep you updated

congrats. so you are with Fred Perry now? are they part of a group that does licensee footwear for Fred Perry and other brands, or is it in-house?

Thanks you MD & Richard

Im working for First Brands a side company form Hi-Tec, more value end than anything else, but hey im not complaining its good pay and great design atmosphere.

I know that its going to be a great place to finally set down and start to graft a career from, learn the stuff so I can go on and take Yo and Richards job…
hahaha


cheers Yo for the heads up i was trying to keep it as minimal about details as poss.
Boss im sure would agree with you.
thanks