BRIEF:
From the sink to the tub to the toilet to everything in between, how can we use design to save water in the bathroom? Next week when you’re in the shower, turn off the water, lather up, have your brainstorm, rinse, then log in.

PRIZE:
One Nintendo WII.
(Not bad for an hour’s time)

My entry. I noticed the biggest waste of water was waiting for the water in the shower to warm up. My design incorporates a heating element in which the water passes through. Senors read the initial water temp and adjust the heating element to provide the desired water temperature. Since the process instantly heats the water there is no need to waste water waiting. The whole thing is controlled by an LCD screen located on the shower wall. It controls not only the water temp, but pressure as well. Adjusting the water pressure can also help lower the amount of water wasted. Also just for fun, you can listen to the radio, view weather forecast, read email, browse core, etc. Because the LCD is Wifi enabled. (Disclaimer: Be sure to spend time your time reasonably; as reading in th shower can lead to an excessively long shower that will waste unneeded water.


Total time of sketching and rendering was a little under 50 minutes. The bulk of it was the render and the presentation. Sketch was pretty quick.

Like the old saying says out of sight out of mind.

Vista makes water usage in sight and in mind for taking shorter showers.

Vista is a water saving shower head that shows the amount of water you have used via a LCD screen in the top of the head. 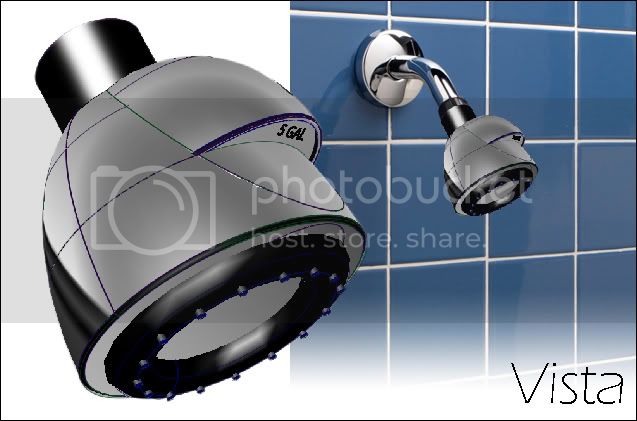 Furo Scrubber combines a mesh sponge, body wash soap, and water sprayer for a unique cleaning experience. Taking a Furo or â€œbathâ€ in Japan involves washing your body with soap, sponge and water bucket prior to getting into the communal bath. Using this inspiration the Furo Scrubber was born.

Furo Scrubber conserves 2/3 of the water consumed in a normal shower by combining the initial rinse and lather stage of showering into a handy scrubber. The idea is simple, the scrubber is submerged into water and the sponge is moistened. While under water the sides of the bladder are squeezed and the bladder fills with water. Pointing the water jet nozzles toward your body and squeezing the bladder releases a shower of water. To lather, press the top soap dispenser button and the sponge fills with soap. Once your body is lathered up, you can use the water jet nozzles or shower to rinse off. Furo Scrubber is a water saving solution that can be utilized as a partial or full body cleaning. 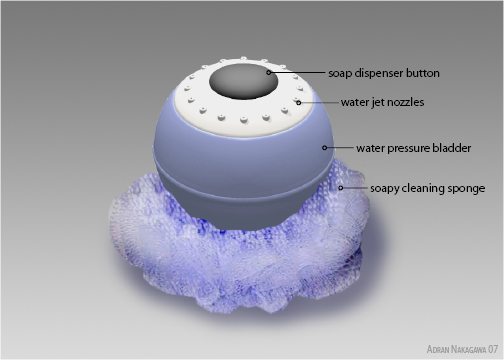 The idea comes from reusing the wasted water.

Upon the sink, there is a switch which controls the direction of water flow. When it’s on, the water will be filtered and flow into the water tank on the left. Later the water can be used to flush the toilette.


If water is really dirty, the switch can be turned to the right to let the water flow along its normal way.

The sketch is made in Adobe Illustrator in around 15 Minutes. The background and the color will be made in Photoshop in around 10 Minutes. 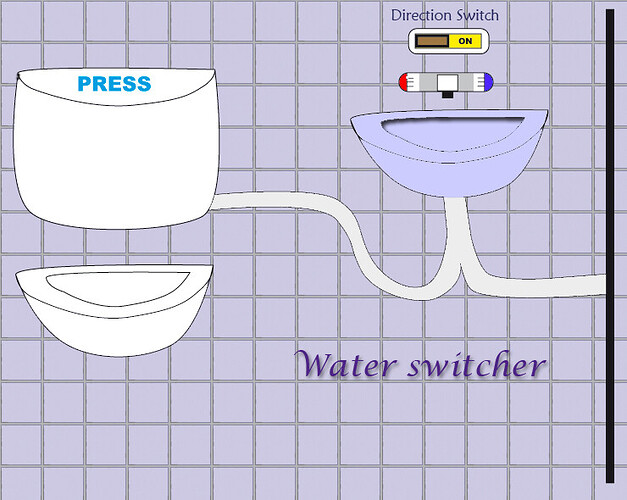 Wow, i thought i would never finish my (crappy) rendering on time!

My idea is that lots of water gets spilled onto the shower windows and goes directly to the sewage without even touching you. Or even if it does, it mostly contains shampoo. Therefore, you could collect that water by placing grooves along the bottom of the windows, covered with grids, to avoid any hair or other impurities and send that water right back to the shower water duct, using a one-way (or venturi maybe?) valve.

I made hand-drawn sketches, and then rendered in Illustrator.

(Please don’t bash me too much, i have studied Physics, not ID!) 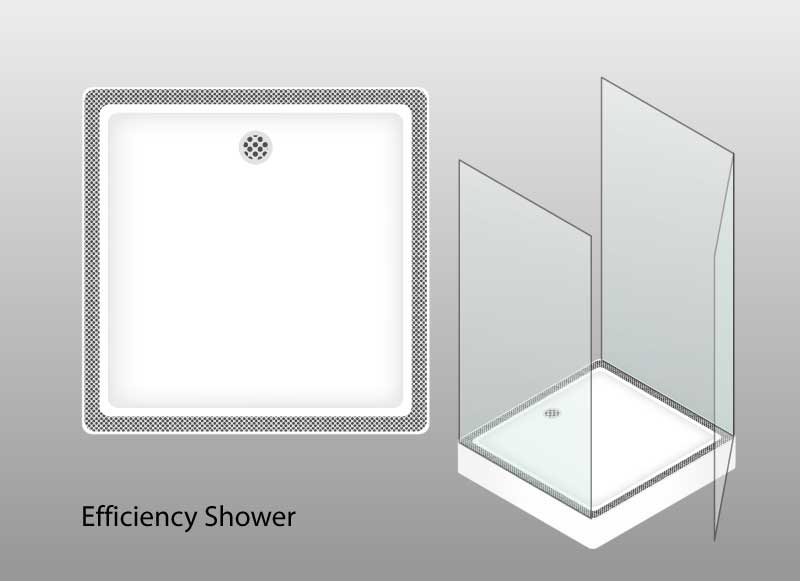 My guess is that no matter what we do, it depends on the people to save resources. We need to work trough design to create a change in the minds and the attitudes.

The idea: Use a simple design intervention on a standard product to generate an attitude change in the people.

The Slogan: People often see the problems far away and don’t take any action. The (laser etched) phrase intends to makes the user feel like a fundamental actor in shaping the future by bringing it to the present.

The Image: Demo taken from gettyimages.com, edited in a standard photo editing software. Total time: 40 min aprox. It communicates that taking care of water is related to the creation of life.

This could be part of a wider marketing campaign in which different phrases with stats could be engraved on water related products.

By the way: Did you know that we use around 77 galons of water per day? This gave me another interesting slogan: The Core 77 reasons to save water, or… Wii can make a difference 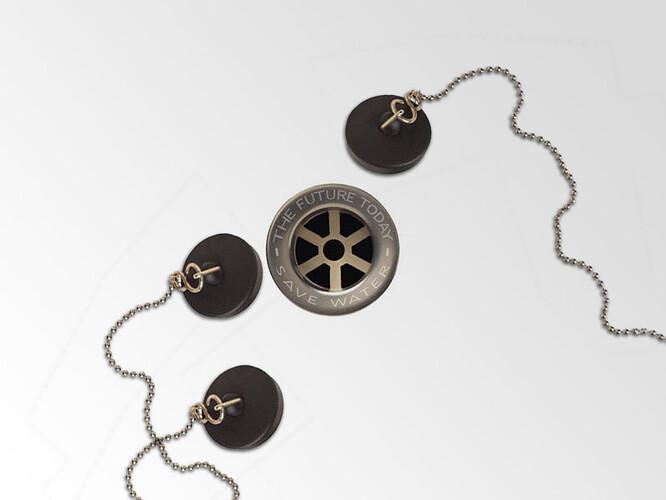 This is for all those that have jumped in the bath, only to jump out twice as quickly due to the bath being a lot hotter than you imagined! And then gone on to drain (aka. waste) the water and refil with a bit more cold, sitting on the side dipping your fingers in waiting for that perfect temperture. If you’ve had such problems, I introduce…

MAX… the rubber duck with a purpose!

MAX the duck uses a thermostat on his tummy, so when he’s bravely swimming about in your running bath the temperture is displayed on his backpack. Using his backpack the user can set their perfect temperture, when this is reached MAX will alert you with a few ‘quacks’. Allowing you to then maintain the desiered temperture, consequently avoiding the wasting of unneeded hot or cold water. 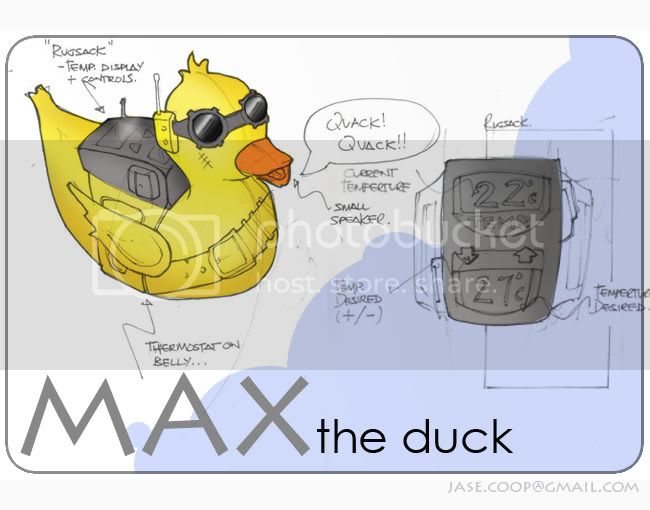 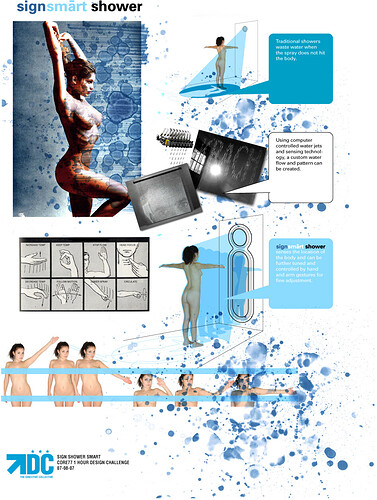 The conclusion i reached was that users really don’t know how much water they use daily, and to quantify it for them would give a benchmark as to what a good day and a bad day was like. Seeing the meter ticking away gives a visual incentive to shut it off. Also Quantus can help detect and stop leaks. 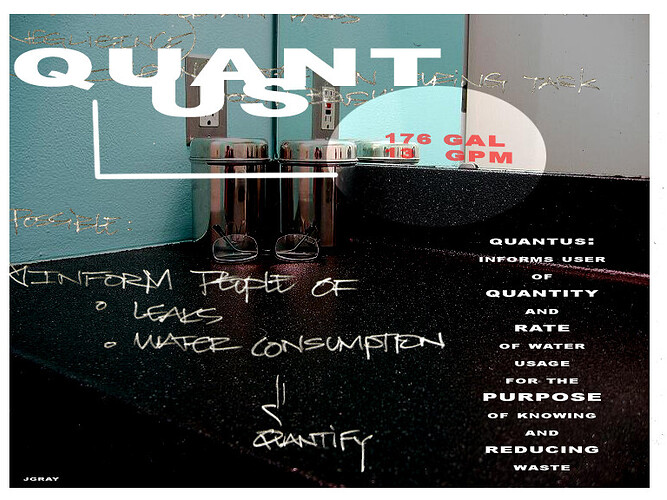 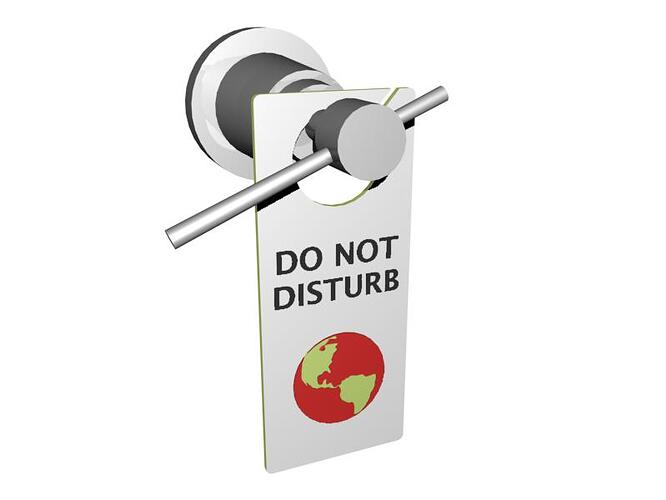 Leaving the water running while brushing your teeth can waste 12 liters of water a minute. Most people turn the water on to moisten the brush after first applying the toothpaste and leave it running until finished. My idea is to eliminate the initial step so that the water only needs to be turned on to rinse the sink after spitting, thereby saving approximately 30-40 liters of water per person per day. 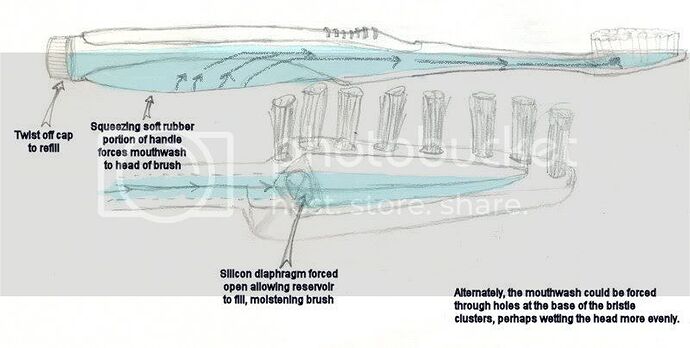 The handle of the brush incorporates a rubberized bladder that is filled with mouthwash. You gently squeeze the handle forcing the mouthwash onto the head wetting it–no water needed! And the mouthwash leaves your breath minty fresh

I saw this challenge a couple of days ago and have not had time to draw up my idea. I plan to do that this weekend (if allowable).

To be honest I have had this idea for a couple of months but have not been able to do anything about. Perhaps this disqaulifies me already? That’ OK because I’m not really in it to get a prize, but I do really appreciate what Core and its members are trying to do.

My idea: To laser/acid etch a image of the globe on drain stoppers, and related bathroom/ kitchen sink fixtures.

This is a statement to save water, and to be cognizant of the chemicals that we pour down our sinks as well.

Like I said I plan on doing a quick mock up of this over the weekend (sorry I can’t do it now) as I am barely keeping my head above water at my job (no pun intended).

My hats off to cuototo and summo who have submitted simlar concepts. Also thanks to the other submitters as well. Great job and great cause.

I’ve had this idea for a while. Looks like rch beat me to it.

-It uses similar tech to bathroom urinals, so the water is only on when you’re close to it, saving water.
-You’re free to step away and lather and the water will cut off, conserving it. You really only use the water for initial wetting and then rinsing.
-Also, this design will use the pressure of the water and the water running through the connector to recharge itself.
-The user can position the beam exactly where they want it to be.
-The beam probably wouldn’t be visible until the steam runs through it like in the spy movies. But it would be nice if it could leave a light on the floor where it hits in the beginning so that there’s and indication of where the beam is.

I didn’t do any form development, etc…it’s just to get the idea out and to practice with this new digital sketching stuff.

Ok, here is another simple one that could make the people think and change their attitude.

The Sponge World could also be great for kids, and I think it shows in a very graphical way that you have the world in your hands (and you are filling it with soap). 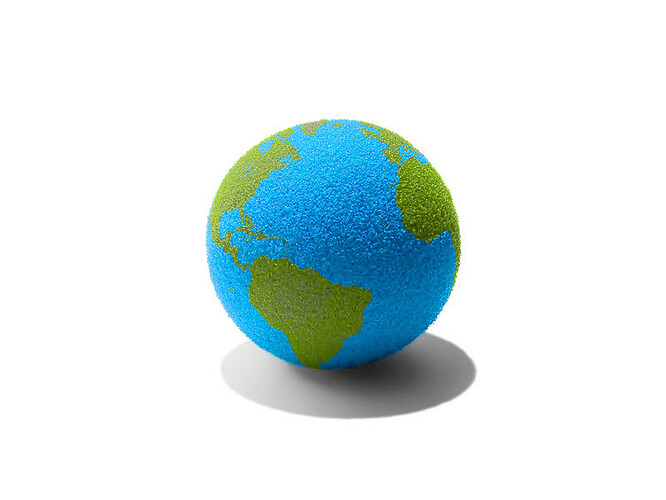 Low-tech, helps people save water in a way that also helps them budget their time, and is retrofittable into a fairly large number of existing showers.

Can be used in co-operation with a water-saving head to save even more water.

Time: About an hour.

my idea is very simple

so “tube” the water saving water head can help us

by changing the way people use the shower set from typical water valve and lever type that we have a hard time closing it(cos we,human. are too lazy blah blah blah) to become a “button” that you’ll have to push and hold it.
After you release the button the water will automatically shutdown itself rather than just let it flow on and on and on…