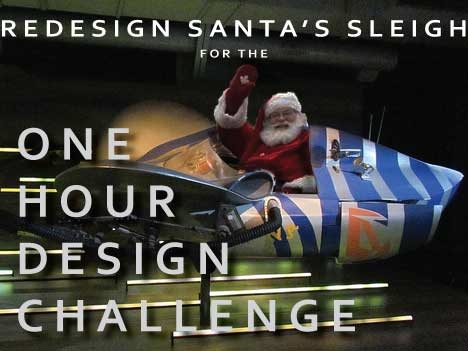 BRIEF:
Santa needs a new sleigh. He’s been driving his old jalopy pulled by reindeer. Surely it’s time for Santa to get a new ride, and who better than the Core77 Community to bring the initial concepts to the table for discussion.

CRITERIA:
Designs will be judged purely on subjective opinion of the judge(s). Minimum entry will be 1 8.5” x 11” page of thumbnail sketches, and 1 8.5” x 11” rendering of the final design. The 1HDC is about your rapid visualization skills in conjunction with a fun topic. Good composition, line weight, and rapid concept development will weigh heavily in the final design.

HOW TO ENTER:
Participants must execute their design in only 1 hour, based on an honor system. Remember, you’re posting to a pile of peers who know what is possible to be done in an hour. To enter, upload your entries to the designated competition forum.

To discuss the challenge and the entries, visit the 1HDC discussion forum.

Lets get this party started! Obviously I’m not eligible, but wanted to get one up on the board to light a fire under you guys!

The SC2012 with N-O-N (Naughty-Or-Nice) Telematics, 8,000,000 Reindeer power turbines and plenty of storage for that bottomless sack of toys.

All old school. Ballpoint, markers, and a little white pencil with white and black pastel. 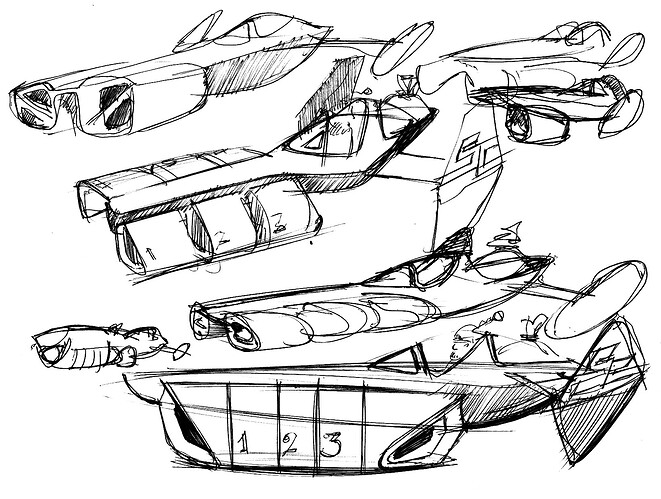 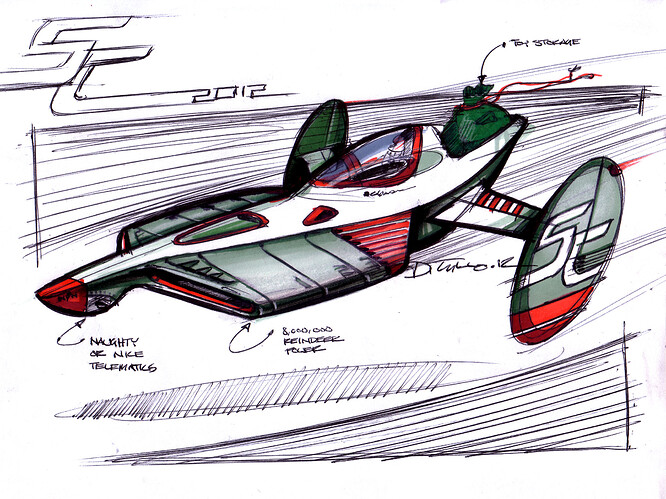 Well, we all know that Santa has gotten old, so in an effort to help him out with some of the tasks at hand during the year, here’s what’s been created…

The 9 reindeer have been replaced by 4 reindrones…and we’ve changed a couple of key names…Rudolph…no more…he’s Drudolph…Santa Claus changed his name to Santa Draws, and he now has a full staff of industrial designers to help the elves with product development.

ReinDrone features
-electromagnetic ball and sockets all for linking and connection to the sleigh
-LED headlamps mounted on front of engine.
-Wing mounted skis for water landings (designed with global warming in mind)
-All wheels in landing gear snap in (just for old times sake) 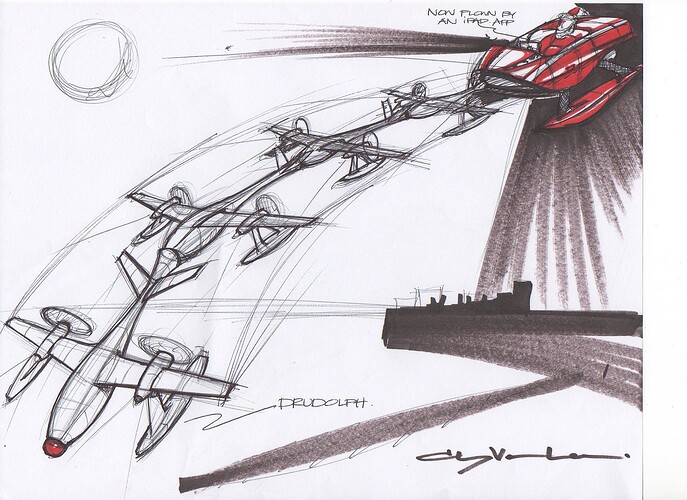 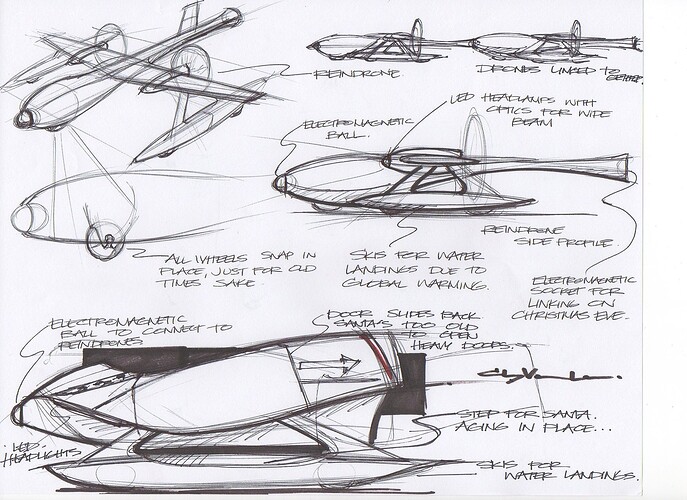 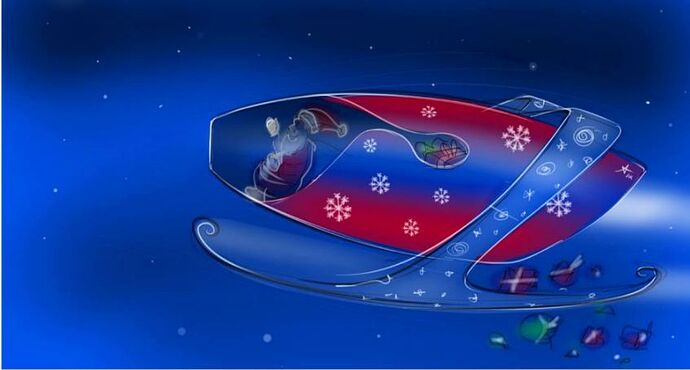 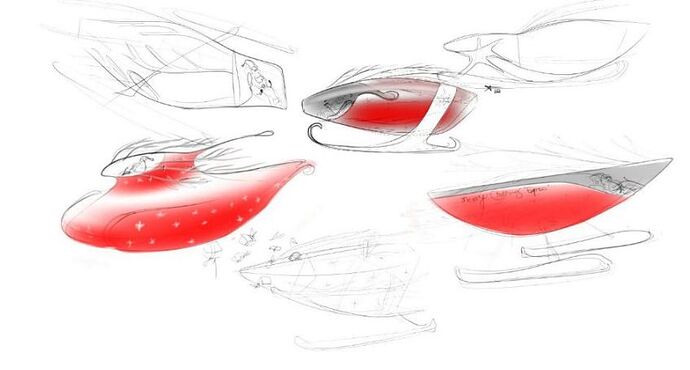 The final image came out a little more “Harley Davidson Santa” than originally intended. It took more than an hour to render, but I wanted to share it anyway. 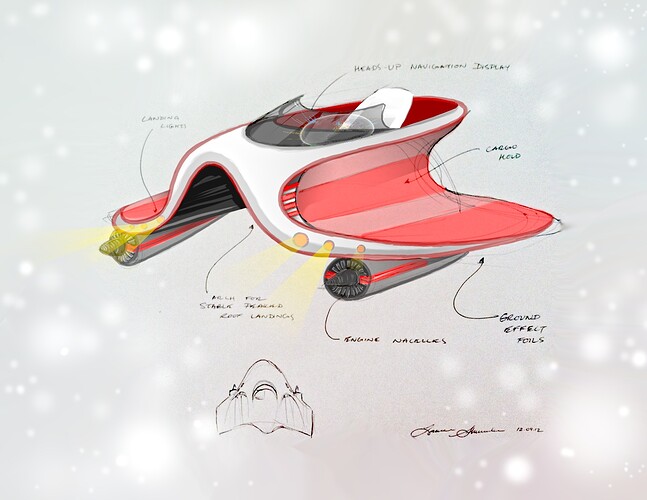 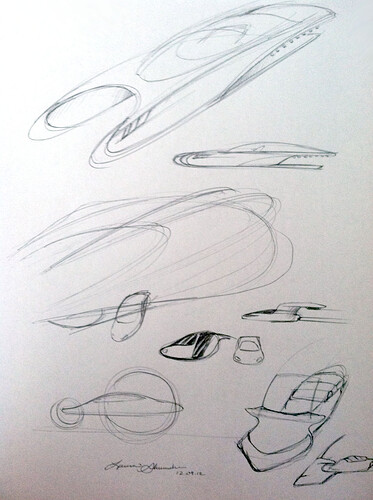 Like Yo, this one’s not eligible. I spent about 25 minutes designing a new sleigh for Santa with my son while he was having his bath the other night. I didn’t get around to scanning it until this morning. 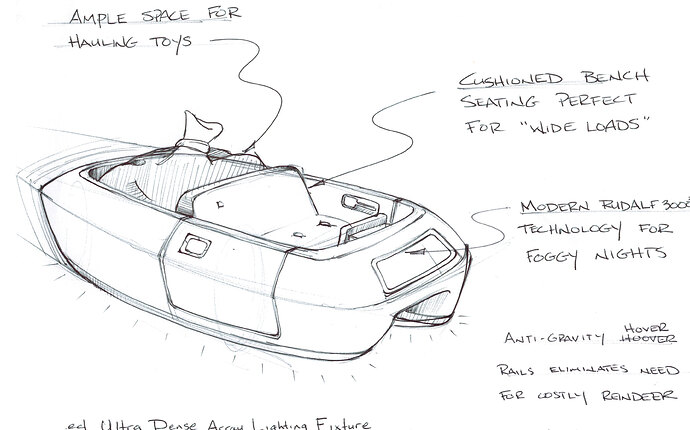 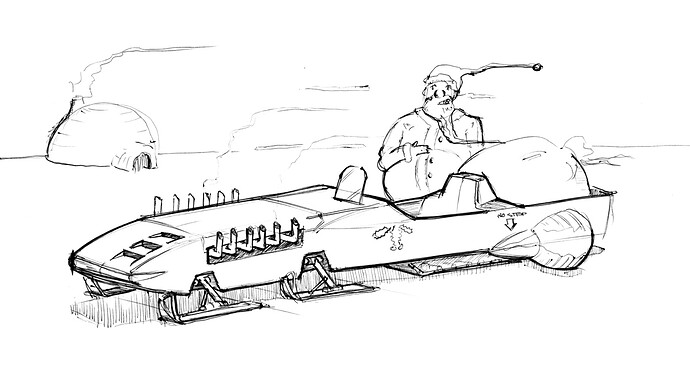 Its been a while since i have been active here.
did this to break away from the excel and powerpoint marathon!
simple shape exploration and communication, starting point was the " roundness" of Santa.
And why not have bird like drones do the hard work

Photoshop with brush and erasers, Just about an hour. 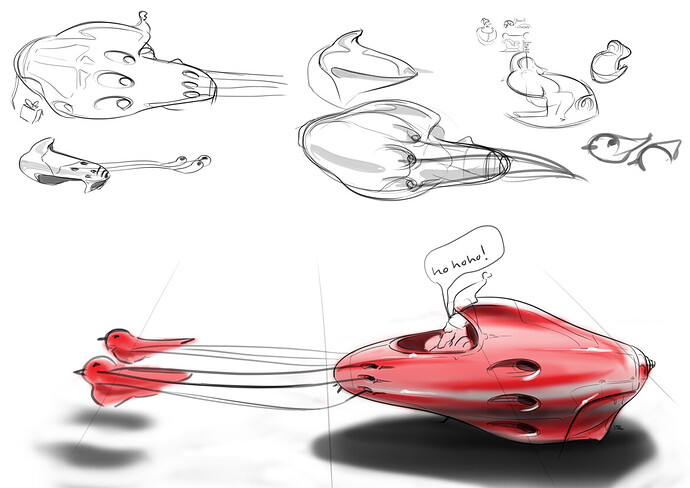 Sort of a retro flying sleigh. Long Jaguar E Type style nose and Candy Cane curl tail. Toys in the front and engines in the back!

I spent too long on trying to get the line drawings right so I had to rush the marker rendering and it did not come out as well as I would have liked. 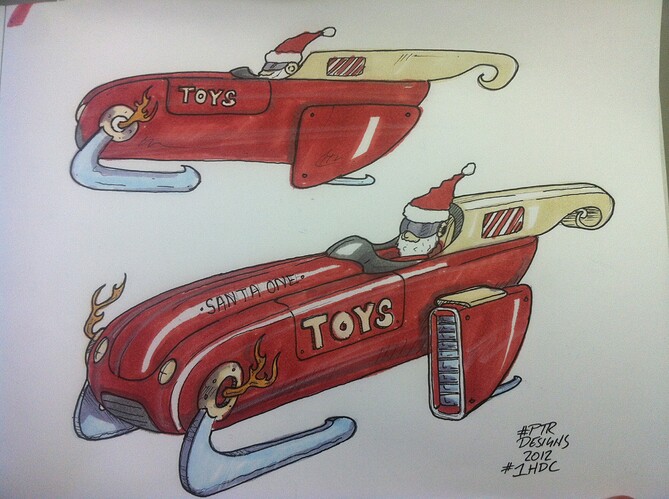 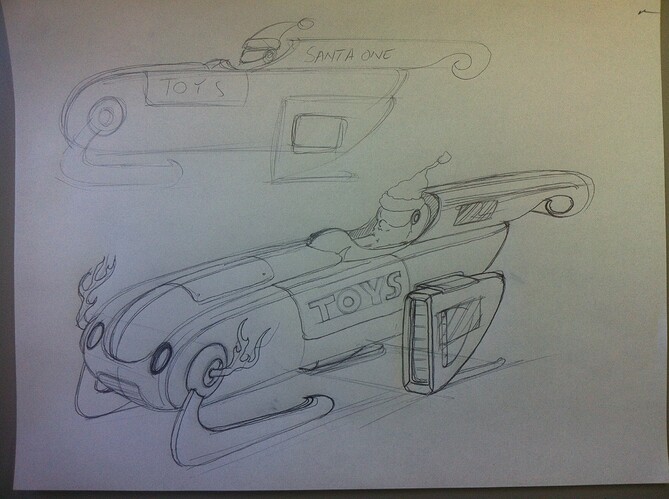 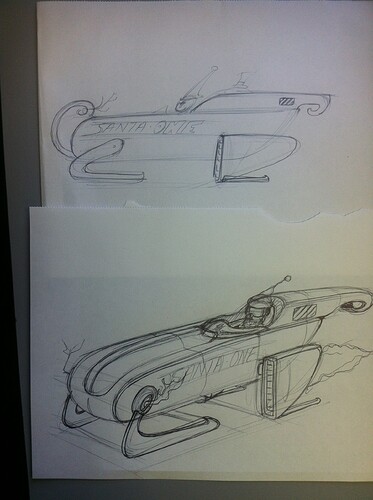 This am decided to throw something together. More like Santa alternative mode of transportation

Forgot to read the rules…no thumbs. Just jumped on the Cintiq and hit it. 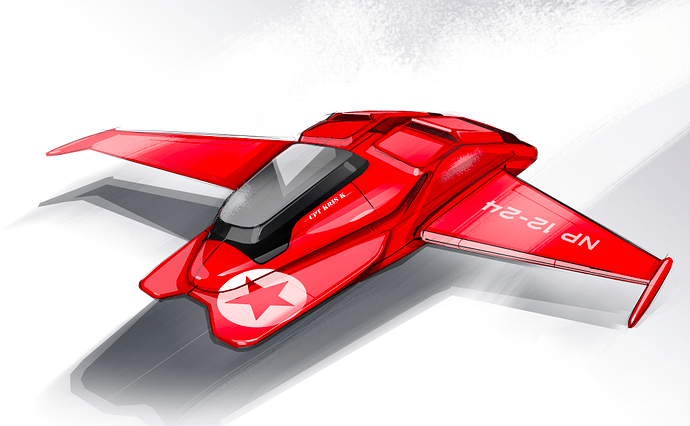 First time sketching something within an hour, was harder to sketch this quickly than I thought! Ended up not using the whole hour because i didnt render it. Anyways, the side cannons were my main goal to communicate, ball point pen 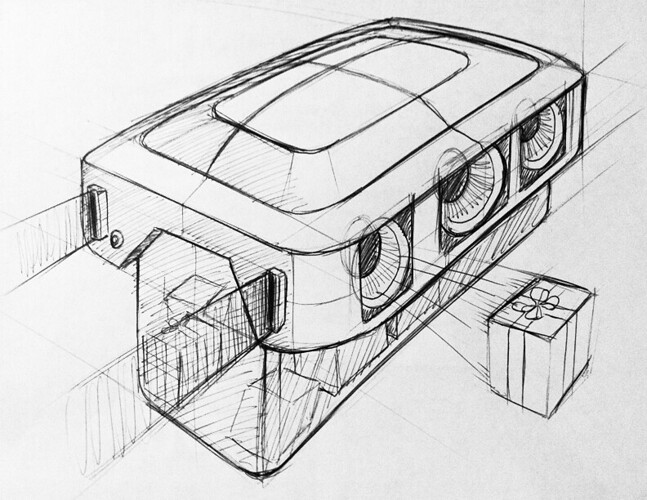 It’s almost December 21st and the History Channel, w/ all of their doomsday and alien programing, has got me thinking what if…

Time is money and with the down economy and last year’s elf strike, overhead has sky rocketed. This has forced Santa to take on a greater role in the workshop. Santa has decided to invest a lot of money into a more effective present delivery system. He has decided to replace his eight reindeer with eight 3ft. dwaroids (#6 is pictured). These mechanical elves increase efficiency by completing deliveries at the speed of eight Santas. Now Santa can focus more on next year’s marketing campaign. In a recent interview in the Holiday Gazzzette Santa was quoted saying, “2013 is the year we have adults believing in our cause again!” Let’s just hope his new “helpers” obey their programing and don’t become self aware… 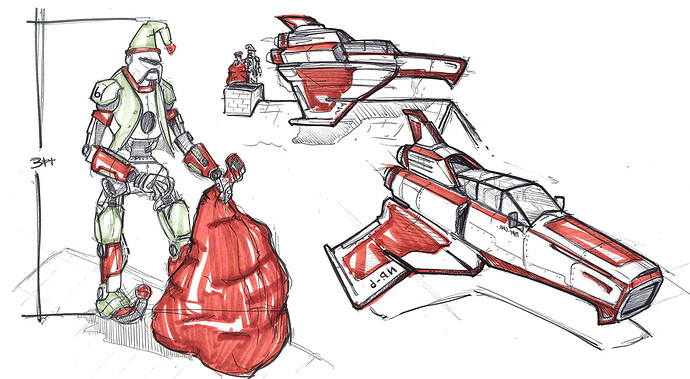 So I ended up with a design that evokes Santa’s reindeer:) 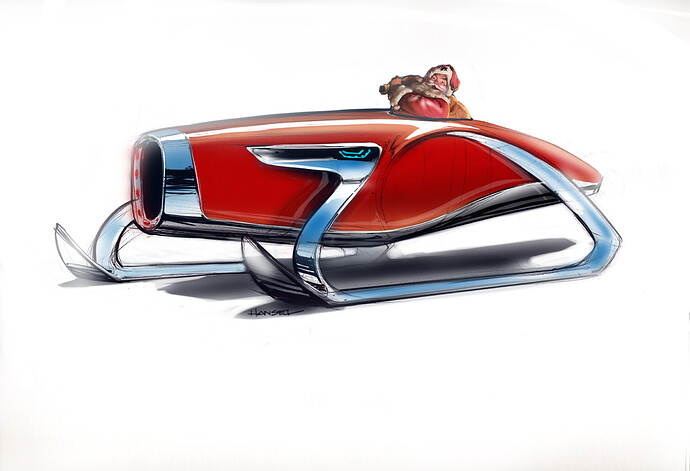 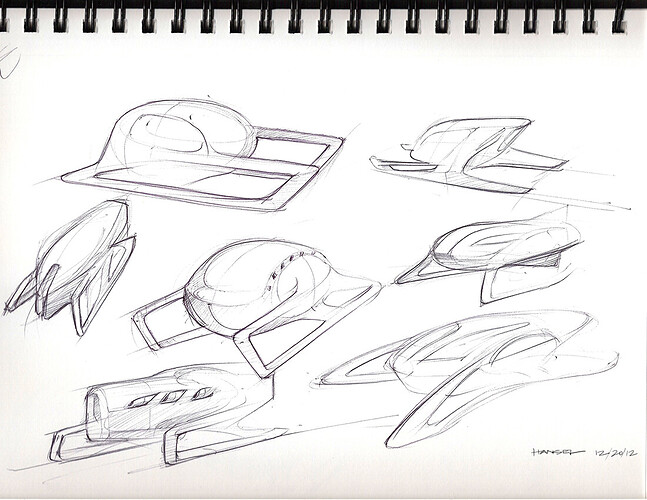 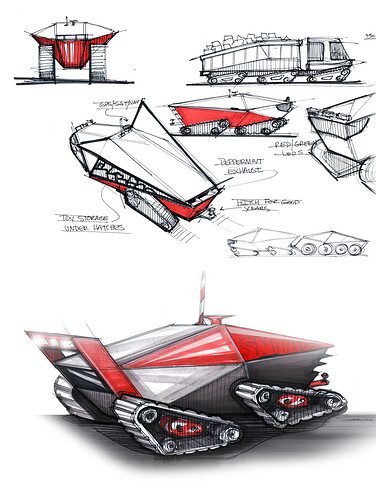 Gonna Lock Down just over an hour…say…3PM Pacific Time.

So you have time to get one entry in!

Glad to see the deadline is extended. Needed a good reason to continue procrastinating instead of overhauling my portfolio! Blew the deadline by 30-45 mins or so but still fun

Throwing another into the ineligible pool, The SANTA MANTA. Long story short Santa is getting sick of NORAD’s yearly Santa Tracker b.s. 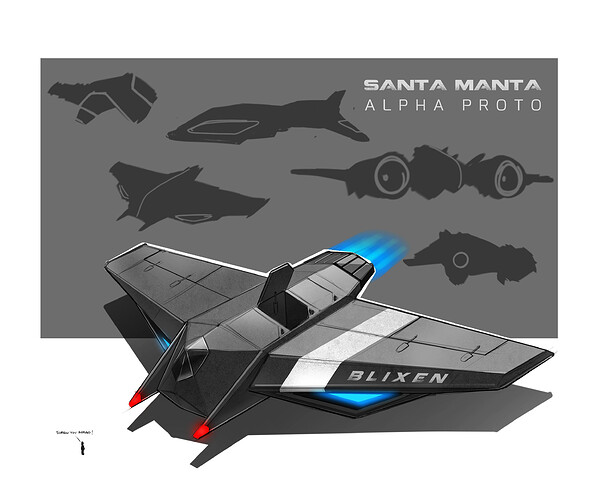 This is my first time here and I hope not the last one! I saw this thread a week ago but with the new year’s celebration and that I could’t spend time on this until now. I’m in my hometown and I don’t have all my sketching tools with me, maybe next time! 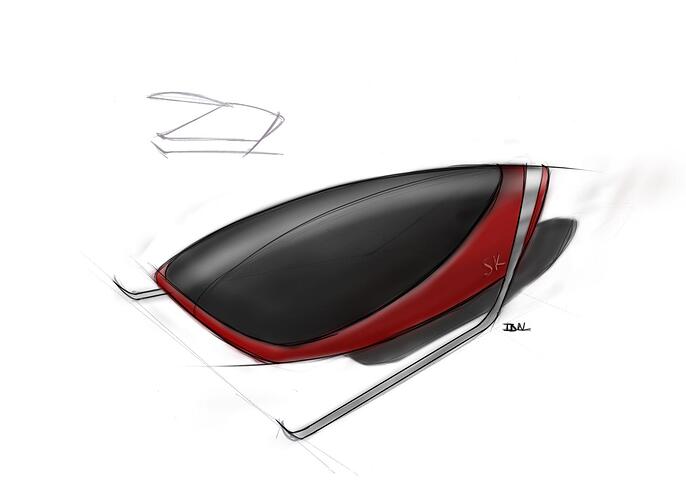 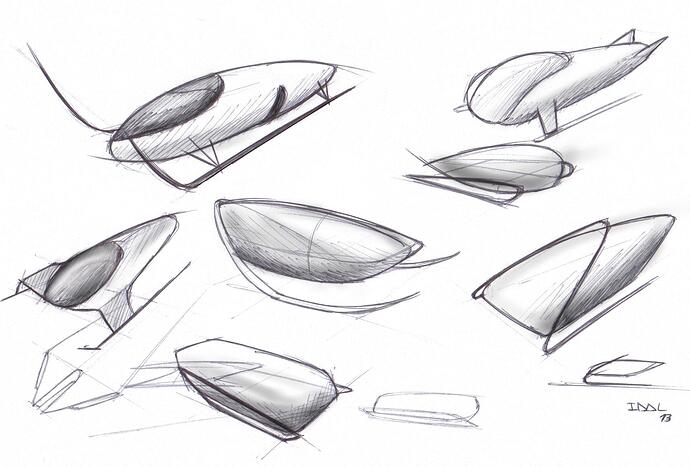 Hi,
I am usually the one spying around, but I wanted to dive and participate this time.
These sketches took me a little more than the requested 1h.

I did it as a trainning session, to encourage myself to explore forms outside of the usual things I do.
It was a fun exercise and I wanted to share it.

Basically, Anakin sold his pod racer forward turbines to Santa, who wanted to have something with a little more torque & volume than actual Skis+Reindeers.
World population growth consequence.

So Happy New Year to everyone and looking forward to participate to the next 1HDC. 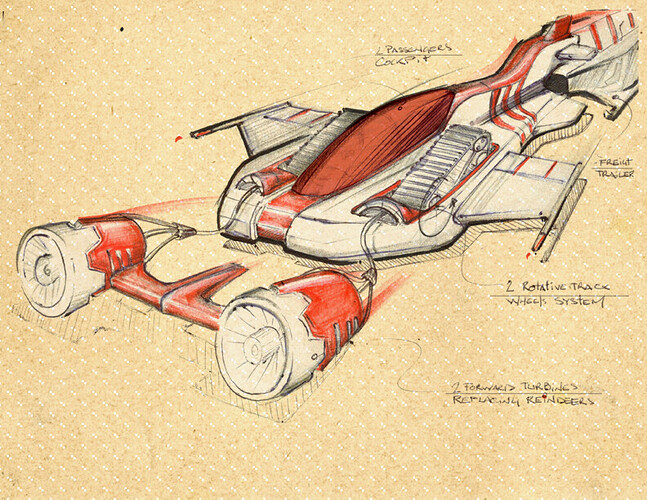 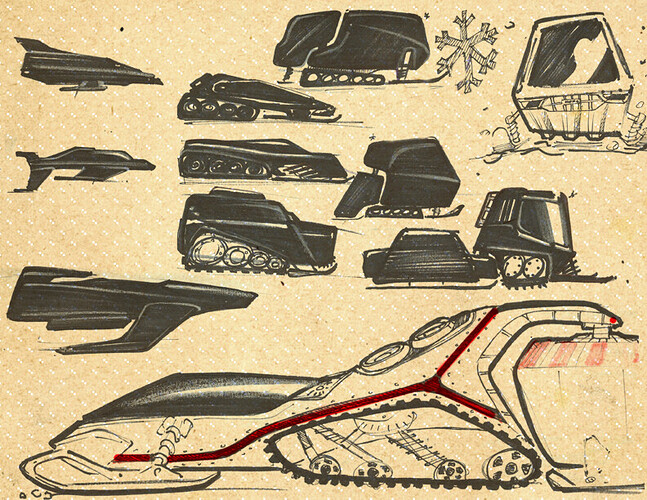 I wanted to give Santa something… like a motorcycle haha 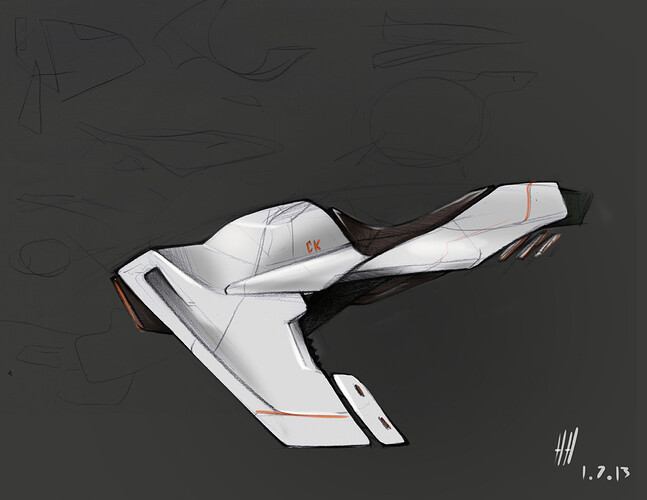