The ‘RunAway Mouse’ is activated by the cat’s collar. As the cat walks past the mouse the mouse begins to run. This action entices the cat and causes it to chase the mouse. 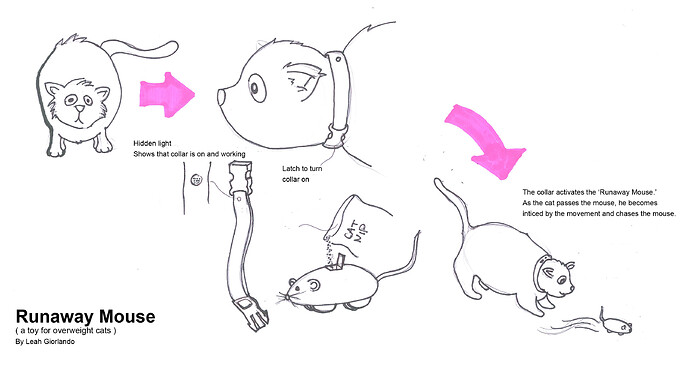 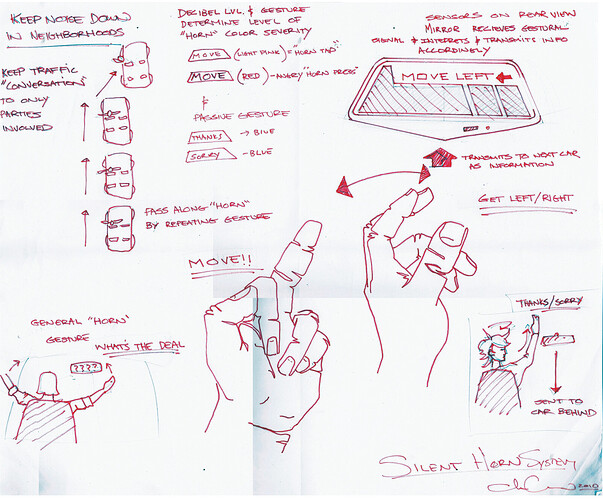 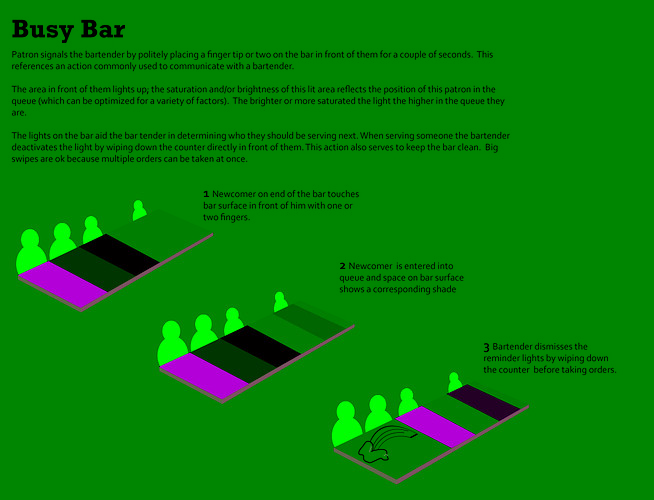 (First, this product DOES NOT make the drink for you. It is not a vending machine. )

The Siren is an ordering device that uses rich, interactive gestural controls to allow the customer to custom craft his or her drink. The controls are designed to simulate the real action used by Baristas.

For example, to add espresso shots, toggle a horizontal lever which resembles the espresso portafilter. Three clear “ice” button toggles determine the amount of ice, and a cylinder resembling an inverted whipped cream aerosol can is pushed to add whip. A large hand crank wheel is used to add “foam”

Once the drink is specified, a printer located below the cup prints a QR code on the bottom. This code is used by the baristas to know what you ordered. You can also scan it later with a cell phone cam to tweet what you just drank.

The Siren also features a “siren” button which can be used to complete a partially configured drink based on your order history, tracked via your starbux card. When this aggregated drink data is combined with advanced barista algorithms it can be used as the “siren’s intuition” to generate a new drink you might like, on the spot. Putting a generative design tool into the hands of customers.

(also, this is supposed to be a little silly, but in a fun way. The QR code actually works, try it) 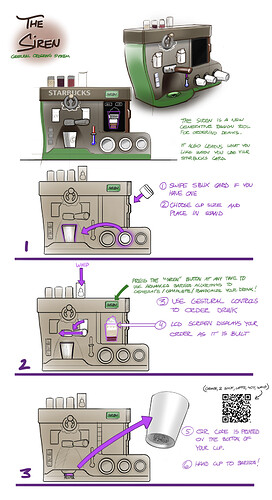 Turning the light up or down.

The light switch is part of the hanging string.

To change the level of the light, the user simply pushes the small white ball up or down the string.

Could relate to ‘putting up the blinds’ or even the solar system (ie. the further a planet is from the sun, the darker its world is) 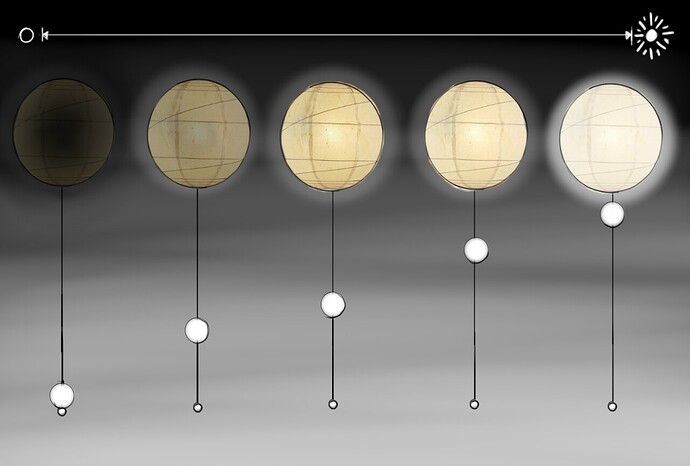 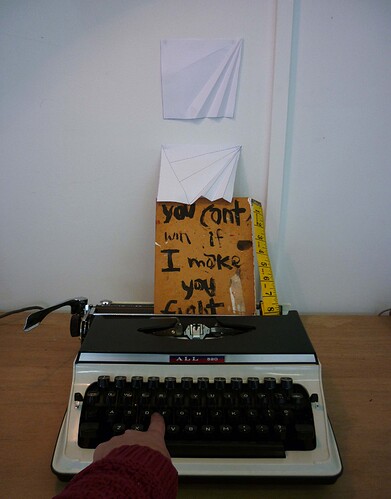 TV goes to sleep when not being watched. 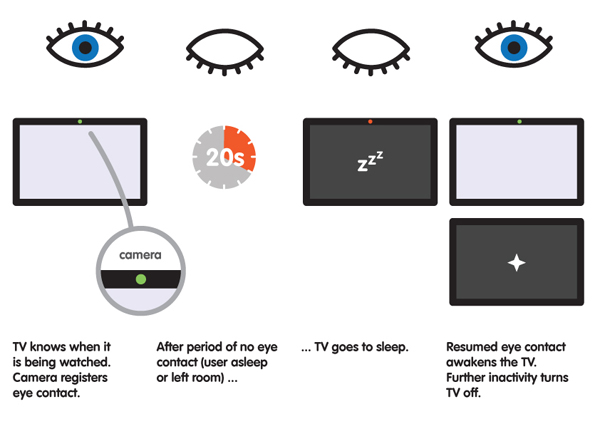 I wanted to bring more play and interaction into working with a computer.

Didn’t really play around with the form so much as the idea.

Roll to scroll.
Bounce to zoom the screen. Bounce on walls, desk, floor.
Hold button(s) and tap to zoom out.
Ball glows green when battery is full and red when low.

Im going into my junior year in the I.I.D. program at Syracuse University (second year). Figured I’d give it a shot. Feedback and tips are appreciated 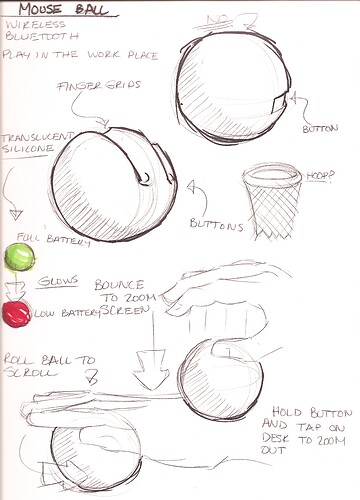 This is a trash compactor that has an IR beam near its top so that when the bin is full the beam is broken and the compaction automatically begins. 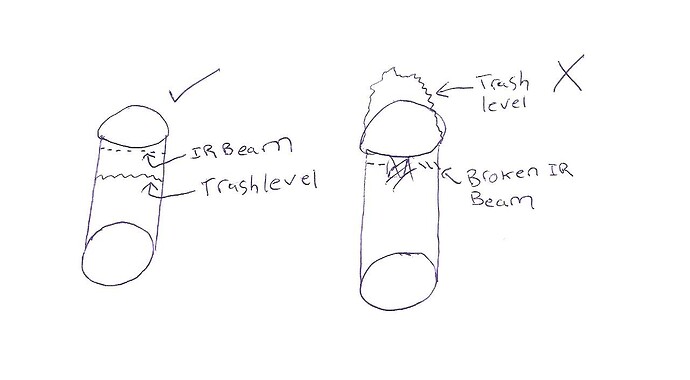 I live with three women. Meaning I get yelled at for leaving the seat up. Well no more I say, with my submission I decided to find a way to do my business, flush, walk away, and not get yelled at. I did that by simply adding a waterproof wireless box on the inside of the toilet, and modified hinges to sense the different direction the seat was facing, when the seat is up, and is flushed, the hinges sense this and lower when the flush has been made. 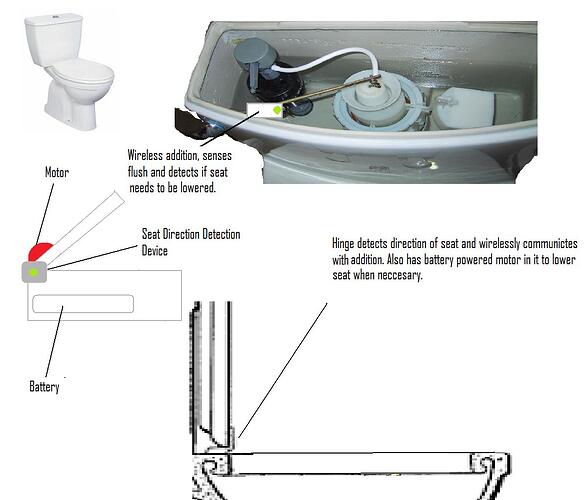 speaker4whiteback.jpg1310×552 27.5 KB
My design aims to solve bad-morning scenarios or rituals. A wall-mounted alarm clock/radio eliminates its owners ability to sleep in through the alarm. 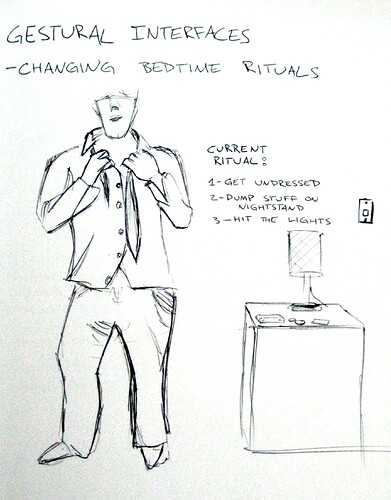 ritual 1-3.jpg1728×2205 226 KB
The usual causes of sleeping in (through my personal experience only) are perpetual-snooze-button-slapping or alarm-unplugging, and phones losing battery power in the middle of the night and effectively disabling the alarm set on it. 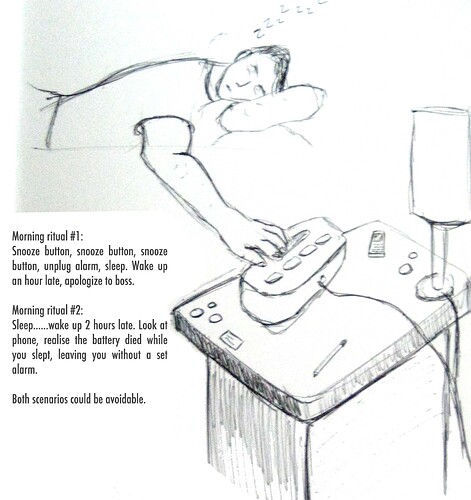 The re-designed alarm clock does three things:
Makes you set an alarm
Makes you charge your electronics
And doesn’t let you sleep until you’ve done both of them. 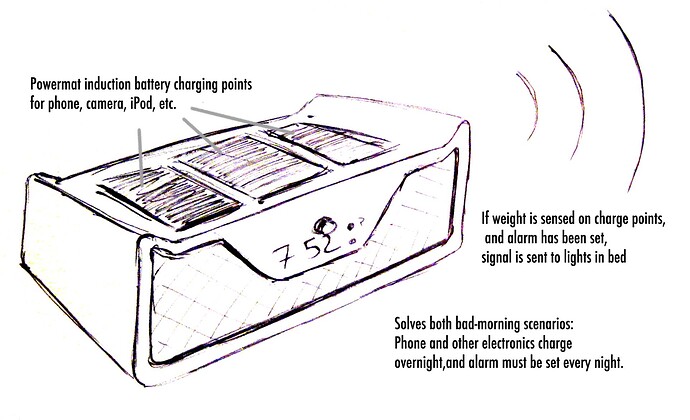 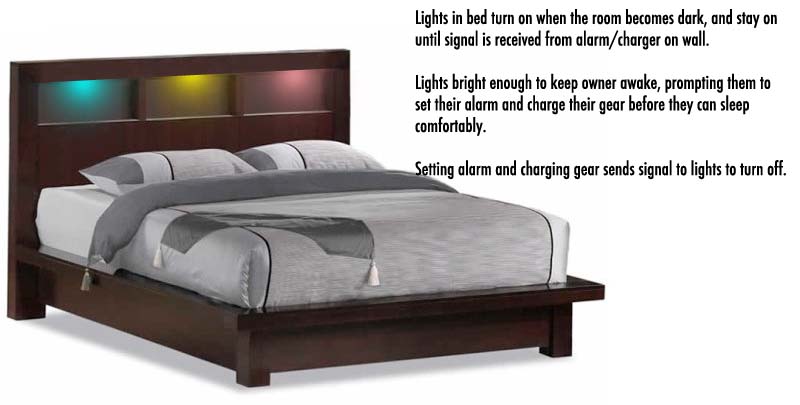 I know, already taken…but still a great idea.
The difference here is not auto-on when pan is in place.
Many pans need to remain on the stove top and be off. 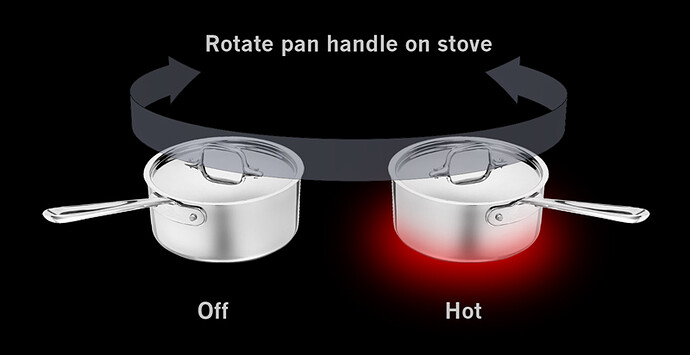 sort of gestural, sort of intrinsic reward system… the more you brush,
the brighter it glows, and over a day fades showing you brushed

Through better communication to the device, this streamlines the process of pausing music when the user is no longer listening to it.

anyone want to help me patent this?

Kind of surprised this hasn’t come up yet. 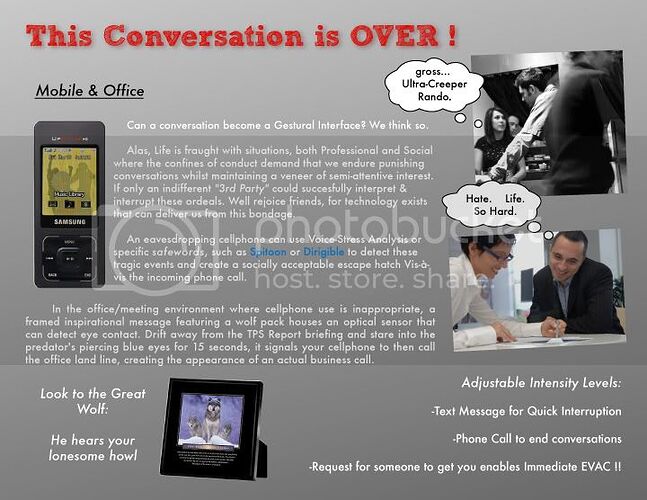 You know you want it!

Fed up having no job, cheered me up entering!

Re think of the answer phone system.

Problem: The pinncale of flat and boring devices are phones and their answere phones. Sitting\standing infront of a machine listening to messages with that air of uneeded anticipation of who left a message and then having to traipse through messages to get back to the one you wanted to listen to.

Solution: An answer phone system which stores messages in envolopes. open the envelope to hear your message (similar to birthday cards with recorded messages). Each envelope has a dry whipe surface so any details can be jotted down in addition the base displays the number who called and left the message, as well as a small led indicator to let you know there is a message in the envelope. 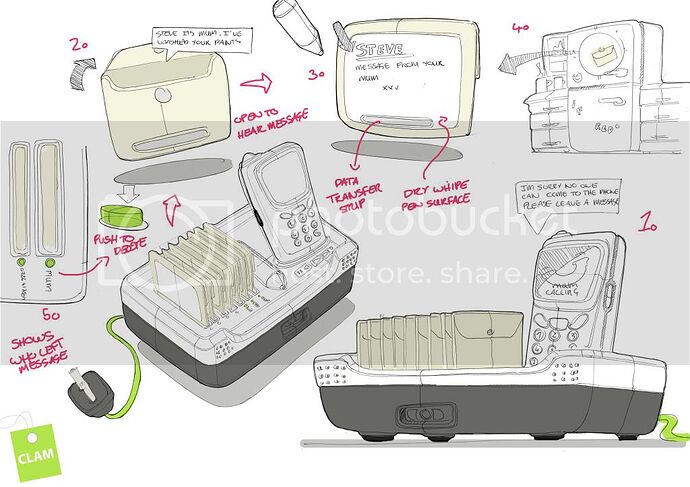 Having had a number of experiences with roommates that who have the tendency to fall asleep in the shower, I humbly present a solution.

This shower head functions as the method to turn the shower on and off, a physical display of the amount of the time that you have been showering and a way of waking up those who might begin to doze in the comforting warmth of a good shower. If untouched, the shower head slowly descends and eventually shuts itself off - either prompting the user to wake up and start their day (again) or restart the shower to continue cleansing himself. For those without the tendency to fall asleep in the shower, this functions to remind the user of excessive water usage and waste. 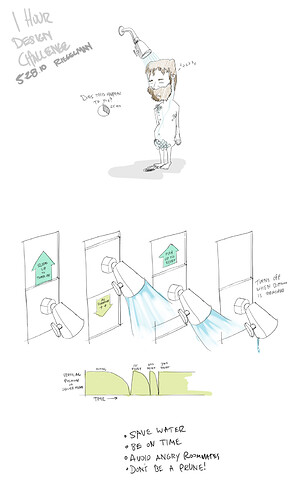 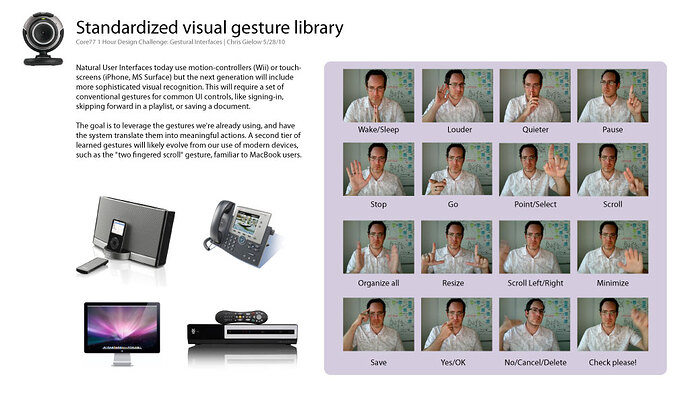 This idea is all about tracking time while designing. Our firm has used several software solutions to this problem (tick, timefox, ect.) but it would be nice to have a gestural interface as well (especially since I’m particularly bad at remembering to use them). Why not have pencils function like a stop-watch? I could have a pencil designated to each project- when I pick it up, the clock starts, when I put it to rest again, the clock stops. 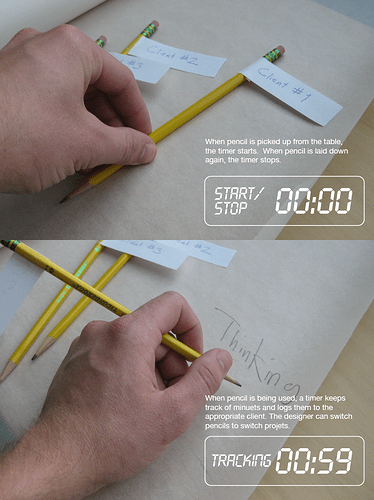