Please post submissions only to this forum. Keep all discussions to the 1HDC 08.05 forum.

I forgot to unlock the forum at 9.

The carbon ankle brace prevents loss of energy from ankle flexion during the power stroke while cycling. The rear carbon attachment transfers the force from the lower leg to the pedal, thereby increasing power output and efficiency. 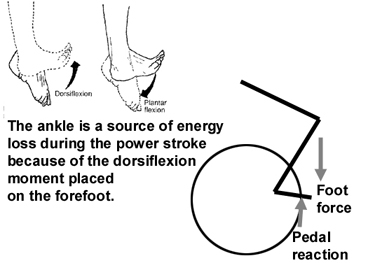 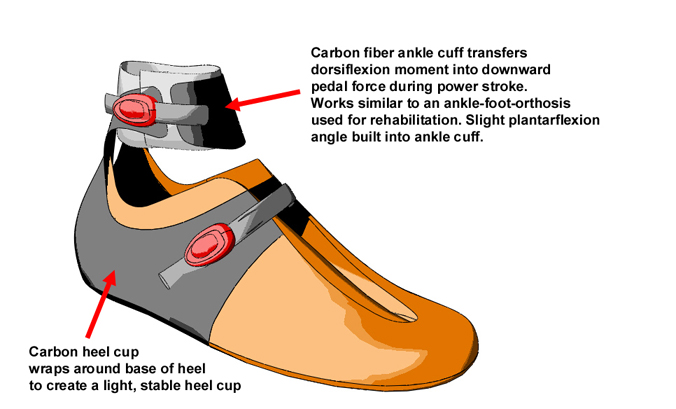 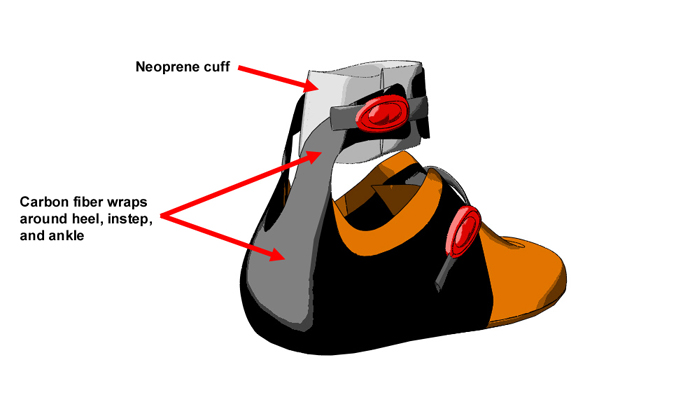 The design was based around trying to create new forms of foot support and stability, the final concept has an air system which allows the user to increase or decrease the amount of support to different areas of the foot. For instance if you require more stability on the medial side but less on the lateral side. The dial on the heal of the shoe can adjust the amount of air in each of these areas.

I have also cheekily branded it as a Nike and have incorporated the Nike swoosh into the front using it as both a ventilation point and the foot entry and exit point. 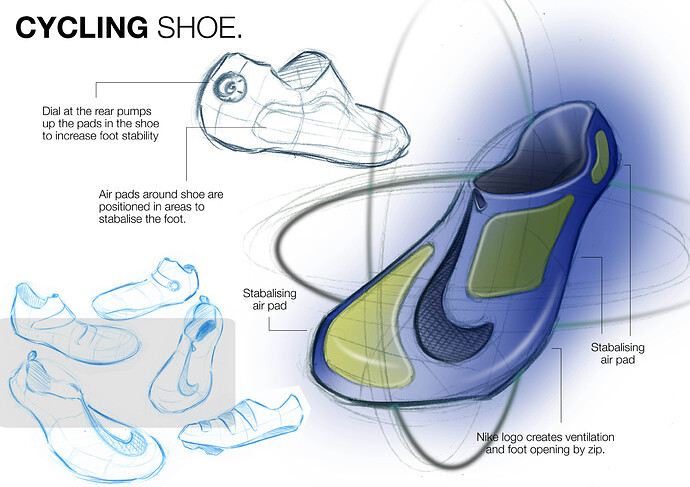 The Converse Chuck Taylor All-Star, according to Wikipedia, has sold over 750 million pairs between 1917 (the year of their introduction) and the year 2000. They are a true American design classic, and pretty green to boot. Chucks don’t need much to be pretty versatile shoes for commuting & c. They don’t have much cushion, but you don’t want that on a bike anyway. The high-tops (always the preferred style) give you lots of lace-up options as to ankle support. [/img] 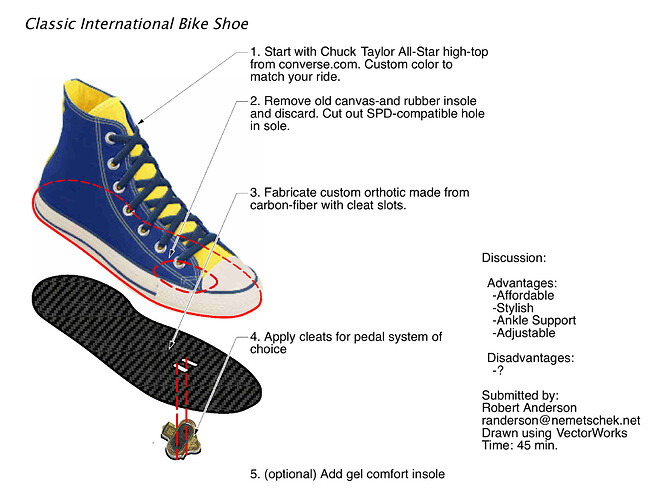 Did this last night…have a video showing the process as well, not sure how to post it here though. Hopefully peeps will get some stuff going on this.

My particular concept here is all about the chase for the yellow. Wearing yellow keeps the athlete charged and motivated to complete the outfit…Also looking at aero helmets for some inspiration… 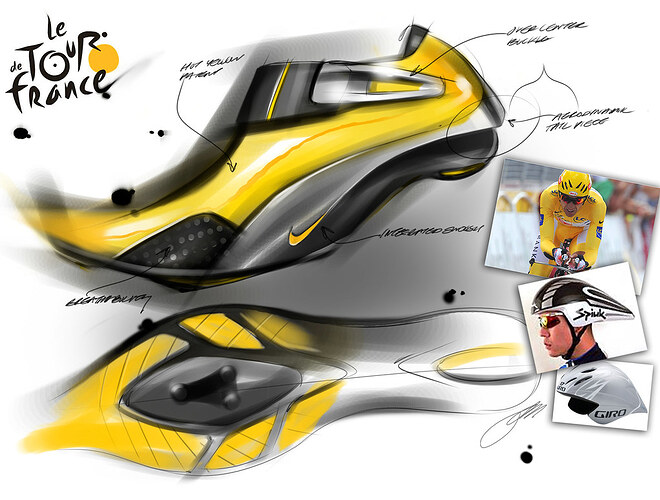 My concept is basically having the front of the shoe to fit perfectly the bike’s pedal. Additionally the middle part of the shoe serves for any regular bike.I added two reflective lights at the back of the shoe for security. 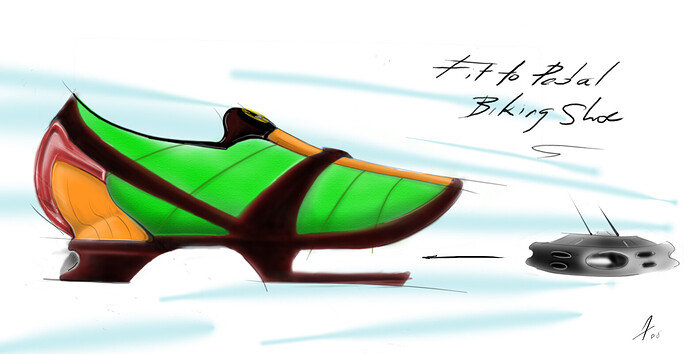 Not trying to reinvent the wheel.
The clipless system for road bikes works really well in my opinion, so my entry is just an 1 hour sketch of a cycling shoe I would buy.
R

so this is my first 1hdc entry. and i guess part of the whole thing is judging how much you can get done in an hour… ha. anyways this is the new shoe for carlos sastre. keeping it real with the red and yellow, hailing his home land, and giving the shoe some good breathability. 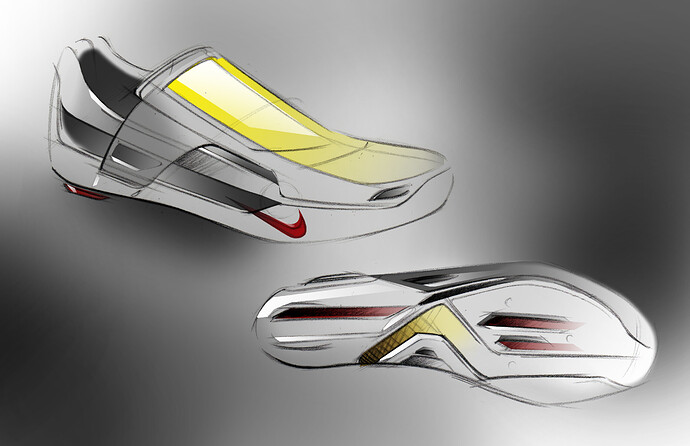 Ok so here is the link to the sketch of the cycling shoe. I actually did this sketch right after the one I posted here (when I saw the invitation to do a video). Its a little sloppier but shows how I work digitally.

Notice there are a lot of control Z’s in there. I like to just throw down quick sketches and sort of mold out the form as I go. I didnt for this sketch…but usually I will overlay this line work on another layer and clean up!

Hope this helps!..video is about 11 min.

Heres a shoe aimed for the vintage bike-snob crowd - my first shoe! lots of fun! 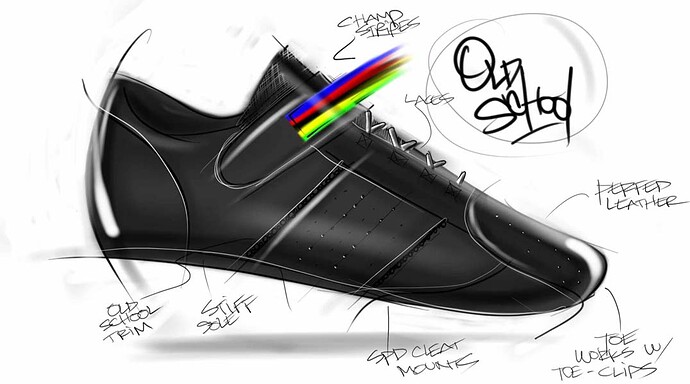 So for my entry, here’s the next lightweight shoe for the Garmin-Chipotle American team. There is a magnesium insert on the ball of the foot, between the carbon for added rigidity and decreased weight. The closure system is composed of only one clasp, with the strap encompassing the whole upper, for total adjustment on the fly. The upper would be made with flywire technology, which would allow for breathability and an even greater decrease in weight.

This is my first post in the boards, hope you guys enjoy. 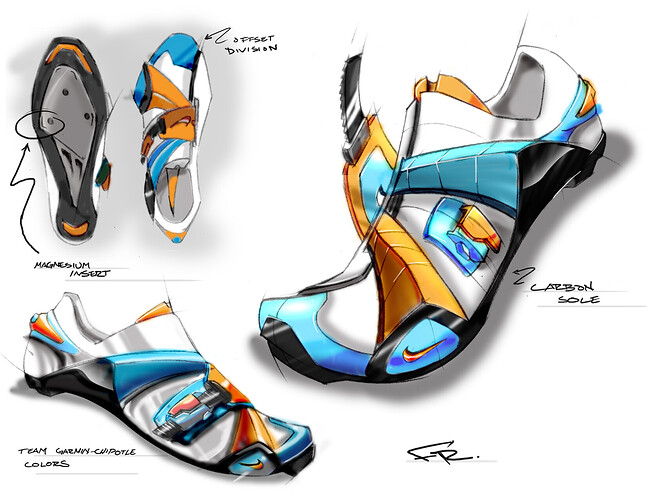 Around the time Lance was cycling his last Tour de France, I thought it would be smart for Nike to come up with a ‘After-Pro’ collection of cycling apparel. So I came up with the Lance Armstrong Retirement Edition. 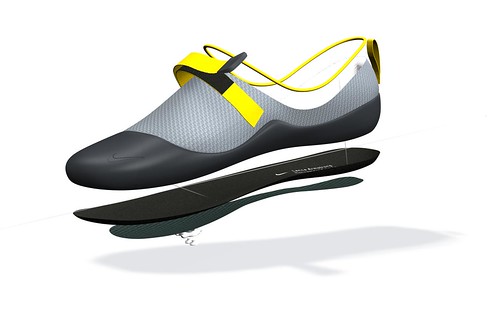 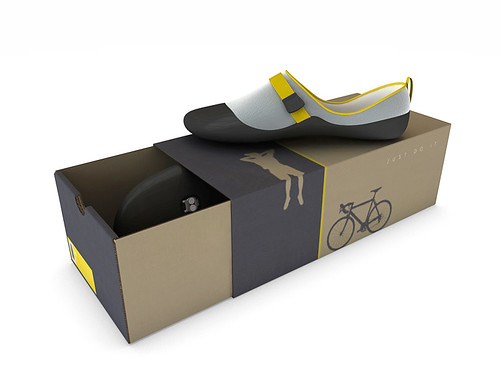 My entry is targeted at the cycling ‘novice’. A keen cycling enthusiast, though he is yet to take the big step and use clip-less pedals with his own pair of dedicated cycling shoes.

Going from toe clips to clip less pedals (see image) can be an intimidating experience and a few falls as you get used to the new system is likely. (Check out the first couple paragraphs if you don’t know what I’m going on about - http://www.bicycling.com/article/1,6610,s1-4-41-15223-1,00.html)

My 1HDC Cycling shoe uses a removable hook that clips into the sole of shoe and is secured using velcro straps. The removable hook can be worn when the rider is feeling his most courageous as he eases into getting used to clip-less pedals.

When the rider wants to go back to old ways, or is simply not riding his bike the removable hook can be removed.

The lacing system is designed in such a way to make sure it doesn’t get caught in the gears, wheels etc. The laces run along the upper to the heel where they can be tightened and then the remaining lace can be clipped down against the heel.

I spent 50 mins on the three sketches seen with 10 mins to spare presenting. Had to rush the last sketch a bit and would have liked to get a bit of photoshop on there but oh well.

My shoe allows for changing conditions while on the ride.
VENTILATION: The shoe has a built in ventilation system similar to air scoops on sports cars. The rider can easily reach down and slide the button back or forward for adjust intake based on temperature. Exhaust blows out the sides.

OPEN HEEL: I left the heel open so the rider can remove the sock all together in extra hot conditions. Or, they can add a water resistant bootie for wet conditions. 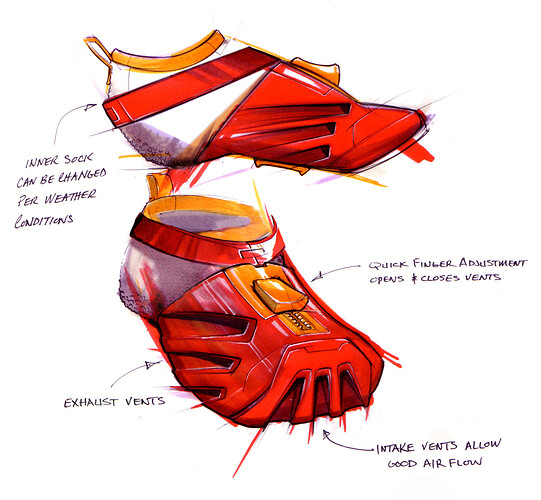 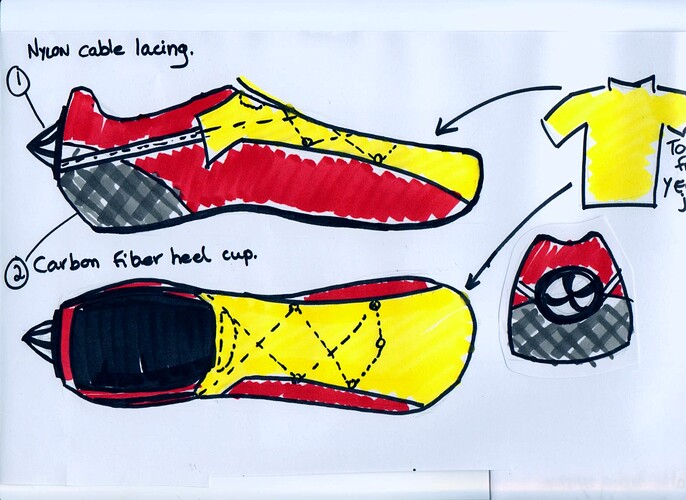 The idea is pretty straightforward. Combine the shoe sleeve with the shoe itself. I am not sure what I was thinking on the styling but it is an hour long competition. 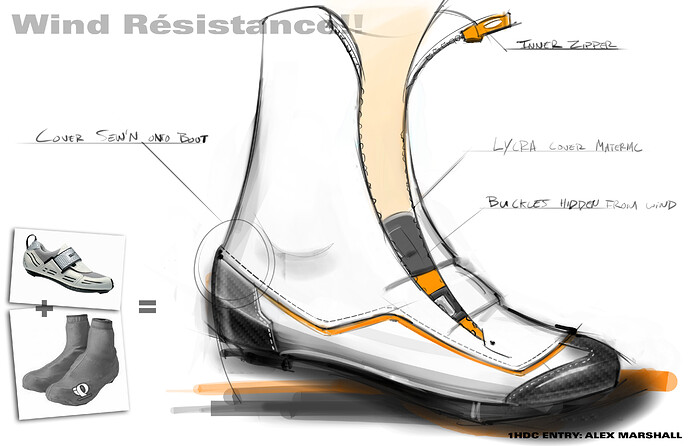 this is actually the first time I post some work here on core. The idea was to have one shoe for each jersey (yellow=allround shoe, white=entry level allround, polkadot= super light for climbers and green=power shoe for sprinters/really stiff).

But there wasn’t time so it’s just the yellow one.

Actually, this is the first proper thing I’ve done in painter after having changed from Sketchbook. I miss SB’s interface, but love the fact that I can spin the canvas to every angel I want without getting the fuzzy lines you get when you do this in SB. 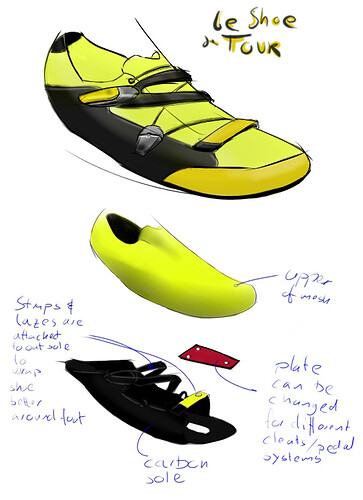 My first shoe in a while, not quite done but I was definitely pushing an hour. 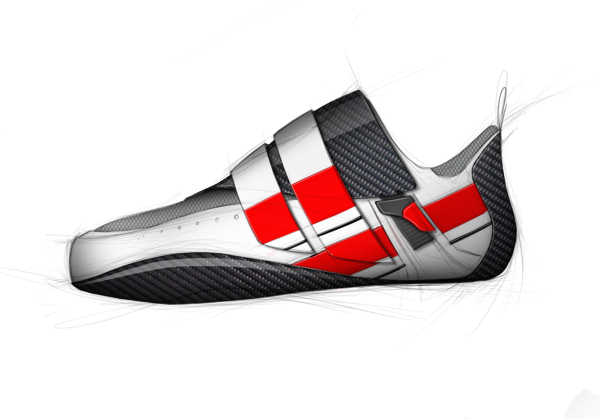 For anyone going the “carbon spaceship” looking shoe route, I think you should see the website below. The shoe isn’t a prototype, or a concept shoe… it’s being made, bought and sold, and it looks fast as can be.
Just as a reference for folks who aren’t up to date on the latest cycling shoes.