Okay, we know that the amount of negative space in the seat shaft is slim, and that the cable’s gonna be similarly slim, but the winner of the most recent One Hour Design Challenge to design a better bike lock is RBAid’s “TheftProof Bike” seat lock system. We liked that this solution embraces and exploits the behavior that people are already engaged in, and the fact is that this concept never failed to put a smile on the face of anyone we showed it to. So charm gets you half-way RBAid, but it would’ve been nice to see some iteration on external coiling, or another approach that preserved the “they’re already taking the bike seat off” insight, but stood up to robustness constraints. (Oh, and bonus points if the spelling of “combonation” was ironic.)

Big thanks to everyone who participated in this 1HDC, and congrats, RBAid! Hope you enjoy your $200 gift certificate at Harris Cyclery! 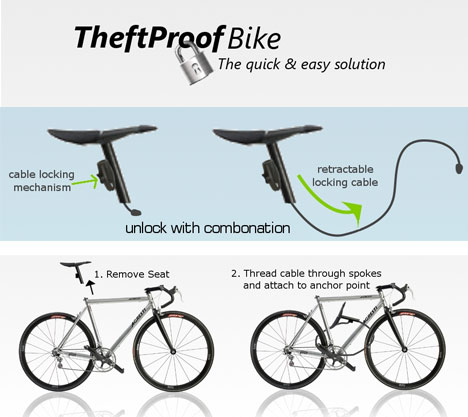 I’m kind of suprised that this was selected as the winner.

we know that the amount of negative space in the seat shaft is slim, and that the cable’s gonna be similarly slim, but

So, basically, you know it is not going to work… but you still chose it? Besides, no one uses a cable lock unless they want their bike to walk.

If I had to pick one I’d go with this one, more for the practical feasability reasons. Good job, congrats.

the amount of negative space in the seat shaft is slim, and that the cable’s gonna be similarly slim

A non-rectrable cable which fits/seats in bottom shaft ( in line with seat shaft)could be the solution.
or A cable just interestingly… tied around the seat shaft.
or Locally bigger seat shaft/shape…till junction…or…

Thus, this design is a potentional solution… addressing to issue.

No better than a regular cable lock, don’t see how this addressed the problem.

hehe…I go away for a week and return to restless natives. C’est la vie.

Without going through all of the entries again, I have to say that I was pretty close to calling this challenge a draw. As in, no winner.

I found that very few of the entries were particularly well presented. Several of the concepts were damn funny (full body plate mail man). None of the ideas stood up and slapped me in the face with their (simple) ingenuity. I thought the winner was closest to that.

As has been stated many times in the past, this is a 1 Hour challenge. The world’s problems won’t be solved. I tend to go for what has a good nugget of an idea that could be polished into more with development. With that said, I don’t select this in a vacuum. Core77 has final say in the selection of the winner.

Now, I do take responsibility for what I believed weighed down this and a couple other challenges. I need to figure out a way to get more “styling” into the challenge without it being a subjective beauty contest…or…is that what would make this truly interesting…hmmmmm

How about if it’s done in a very likely scenario. Present a specific product (you guys would have to make it up and just do a so-so design on it). The contest challenge is to take that “companies” product to the next level (styling while staying within branding constraints, cmf, innovations, whatever).
I mentioned that you guys come up with the initial “product” because if you pick something off the shelf, you’re giving that real company free work. So a fake one with some half-a$sed branding, and let the contestants take it to the next level in 1 hour of concepts. Does anybody think this would be good?

Very interesting concept, Skinny. Definitely more work on the front end…but hey, we all have 28 hours in a day.

I will have to put some thought to this one.