BRIEF:
We all remember when our first Huffy was stolen. The realization that some lazy-eyed cretin had stripped away our freedom all for the purpose of a 15 minutes joy ride hit us like a ton of bricks. Maybe that was just me, but no one can argue that bike theft is rampant. A recent discussion on the Core77 Blog about a Biomega bike that attempts to turn the whole bike into the bike lock is the inspiration for our latest 1HDC incarnation. Can you design a better bike lock in one hour or less? Push aside that looming deadline and pick up your Sharpiesâ€¦.its 1HDC time again! What can you bring to the table to prevent more Huffy Heartache?

Jury:
Winner will be selected by the Core77 Admin. Community discussion is encouraged to help ensure the best design wins.

just had a notion, free for anybody to use as I am not going to draw it up.

“up up and away…” the solution is a 30 meter long piece of kevlar line that is spooled up in a tiny battery powerd winch that is attached to the bike. When you get where your going you look around for something tall, a tree, light post, balcony, sign. You then toss the end of the line over the tall thing and hook the end to the bike. Using the wireless remote (ala keyless entry unit) you engage the winch and zip it up out of the reach of bad folk. When you return, key the winch, lower the bike, stow the line and away you go.

“cant steal what aint there” Using newly developed nanotech light bending materials you render the bike invisible, better have a good memory as its going to hard to find.

“bag o bike” using quick disconncets and a simple folding frame system (been done to death) you put the bits in your bag o bike and hump it into your cube.

“oh god its ugly” take high quality ridig components and dress it up as the most hiddious thing you can think of, smeared with fake dog poo/vomit/colors what ever so even the most desperate would look else where…strong ego required.

have fun, I did

…Thinking about it I should have called it the Huffy Cuff, ah well

I think its pretty self explanatory, based on the snowboard retractable locks, but encouraging modular use, if you dont have too many parts that are worth stealing you could use just one, mount it central, one wire for seat and rear wheel and one for handlebars, front wheel and post (or any combination)… if you have other detachables like panniers or particularly expencive pedals you could use one to lock all the bike parts and one to attach to the environment…

My reasoning for having 2 wires is to minimise the amount of tangleing up your bike parts with wire, often making it difficult to untangle. 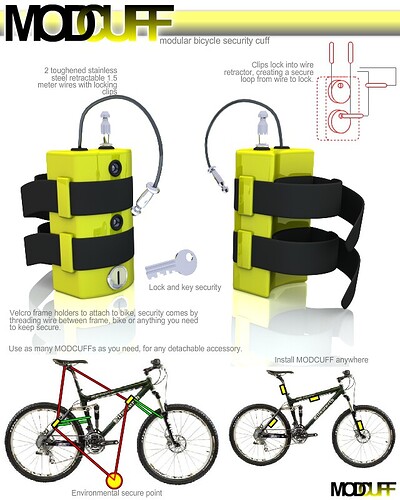 The Vertical Bike Storage System (VBSS) would revolutionize public bike storage and lock up. It would be primarily made of aluminum and could be anodized to correspond with a location point (i.e. a walking/bike trail, map, picnic grounds, etc).
Thank you for giving me the opportunity to share this idea.

My friend did a radio piece on bike theft a while ago and he asked me to think up some stuff. 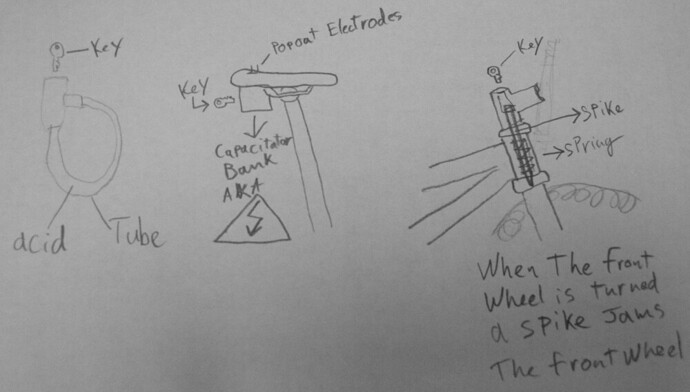 This isn’t a lock idea, but how about a small hidden GPS to track where your stolen bike ends up? It’s done with some high end cars now.
This might find a few other bikes and help with an arrest.
The downside is the price, hopefully they can be made more cheaply.

The Compo-Net is designed to keep your ENTIRE bike locked up. Most bike thefts arenâ€™t of entire bikes but of PARTS that arenâ€™t locked up properly. This metal mesh keeps the wheels, seat, handle bar, stem, pedals, and brakes safe behind lock and key.

Compo-Net comes in a pouch that can be easily carried with an existing lock. The net is removed from the pouch and stretched around the bike. The userâ€™s existing U-lock is used to lock the frame to a secure point and threaded through the net. This keeps the net locked around the entire bike keeping it and its components safe from theft. 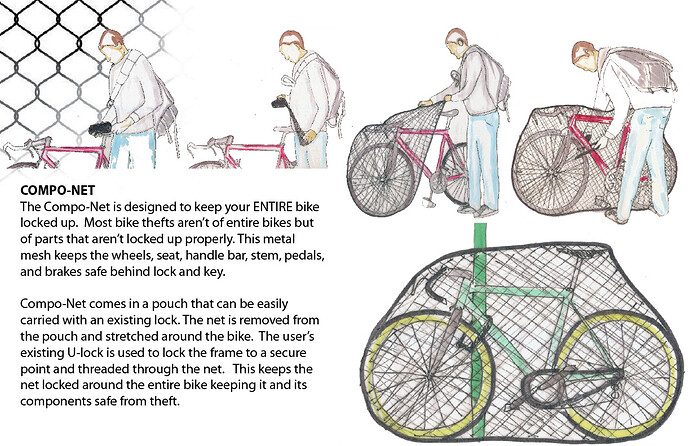 The idea behind my concept is to have a device with a speaker and locking system that will prevent the bike pedals from turning. The device will attach to the bikes down tube and the other half will then be attached to one of the pedals. (This is illustrated by the green box on the bike) The cable will act as a relay conecting the two parts. As the cable is connected to the pedal part it will act as a lock in preventing the pedals from turning but also sound an alarm if a thief is to cut the link between the down tube part and the pedal part.

The device will come with a key chain receiver to turn on and turn off the device. That way one can remove the cable from the pedal.

The main goal was to keep it as simple as possible and yet make it loud enough to deter thiefs. 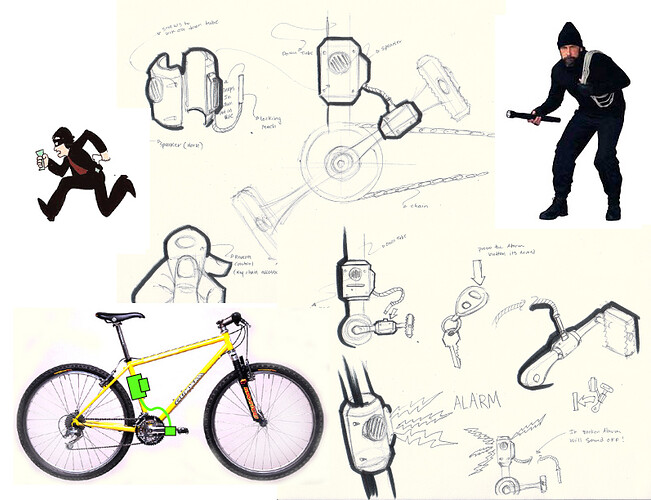 Just a tweek of the kryptonite lock but adjustable. Very similar to a childsafe cabinet lock!! The only problem would be fastening the bike to a secure object using the locks. I’m sure anyone could figure out a way to attach the lock to a normal bike rack. 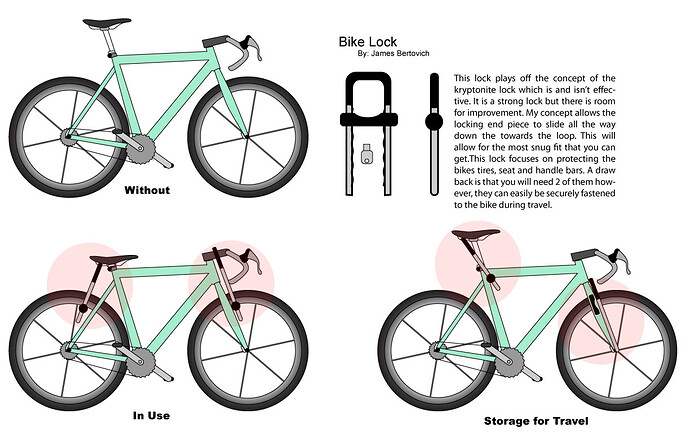 I am just starting to prototype two fasteners that will make stealing bike parts much harder. I have yet to have a full bike stolen, but have had my wheels jacked several times; same experience from my friends (no bikes stolen, many wheels and seatposts/saddles stolen.)

The basic idea is to replace a common hex/bolt size/shape with a much less common one. Replace a 5mm hex with a 2mm button torx, etc.

I am creating a sleeve that fits into a hex bolt head, into which you screw a set screw with an uncommon wrench type (button torx, button hex, etc)

I am also creating a metal sleeve that fits over a regular bolt, into which a set screw has been tapped. Again, unusual set screw size.

The next step would be to make custom/unique set screw/wrench sets. 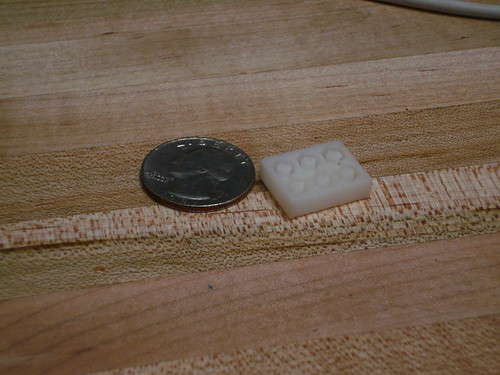 This is a second try to get the images to post. 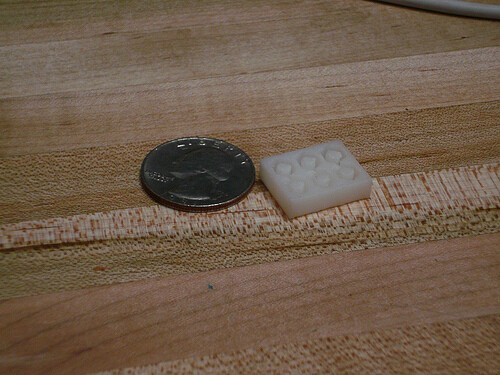 Heres a second attempt… using the youtube from enigma as a bit of a starting point, this is where i got to… i dont think it would stop the angle grinder, but then what would… at least they wouldnt be able to ride away… 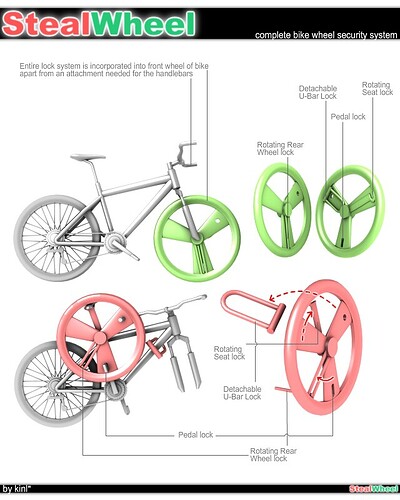 My idea, called MagniLock, uses magnets to lock the bicycle, preventing any thieves from riding it away. Because it uses a magnetic field to prevent the wheels from turning, cutters and saws cannot break the lock. This is how it works:

One very strong magnet is permanently placed on the rim of the rear wheel. When the bike is “locked,” another magnet is attached to the rim of the front wheel. The magnets are positioned so that the opposite poles are facing eachother. Because the magnets are very strong, their attraction prevents the wheels from turning. A key is used to lock the front magnet into place. When the owner wants to “unlock” the bike, he/she takes the front magnet out of its holder and stores it on the the back magnet.

Here are diagrams demonstrating how MagniLock works. Hope you enjoy!: 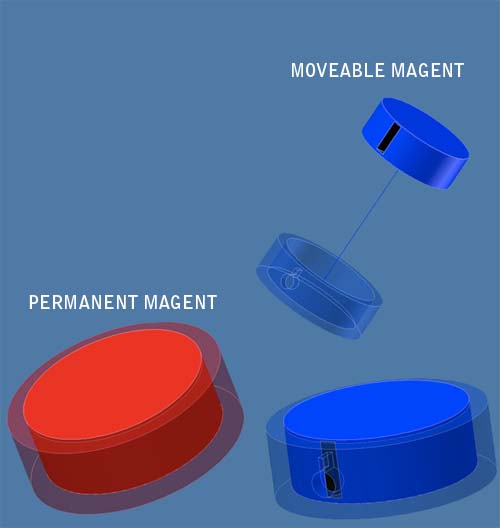 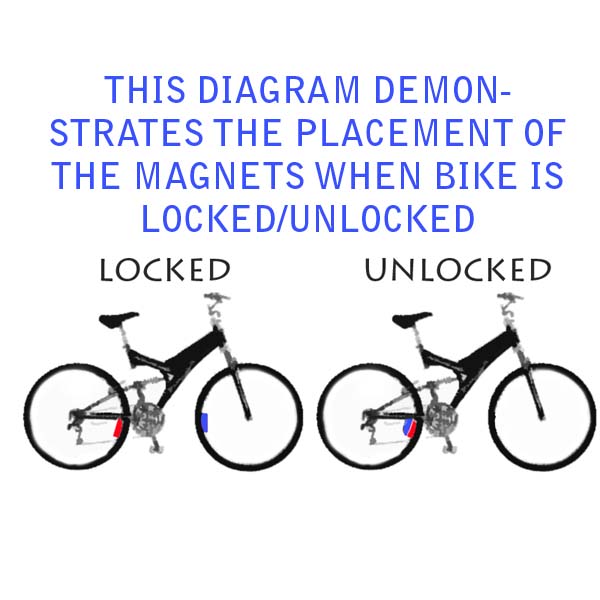 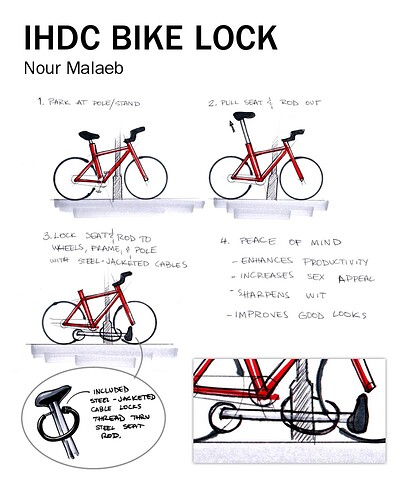 Decided to forgo developing the idea further in favour of some work on the presentation.
There needs to be a way to lock the seat into the bike for when the bike is being used in a way that the ride height is the same and does not require adjusting every time.
Storage of the cable locks still needs to be addressed, but this is not a major issue.

i got some adrenaline going, it was good fun 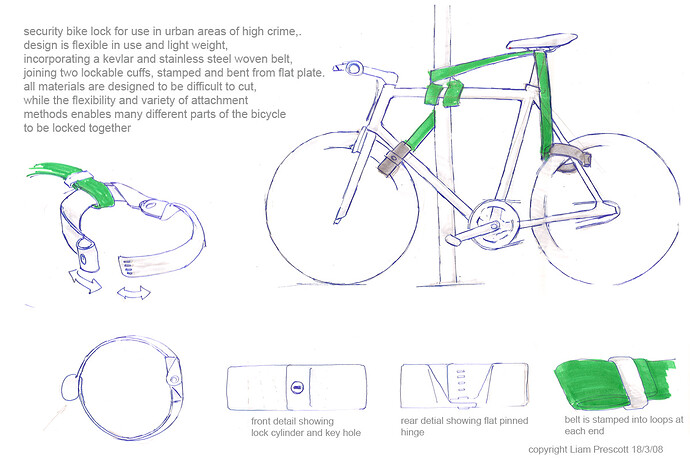 In my perception, if we are looking for solution which is flexible
and has versatile usability not dependent on any fixed structure in
the environment, then most simple locks do enough to protect the bike
from just being pushed away by someone.
So for a basic level of protection, a simple lock which can lock the
bike (the wheels with the body or to some fixed structure around) is
good enough.
Now to protect the bike from being picked up n carried away by
someone, a more technology dependent solution maybe better.
Like one of the members suggested that a device with GPS tracking
would be a good solution but the cost is high.
I suggest similar solutions which are more cost effective and easier
to implement.
One solution would be similar to the security system installed in
cars which starts sounding an alarm if someone tries to mess with the
car. The unit suggested by me for bicycles can be made using an
accelerometer or a gyroscope or a combination of both in a small
compact circuit and mounted on a waterproof device securely attached
with the bicycle. This would detect any motion of the bike after it
has been locked. If there is any motion on the bike caused by an
attempt to steal the bike, the device would detect it and transmit a
warning signal to a small key chain receiver kept with the owner.
The owner can check up on the bike if any such warning signal is
received.
Additionally the device can sound an alarm on the bike to startle the
thief and make general people around aware of the theft happening.
Additionally the device on the bike which transmits a warning signal
on being moved can be used to track down the bike in the same way as
wildlife conservationists track animals tagged with wireless
transmitters.
This device can be powered by battery which can be charged by wall
point chargers or by a small dynamo on the bike itself.
Once this device is activated, any attempt to steal or mess with the
bike is almost impossible to be undetected.
The device can be very affordable and compact.

Thought this article would be of interest, though not the type of solution this challenge is looking for.

Bike Parking Lot, With Attendant, Is Planned for Midtown (Published 2008)

City officials have been trying to create more places where New Yorkers can ride their bikes safely, but finding secure places to park them remains an enduring problem.

A few months ago the " better bike lock" question got stuck in my head, and I thought about it every time I wandered past the hipster bikes in San Francisco’s Mission District. The standard bike lock just seemed like way too cumbersome of a solution. I wondered if you could get rid of all the accessories like the bike lock and pump by “double-purposing” a bike’s existing components. Here are some sketches.
You can see more here at ThinkSketch.Wordpress.com

Thanks for keeping the ideas flowing - Eric 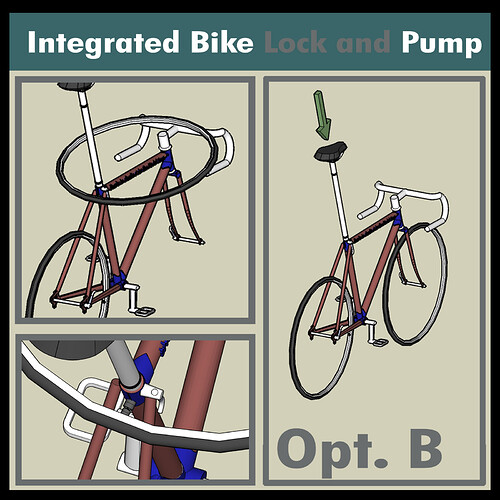 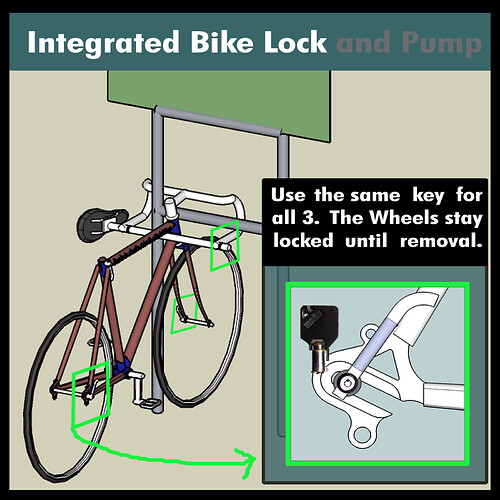