1961 Playboy article about the masters of design

Exuberance, finesse, and high imagination characterize U.S. furniture design today. For the crusading era of modern is over. In the early years of Twentieth Century design, a chair â€“ to its creator, at least â€“ was very much more than something pleasant to look at. An early modern chair was a resoundingly significant expression of the age, a concrete rendition of abstract structural principles, an almost belligerent assemblage of mechanical parts in which every bolt was paraded with all the bravado of Erich von Stroheimâ€™s monocle. Early modern thrived on dogma (â€œForm Follows Function!â€ â€œLess is More!â€ â€œStructure is Beauty!â€) that rivaled Milton in Puritan passion; it paid deepest obeisance to the machine and let the softer human sensibilities accommodate themselves as best they could; and it dwelt, along with pre-Bach and post-Bartok, strictly among the intelligentsia.

The complete article (and some great pics)

I’ve never read an article in playboy, I was always distracted by a couple of things.

I had that image of everybody and their stuff, printed out of a plotter and had it up in my Sr. studio. I also went to the same school at the founder of playboy.

Actually, back then, playboy really did have good articles, and naked girls were really only a small part of the total page count. It was much more of a complete Lifestyle mag with articles on politics, world events, business, etc. than a “lads mag” like todays crap.

I have a small collection of some vintage playboys (mostly late 60’s, 70s, and some 80s, and the quality of the writing and guest articles is actually amazing. One issue I have has an essay by Kurt Vonnegut, another from some former president…

It’s also a great source to check out vintage ads. being targeted to men, it’s full of stuff like stereos, cars, clothing (did you know OJ Simpson endorsed some Jeans, or that Johnny Carson had a clothing line?)…

(did you know OJ Simpson endorsed some Jeans, or that Johnny Carson had a clothing line?)… 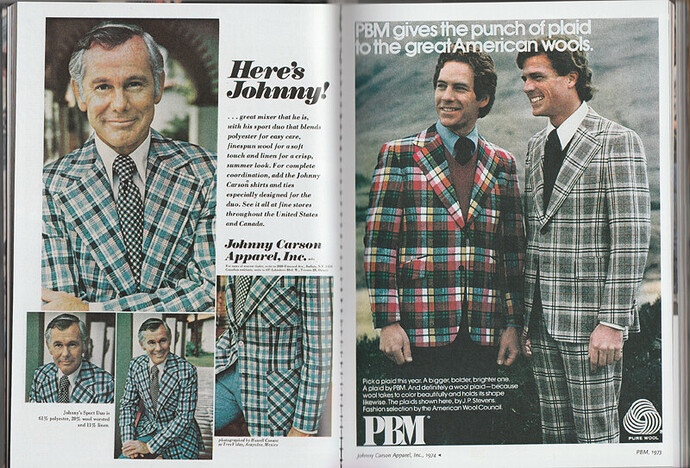 I have never seen something so fashionable in my entire life. I am without words.

I had that image of everybody and their stuff, printed out of a plotter and had it up in my Sr. studio. I also went to the same school at the founder of playboy.

Ed Zygorski, long long time UIUC ID professor has in his collection of (many many stories) a fun one about writing an article for Hef, where Hef changed one word in the article and took a writers credit, good stuff. He wrote Hef many years later and the response was something like, “well was I right?” and Ed thought he was after all.

I love Ed Zygorski. There is a really nice, creepy life like, bust of him in the link gallery. If I were on a desert island it would be with Ed Zygorski, I just don’t think there would be a boring moment . I never heard the one about his playboy article.

it was pre_Playboy, can’t remember if it was the DI or some indy project of Hefner’s, but when Hef was in school anyways.

I think that’s my dad in the PBM ad. He still has that suit. Fly!

That technicolor plaid is incredible. I want it!